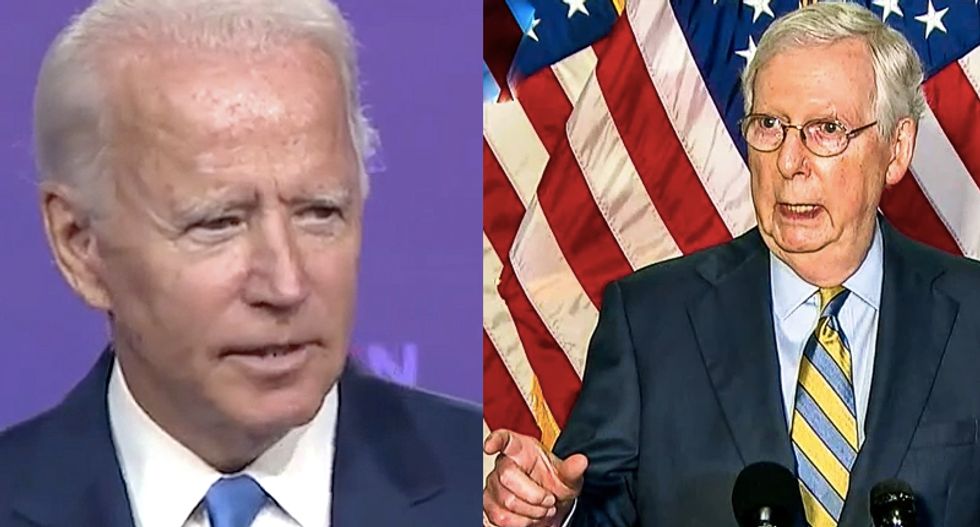 Senate Majority Leader Mitch McConnell (R-KY) has already indicated he won't allow former Vice President Joe Biden to nominate whomever he wants to his cabinet. That means the only hope left for returning to a functioning government is either Democrats have to win the two Senate seats in Georgia or one or two Republicans will have to agree that Democrats deserve to govern as President Donald Trump did.

It "leaves Biden and a small group of less extreme Senate Republicans — if they dare to defy the obstructionism of Senate Majority Leader Mitch McConnell (Ky.) — who might crawl their way to modest legislative packages, such as a stimulus bill, a $15 minimum wage (maybe real economic populism might have some chance), an infrastructure bill and some reforms of the executive branch (e.g., putting up a barrier between the White House and the Justice Department, enhancing Congress’s subpoena power, stripping out emergency powers)," wrote Rubin. "It might even be possible to do more on criminal justice reform, although the scope would be narrow."

Biden could even bring President Donald Trump in on crafting the transportation package that Trump always said he wanted but McConnell refused to allow.

"It is not clear any of that is possible, although Sens. Lisa Murkowski (R-Alaska), Susan Collins (R-Maine), Mitt Romney (R-Utah), Rob Portman (R-Ohio) and Patrick J. Toomey (R-Pa.), who is retiring, might see their way to actually addressing some national problems. Projects such as D.C. statehood would seem to be on hold, barring a 50-50 miracle and filibuster blowup (highly unlikely with a 50-50 tie)," wrote Rubin.

Murkowski and Portman are up for reelection in 2022.

Rubin wondered if there was a voting reform that could be passed that would stop the battle to suppress votes, pass immigration reform that finally creates a pathway to citizenship, rejoin the Paris climate treaty or fully fund disaster relief to states that need it.

"Mostly, however, I suspect Biden is going to be left cleaning up the mess that his predecessor leaves behind — especially getting covid-19 under control, distributing a vaccine if we get one and helping Americans survive economically," Rubin noted. "He and both chambers will be judged on how they accomplish these tasks."

She went on to speculate that Biden's greatest feat could be a return to "normalcy, civility, public discussion and listening." He could apply his pledge to bring people together on all issues "from fighting hunger to refugees."

"He is temperamentally suited to do these things; whether there will be anyone to receive his outstretched hand remains an open question," Rubin closed. "When the election is settled, he might consider getting on the phone (if he has not already) with some Republicans with whom he thinks he might do business."