EXCLUSIVE: 'Blood of Liberty' PAC formed by right-wing political operative looking to rebrand himself as a 'center right' post-Trump player 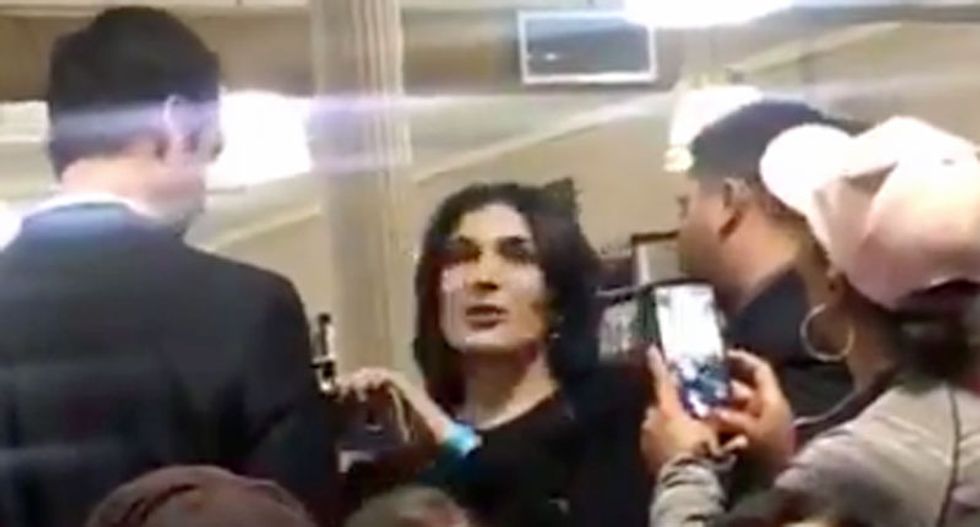 Laura Loomer being escorted out of a bookstore.

The rebranding effort comes in the form of a violently named new foundation and political action committee that Barrish founded this week, the Sang de Liberte Foundation, which translates in French to blood of liberty. Not despite the name, though, Barrish says in an interview that the group is going to be a “center-right” organization aimed at advancing limited government.

That might come as a surprise given Barrish’s background. He was deputy manager for Loomer’s failed 2020 stab at a heavily Democratic House seat. Loomer, of course, is the far-right, anti-Muslim conspiracy theorist who has claimed the Parkland school shooting was a hoax, has described herself as a “Proud Islamophobe,” and has worked with Project Veritas, Info Wars and several other right wing organizations.

Barrish himself has an Islamophobic past: He drew negative local headlines when in 2011, as a candidate for a local court position, he sent a letter to the Council of American-Islamic Relations claiming Islam is  "not a religion" but a theocracy that is "totalitarian and littered with human rights violations," according to the Tampa Bay Times.

"Your efforts in espousing Islam in America and Florida will not succeed," Barrish wrote in the letter. "This is us vs. you. In the great words of the late President Ronald Reagan, 'I win, you lose!'"

But now, Barrish says his new organization will not discriminate, and says he wants to focus the group on marrying conservative fiscal policies and limited government with more centrist social policies, though he declined to say exactly which social policies. Barrish says while he has his own views about social policies like abortion access and gay marriage, the group is brand new and he’s going to rely on a yet-to-be-named board of directors to set the agenda.

“We will not discriminate membership, either officers, board of directors, or committee members, based on even their political ideology. So we will have a wide swath of individuals,” he says. “Democrat, Independent, Republican, Libertarian, those are the kind of backgrounds we're looking at.”

Barrish’s controversial statements on Islam resurfaced in 2016, when he was a regional staffer for Trump’s presidential campaign in Florida. The Associated Press dug up a 2013 tweet in which Barrish mused that although he hoped America wouldn’t spiral into a civil war, “if our freedoms must be defended against a tyrannical government, so be it.”

The Sang de Liberte Foundation’s name references a quote from a 1787 letter written by Thomas Jefferson, in which he wrote, “The tree of liberty must be refreshed from time to time with the blood of patriots and tyrants. It is it’s natural manure.” The tree of liberty has become in recent years somewhat of a rallying cry for extremely online right wing patriot types.

But Barrish said despite the violent imagery in the group’s name, and despite his past comments about a potential civil war, it’s “completely allegorical.”

“I firmly believe that this country is at the precipice of a realignment of political parties, the precipice of people having introspection of where we lie in the state of civics in our country,” he said. “And I firmly believe the name of the Foundation, and allegorical symbology of the foundation, is very representative of where we are as a country in finding ourselves again at the rebirth of the republic.”

Barrish is a bit of a renaissance man, himself. Before signing on to the Trump campaign he was a private security guard and ran unsuccessfully for several local political positions. He also works as a paralegal and manages a travel agency with his wife.

Barrish declined to answer for some of Loomer’s controversial statements, saying he’ll leave that to her, but says he is proud of the campaign and hopes she’ll be able to flip the House seat she lost to Democratic Rep. Lois Frankel in the 2022 election cycle. Barrish declined to specify whether the foundation will donate to his former bosses Trump and Loomer, noting only that the group would boost candidates who are interested in “restoring the integrity and trust of limited government while respecting the rule of law.”

MSNBC "Morning Joe" co-host Joe Scarborough called out House Minority Leader Kevin McCarthy (R-CA) on Friday morning for sucking up to Donald Trump in the belief it will allow him to hang onto his leadership position within the Republican Party, calling the California Republican -- in a word -- "gutless."

Speaking with Morning Joe co-host Willie Geist, the MSNBC host reminded McCarthy of the ex-president's complicity in the Jan 6th. Capitol riot that had lawmakers -- including McCarthy -- fleeing for their lives.

Observing that McCarthy accused fellow Republican Rep. Liz Cheney (R-WY) of participating in "cancel culture" for attacking Trump, Scarborough joked, "Do they get paid money every time they say those words, 'cancel culture'? How stupid can you be? They're blaming everything on, quote, 'cancel culture,' even when it doesn't apply. If somebody trips over their shoelace and falls down, they going to blame it on cancel culture."

"And McCarthy goes to the floor attacking Donald Trump and then, like [Republican Sen.] Lindsey Graham, gets scared, scared of his own shadow and flies down to Mar-a-Lago and takes a picture with Donald Trump," he continued. "Just like [Trump administration U.N. ambassador] Nikki Haley. She dares to tell the truth about him for about three seconds, and now she's going to try to get back in with Donald Trump because he's refusing to meet with her at Mar-a-Lago. It is extraordinary that these people want to meet with the man."

"So my question really is: how sick does a political party have to be? How gutless and directionless does a politician have to be to actually want to be within 100 miles of that guy on the left, " Scarborough said in reference to a picture on the screen with Trump standing next to McCarthy, "who will forever be remembered as the only president ever to call for an insurrection against the United States of America to try to stop a peaceful transition of power and stop the constitutional process of counting electoral votes."

WASHINGTON — South Dakota Attorney General Jason Ravnsborg is refusing to resign, insisting he can do his job while navigating impeachment proceedings and charges of careless driving after he hit and killed a man with his car last year.

Now, one Democratic lawmaker is asking him to prove it — by investigating his boss, Gov. Kristi Noem.