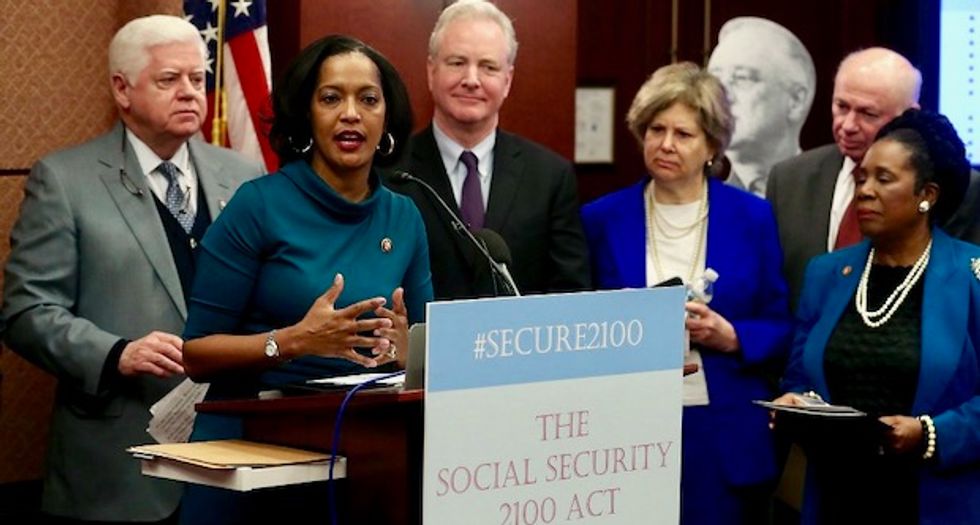 WASHINGTON — During her first reelection bid earlier this year, Connecticut’s first black congresswoman, Rep. Jahana Hayes, was attacked as “too radical” in mailers showing her standing in front of a scene that looks like burning, violent looting and tying her to “the Squad.”

But who exactly paid for the ads that Hayes decried as a “dog whistle” was a secret.

It turns out the super PAC that pushed the ads was entirely funded by a wealthy Connecticut-based film director, who is an heir to a fortune amassed by his father, who had a hand in founding the network that would become Univision and a private satellite fleet used to broadcast stations like HBO, CNN and ESPN.

The donation was not public until now because No Socialism Political Action Committee is what’s called a pop-up PAC. It was created in the disclosure dead zone, after the last pre-election deadline by which federal campaign finance regulators require PACs to reveal their donors. This week, PACs like that began filing their first legally required post-general election disclosures to the FEC, so the contributions became public record.

Reverge Anselmo, of Greenwich, Conn., which is in a neighboring congressional district to the one Hayes represents, gave $100,000 to the No Socialism Political Action Committee on October 19, according to a document filed Wednesday with the Federal Election Commission.

That same day, the super PAC funded $35,047.89 worth of direct mail attack ads against Hayes, according to FEC records. Two days later, the PAC spent another $20,138.83 on the mailers.

Another $25,000 went to a North Carolina-based firm called Saligram and Associates for “fundraising consulting,” while D.C.-based political strategist Jim Dornan took in $15,000 for strategic consulting, according to the paperwork filed Wednesday.

Every election year, PACs like this form late in the election season to fund suspicious ads against opponents, only to reveal the donors, and potential political motivations, after the votes are already cast, said Brett Kappel, a campaign finance expert at the Washington, D.C. law firm Harmon Curran.

Kappel said it’s not unusual for a super PAC to form, take in a massive donation and spend that money all on the same day, because the PACs often pre-plan their activity but don't pull the trigger until after the last fundraising disclosure deadline. In South Carolina, for instance, a mysterious super PAC funded ads spent more than $1 million boosting Sen. Lindsey Graham’s conservative third-party opponent, but was most likely funded by Democratic-leaning groups or donors.

“People who go this route obviously have some reason that they don't want to have their name connected with their political activity,” Kappel said. “The reporting requirements are such that you can time your campaign activity so as to avoid disclosing the identity of the individuals who paid for independent expenditures, if they're made through a super PAC, until after the election is over, so voters have no idea who's paying for that when they go to vote.”

Hayes’ campaign did not respond to a request for comment. But Hayes condemned the ads during the race, posting on Facebook last month that the mailer is a “dog whistle,” and noting that, “When they cannot attack me on substance, they have to double down on fear, hate, and division.”

Though super PACs are legally banned from strategizing with campaigns, the messages often mirror those of the candidates they’re trying to support. That was no different here, as Hayes’ Republican opponent, former federal prosecutor David X. Sullivan, often tagged her as too radical and too close to Reps. Alexandria Ocasio-Cortez, Ilhan Omar, Rashida Tlaib and Ayanna Pressley. Sullivan’s campaign did not respond to a request for comment.

Not despite the attacks, Hayes bested Sullivan in the race by almost 40,000 votes in the district that favors Democrats but is the closest thing to a swing district that exists in heavily liberal Connecticut, where every statewide and congressional office is occupied by a Democrat. Hayes first came to prominence when she was named teacher of the year by President Barack Obama.

Anselmo, who could not be reached for comment, also donated $5,200 to Sullivan’s campaign in May, and has been a steady donor to Republican causes, including to the campaign of President Donald Trump. He donated $730,000 to another super PAC that supported ultra-conservative candidates this year, $300,000 to a Pro-Trump super PAC and thousands more to various PACs and candidates.

Earlier this year he raised a stir in northern California when he donated $100,000 to a candidate in the race for Shasta County supervisor, a donation that local political experts said is probably the largest sum ever given to an official in a local race, according to the Redding Record Searchlight. Anselmo used to own a winery there, but sold it after battles with the county over permitting issues.

Though he lists himself as retired now in FEC records, Anselmo’s main gig was in the film industry. He directed a few movies in the late 1990s and early 2000s, including directing Rachel Leigh Cook, Val Kilmer and Carrie Fisher in his semi-autobiographical story Stateside, about a rebellious rich teenager who joins the Marines to avoid jail time and falls in love with a schizophrenic actress.

Anselmo, who lives in a Greenwich mansion modeled after a famous French château, Marie Antoinette’s Petit Trianon, according to the Greenwich Sentinel, is the son of Rene Anselmo, an Italian-American satellite and television billionaire. The elder Anselmo, who died in 1995, lived and worked for many years in Mexico, then returned to the United States and founded the Spanish International Network network, which later became Univision. He then bet his fortune on PanAmSat, a satellite company that was later sold by his family for $3 billion.