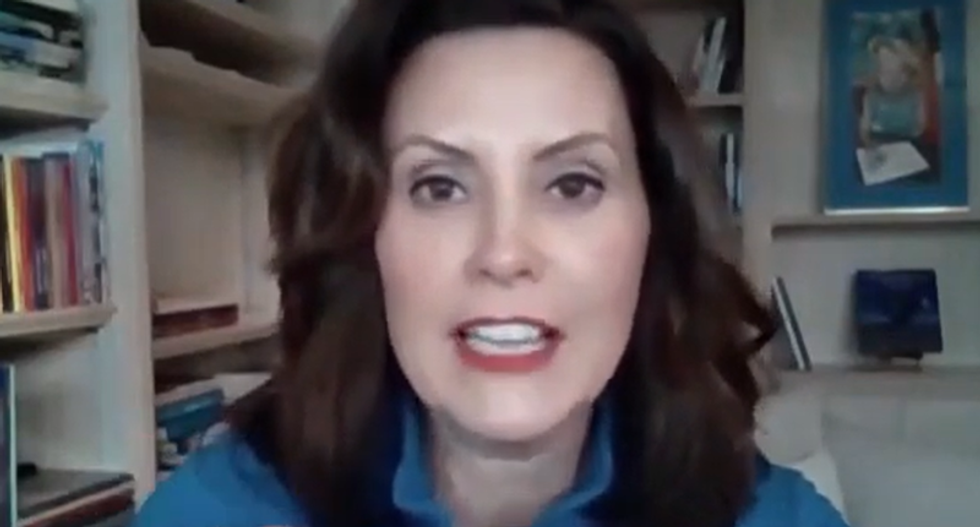 "It actually took my breath away, to tell you the truth."

So said Michigan's Democratic Gov. Gretchen Whitmer on Monday morning after Scott Atlas, a member of President Donald Trump's coronavirus task force, urged the state's residents to "rise up" against new Covid-19 public health measures the governor ordered on Sunday as a way to curb the pandemic's surging infection rate.

Whitmer pointed out that "we are in the midst of the worst weeks of this pandemic. We've been going through this for nine months, and right now, the numbers are as bad as they've been at any given time."

"We have to take aggressive measures," she continued. "With the vacuum of leadership in Washington, D.C., it's on the states' governors to do what we can to save lives and to follow epidemiologists and public health experts."

"They're telling us not to gather indoors, as our temperatures plummet and we're on the brink of flu season," she added. "The modelling... shows that we'll lose another 20,000 people just here in Michigan between now and the middle of February."

In response to Whitmer's announcement of an emergency order that enacts a three-week pause on indoor dining, recreation, and in-person learning, Atlas, a radiologist with no background in public health who has parroted Trump's baseless and anti-scientific views on infectious diseases since joining the White House in August, wrote on Twitter: "The only way this stops is if people rise up. You get what you accept." He included the hashtags #FreedomMatters and #StepUp.

Soon after Atlas attacked Whitmer for attempting to preserve lives, the governor told CNN: "I'm not going to be bullied into not following reputable scientists and medical professionals."

Whitmer's message was reinforced by Michigan Attorney General Dana Nessel, who described Atlas' remarks as "disappointing, irresponsible, and the reason why the United States finds itself in such desperate circumstances regarding Covid-19."

"A patriot," Nessel added, "is one who protects America from its enemies, both foreign and domestic. Covid-19 is the enemy, not each other. Stop pitting Americans against each other and start supporting policies proven to effectively fight the virus."

This statement is disappointing, irresponsible, and the reason why the United States finds itself in such desperate… https://t.co/UuHb3jQVkU
— Dana Nessel (@Dana Nessel) 1605495298.0

Atlas' call for an uprising came just over a month after the FBI foiled a plot by right-wing domestic terrorists to kidnap Whitmer and overthrow Michigan's government, an attempt at violent insurrection that, as Common Dreams reported at the time, many observers said was connected to Trump's intimidating, all-caps tweet to "Liberate Michigan!" in April.

Shortly after federal agents thwarted the far-right threat against Whitmer, Trump at a mid-October rally in Muskegon, Michigan told the cheering crowd: "You've got to get your governor to open up your state," ranting against what he called the "draconian, unscientific" lockdowns that public health experts have recommended to stem severe coronavirus outbreaks and get the pandemic under control.

In response to chants of "Lock her up!" Trump amplified the crowd's authoritarian spirit, saying "Lock them all up," an apparent reference to other Democratic lawmakers who have taken stronger steps than their Republican counterparts to curb the spread of Covid-19 and protect the public's health.

This "is simply incitement to violence," Dr. Abdul El-Sayed, a physician, epidemiologist, and progressive activist and author, said at the time.

Whitmer noted last month that "this is exactly the rhetoric that has put me, my family, and other government officials' lives in danger while we try to save the lives of our fellow Americans."

On Sunday night, Dr. Angela Rasmussen, a virologist at Columbia University, denounced Atlas' statement, pointing out that "actual public health professionals do not incite violence in response to guidelines or policy that they disagree with."

"The purpose of public health," she added, "is to help people, not endanger them."

After several observers suggested that Atlas was, like Trump, encouraging violence against Whitmer, the president's adviser backtracked.

"Hey. I NEVER was talking at all about violence. People vote, people peacefully protest. NEVER would I endorse or incite violence. NEVER!!!" he tweeted three hours after his initial, incendiary message.

As New York Magazine's Matt Stieb wrote on Monday, however, "Atlas' online remarks may actually be less dangerous than the comments he's made within the White House."

"According to the Washington Post, in the early fall he 'advocated allowing infections to spread naturally among most of the population,' a course that the president is functionally encouraging," Stieb noted, "by doing nothing to stop the unmitigated surge of the pandemic in many states."

The disastrous effects of Trump's commitment to a so-called "herd immunity" approach has been on full display in the past week, as the coronavirus caseload in the U.S. increased from 10 to 11 million in only six days while the death toll moved closer to 250,000.

Amid a spike in hospitalizations that has pushed healthcare workers to the brink, elected officials have begun to impose new restrictions in an attempt to slow down disease transmission.

"Michigan is experiencing the fastest growing surge of Covid-19 cases since the early days of the pandemic," El-Sayed said Sunday night on social media. "If this goes unchecked, we could see a huge surge in deaths."

Whitmer's actions "to limit spread will save lives," he added. "It's that simple."