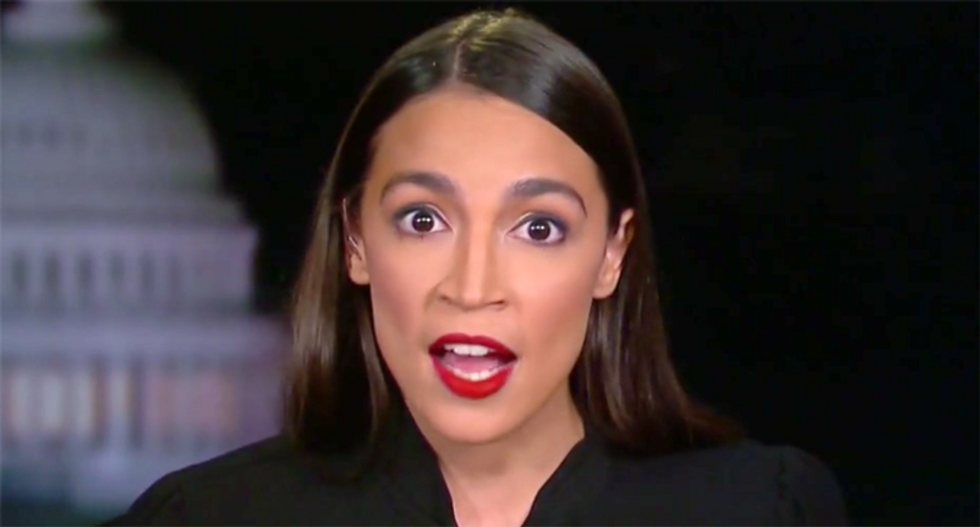 That was the message from Congresswoman Alexandria Ocasio-Cortez midday on Election Day in response to a Politico article detailing how Republican Party lawmakers have remained "publicly silent" on President Donald Trump's repeated attacks on mail-in voting and election integrity despite the reporting which states they are "privately disgusted" over it.

According to Politico, "most Republicans, from critics to allies of Trump, have remained publicly silent" despite months of Trump openly trying to delegitimatize mail-in votes and claiming that valid ballots counted after Election should not be counted.

"It's not new for Trump's party brethren to duck and cover when he says something troubling. But after five years of perfecting the art of explaining how they "didn't see the tweet"—the much parodied talking point to which Republicans on Capitol Hill often resort—it is shocking but not surprising that they aren't speaking up now, even when the integrity of America's electoral system is under attack by their party's leader."

The news outlet reached out to many GOP lawmakers and officials on the issue, but few responded to their request:

Efforts to solicit on the record comment from a broad range of party leaders Monday were met with indifference.

Sen. Ben Sasse didn't respond to a DM. Chris Christie didn’t return a text. A message to the spokesman for Sen. Josh Hawley, an up-and-comer in the party, went unanswered. Sen. Lindsey Graham didn't return a call after POLITICO left a voicemail for him. (Graham's outgoing message offered the option of sending a fax but a reporter did not avail himself of that method of communication.)

White House spokeswoman Alyssa Farah promised to call back but never did. Rudy Giuliani went silent, even though a reporter sweetened the deal by agreeing to hear him out on the Hunter Biden intrigue, a current Giuliani obsession. Karl Rove was kind enough to respond, but he was too busy to discuss the president's comments sowing doubt and mistrust about the sanctity of the election process, because, he said, his "flight is getting ready to shut the door and pull away from the gate."

With official returns in the highly-anticipated election just hours away on Tuesday, Rep. Pramila Jayapal (D-Wash.), co-chair of the Congressional Progressive Caucus, echoed Ocasio-Cortez by suggesting that the GOP's ongoing silence speaks volumes.

"This is exactly the problem," tweeted Jayapal. "Republicans who are silent are enabling all this behavior and we will not forget that. Private disgust does nothing to stop a dictator from stealing an election."

Senate Democrats also weighed in, with Sen. Sheldon Whitehouse (D-RI) accusing his GOP colleagues of having "spines of foam."

#SpinesofFoam: “Many Republicans insist they are disgusted by Trump’s threats, they just aren’t willing to say so p… https://t.co/Nkbj5MLqQo
— Sheldon Whitehouse (@Sheldon Whitehouse)1604436010.0

Speaking with Politico, Sen. Brian Schatz (D-Hawaii) characterized Trump's attack on election as outrage—calling it an "incompetent attempt at autocracy"—but said nobody should be surprised that the modern Republican Party has stood by and let him get away with it.

"There are lots of reasons to believe that what Trump is talking about or contemplating cannot be accomplished," said Schatz. "But if your plan includes congressional Republicans standing up to Trump, you need a new plan."