Rick Santorum-linked plasma company operating out of a condo in line for $65 million for COVID research: report 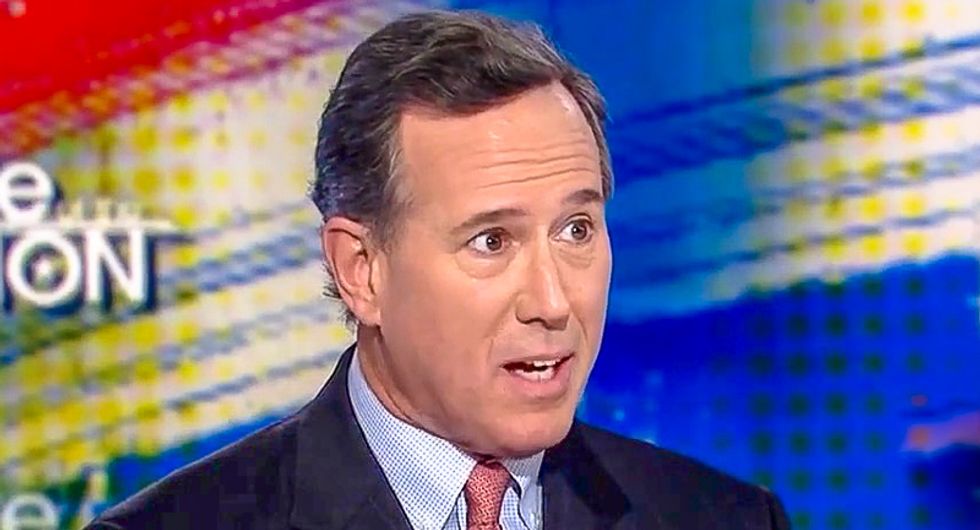 Internal government records obtained by The Associated Press (AP) revealed that Plasma Technologies LLC received seed money to test a possible COVID-19-fighting blood plasma technology and is in line for an additional $65 million by the Trump administration. Former GOP Sen. Rick Santorum, who has a financial stake in the obscure company, lobbied senior U.S. government officials for funding.

The South Carolina company operates out of the founder's luxury condo, according to the AP's discovery, and the $65 million follow-up funding will be granted once a commercial location is operational. Founder Eugene Zurlo is a pharmaceutical industry executive and top Republican donor. Zurlo brought Rick Santorum, who spent 12 years as a GOP senator from Pennsylvania, aboard as a part-owner three years ago.

Santorum pushed his sales pitch for Plasma Technologies in early April before receiving a $750,000 grant from the federal government in August.

When pressed about the influence Santorum might have had on the deal, Health and Human Services (HHS) would not comment. Santorum told the AP that it would have been a “crime” if he hadn’t used his influence to get Plasma Technologies recognized by the federal government. “Shame on me if I hadn’t,” he said.

The Plasma Technologies’ project was a longer-term effort than the federal government hoped to find as a solution. “They were not excited,” Rick Bright, the former director of HHS’ ​Biomedical Advanced​ ​Research and Development Authority, said. Bright filed a whistleblower complaint in May.

Plasma Technologies turned to the Defense Department for additional funding. The AP obtained a copy of the company’s May 28 proposal, which sought $51.6 million to build a plasma fractionation facility in Raleigh, North Carolina, or Atlanta, where the Centers for Disease Control and Prevention is headquarters is located.

Santorum said Zurlo intends to donate any profits generated by Plasma Technologies to charities that support the Catholic Church. Santorum, on the other hand, said he has no plans to invest in the Catholic Church from the deal, instead needing to pay himself back.

“I have made no such claims as a father of seven who has three weddings this year,” he said. “If any money were to come, I would welcome that money to help pay my bills.”

According to CNN's chief medical correspondent Dr. Sanjay Gupta, comments made by Gov. Kristi Noem (R-SD) over the weekend about pills used to induce an abortion should be taken with a grain of salt, adding that the GOP governor was overstating the dangers of using them.

On Sunday's "Face the Nation" Noem said she would like to block online appointments and stop women from buying prescription abortion pills online and receiving them through the mail, telling host Margaret Brennan, "These are very dangerous medical procedures. We don’t believe it should be available because it is a dangerous situation for an individual without being medically supervised by a physician.”