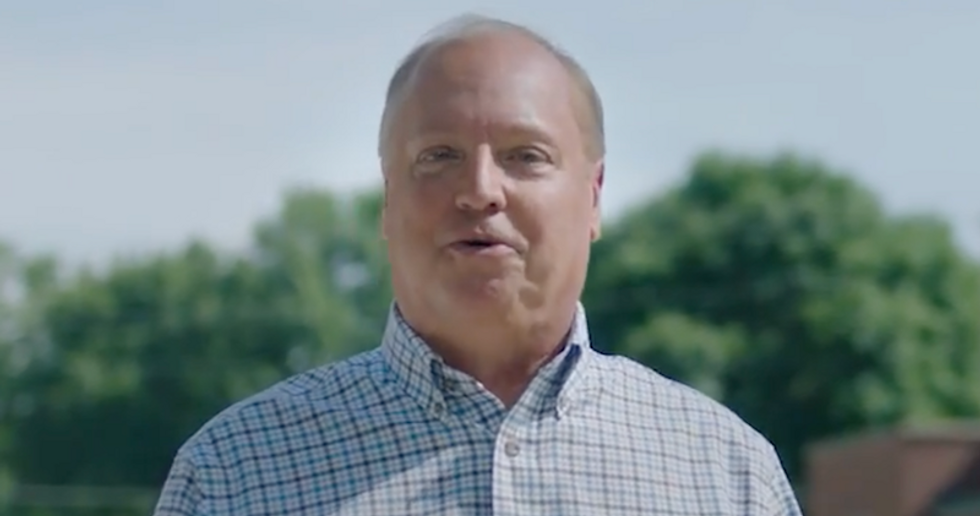 Scandal-plagued Republican Rep. Jim Hagedorn defended himself against a report that he appears to have made use of rent-free office space care of a campaign donor by telling the local press last month the story was nothing but partisan lies.

But a closer look reveals inconsistencies in his campaign’s explanation for why it appears to have made no payments for use of an address in a building once owned by and currently managed by a large campaign donor, an arrangement that could be a violation of federal election laws and House ethics rules.

An expose in Politico last month noted the Minnesota Republican had disclosed no payments for use of a campaign headquarters in Mankato, Minn., despite listing the building’s address on federal election records since 2013 as the campaign’s headquarters and despite photos posted on various social media accounts and news outlets showing the campaign using a space there for at least several months in 2018. Campaigns are required to pay fair market rate for any facilities they use, according to election laws.

The campaign, however, released a statement at the time to Mankato television news station KEYC calling the premise of the story false.

However a newly revealed document obtained through the Freedom of Information Act shows the postal service could find no record of any such dealings with Hagedorn or his campaign.

KEYC attributed the following statement to Hagedorn’s campaign, in an article published October 12:

"The campaign has utilized a USPS post office box, associated with Suite 007, beginning in 2013. The P.O. Box remains in use today, and all arrangements are made directly with USPS. Suite 007 is not a room or office suite; it is a P.O. Box. Thus, the article’s premise is blatantly false.”

“Based on your description of records sought, a search was conducted of the files maintained by the Mankato Post Office. Despite this diligent search, we were unable to locate responsive documents,” Rachel Christensen, USPS manager of consumer and industry contact in Minneapolis, wrote in a letter delivered last week.

Hagedorn’s campaign said in a statement Monday that any allegations it has failed to disclose illegal contributions are “phony” and “made-up” by “biased liberal media” to “hurt the Hagedorn campaign.” Even so, it seemed to confirm in the same statement that it did indeed use a mailbox in the historic Mankato building known as the Brett’s building free of charge.

"As the Friends of Hagedorn campaign has stipulated consistently, the key to the Post Office Box associated with the address ‘11 Civic Center Plaza, Suite 007,’ was obtained from the Mankato USPS office by a Hagedorn staff member in 2013. The Brett’s building owner, for 26 years, never charged anyone for use of the P.O. Boxes in the building,” the statement said.

A postal service source noted that whatever box Hagedorn’s campaign was using wasn’t a post office box, because the postal service doesn’t actually maintain any boxes associated with that address.

The Hagedorn campaign declined to answer when asked in a follow up question whether one of these cluster mailboxes is what it meant by “P.O. Box.”

The postal service’s comments seem to confirm what is also apparent in publicly available campaign finance reports maintained by the Federal Election Commission: The Hagedorn campaign has reported no payments for a use of a post office box.

Hagedorn would have had to pay a fair market rate for any space used by the campaign. The building where he has listed his address was up until last year owned by a large donor to his congressional campaigns. Hagedorn also maintains his official congressional office in the building, but he would be forbidden from getting additional space for his campaign as a result of that contract.

Any free or below market use of space would have to be reported to the Federal Election Commission as an “in-kind donation,” which is a donation of goods or services, rather than money. But Hagedorn’s campaign hasn’t reported any such donation from the current or former owner of the building. The campaign also said it had paid the former owner for temporary use of a space for a campaign office in 2018, but FEC records show no such payment.

The campaign says it does not have a physical office. However, FEC records reveal that the campaign has paid for “Internet” from Charter Communications, a company that services Mankato. The company made a payment as recently as last month to the company for internet service.

A representative for the internet service provider previously told the Minnesota Reformer that it does indeed service 11 Civic Center Plaza Suite 7 and has done so since April 2019, which corresponds to the date the Hagedorn campaign first began making payments for internet service.

“Hagedorn took potentially illegal campaign contributions from a wealthy donor and paid him with tens of thousands of dollars in our taxpayer money,” the Feehan campaign posted on Facebook last month after the Politico story ran. “Worse yet, when asked about it, he and those around him continue to lie and cover up.”

Democrats’ campaign arm and left-leaning outside groups have spent millions of dollars in the district, listing it as one of their top targets for a Democratic pickup in Tuesday’s elections.

The district overwhelmingly voted for Trump in 2016, but Hagedorn won his race over Feehan in 2018 by less than one percentage point. The race had been rated either a true tossup or a Republican leaning contest at the outset of the election season, but election prognosticators such as CNN, Inside Elections and Sabato’s Crystal Ball have tilted the rematch in favor of Feehan in recent weeks after the ethics allegations became public.

Ethics experts believe Hagedorn more than likely broke ethics rules or campaign finance laws several times in his short stint in office: In addition to the campaign office controversy, Hagedorn has paid hundreds of thousands of dollars of taxpayer money to a company owned by his staff member and another company that kept its ownership private, according to findings first revealed by the Minnesota Reformer. Hagedorn financed an internal review of the matter, which found the company is owned by the brother of Hagedorn’s chief of staff.

Hagedorn fired that chief of staff, and reported the issue to the House Ethics Committee. A Democratic-linked group and a Minneapolis lawyer have also filed ethics complaints to the Office of Congressional Ethics, an independent body that investigates claims of corruption and makes recommendations to the Ethics Committee about cases it should investigate further.

That means if Hagedorn wins reelection, he’s likely to face a costly ethics probe at least sometime in his second term. Already, Federal Election Commission records show he has spent more than $20,000 of political donor money on a lawyer to look into the ethics allegations. There is nothing unethical about that; congressmen are allowed to spend campaign cash to finance lawsuits.

However, if Hagedorn loses, the issue might just go away. The Ethics Committee does not consider former members part of its jurisdiction, so it typically doesn’t investigate after a member has left office.

2020 Election Raw Exclusives SmartNews
Report typos and corrections to: corrections@rawstory.com.
Like this article ? Text `Support` to 50123 to donate.
READ COMMENTS - JOIN THE DISCUSSION