'Time to put Rudy in a home': Trump mocked for choosing Giuliani to lead his election lawsuits 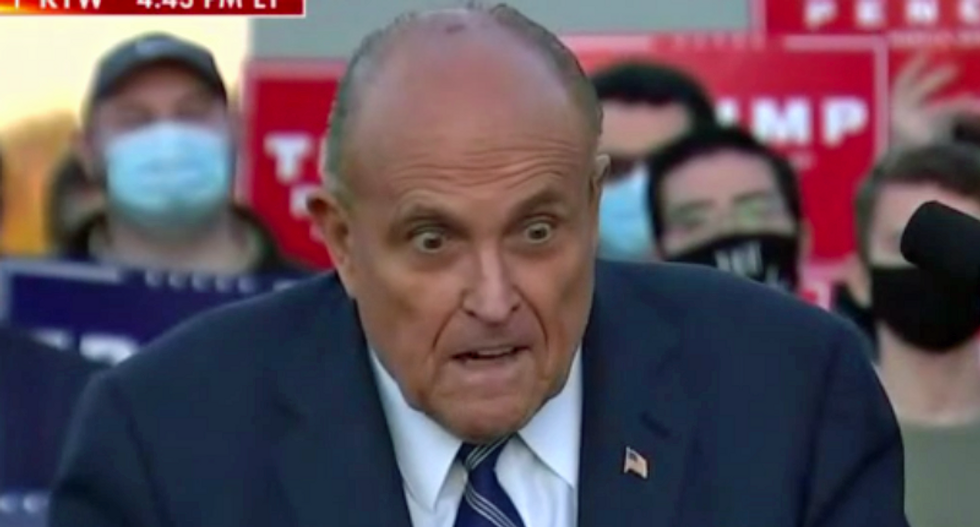 President Donald Trump's son Eric announced that former Mayor Rudy Giuliani would be part of the legal effort to fight the legal battle to hand the election to the president.

Given Giuliani's scandals over the past several months, it was something that many questioned. His credibility is something that has been questioned after he attempted to create a scandal in Ukraine that ultimately got Trump impeached. Giuliani then has struggled to create another scandal with a mystery laptop allegedly belonging to Vice President Joe Biden's son. The problem, however, is that no one ever proves that the laptop belonged to the younger Biden nor could they get their stories straight about what was on it or where the laptop came from. It has since become a joke.

See the responses to the news that Giuliani is taking on the legal battle below:

#ABCNews Why is the deranged Rudy Guliani being given airtime? He clearly hates democracy and thinks he or Trump pe… https://t.co/UFlo1pqSsJ
— Steve Ellis (@Steve Ellis) 1604526675.0

Rudy Guliani losing the rag live on @SkyNews and claiming that the @GOP have won the election and @TheDemocrats hav… https://t.co/NGhscQ4654
— Connor Bellshaw (@Connor Bellshaw) 1604526651.0

Rudy Guliani chatting absolute air about voter fraud with nothing to back it up. People will eat his rhetoric up though.
— James Hockaday (@James Hockaday) 1604526435.0

Fuck Rudy Guliani. Inciting violence and unable to accept a pending loss. What a complete waste of a human.
— Trump Resistance (@Trump Resistance) 1604526562.0

Rep. George Santos (R-NY), whose own background is a mystery lost in a cascade of falsehoods, previously espoused "birther" conspiracy theories about Barack Obama's origins while promoting Donald Trump's 2020 campaign.

The embattled New York Republican, who has admitted fabricating key elements of his biography, shared his theories on Obama's birth certificate in a newly revealed video, reported CNN.