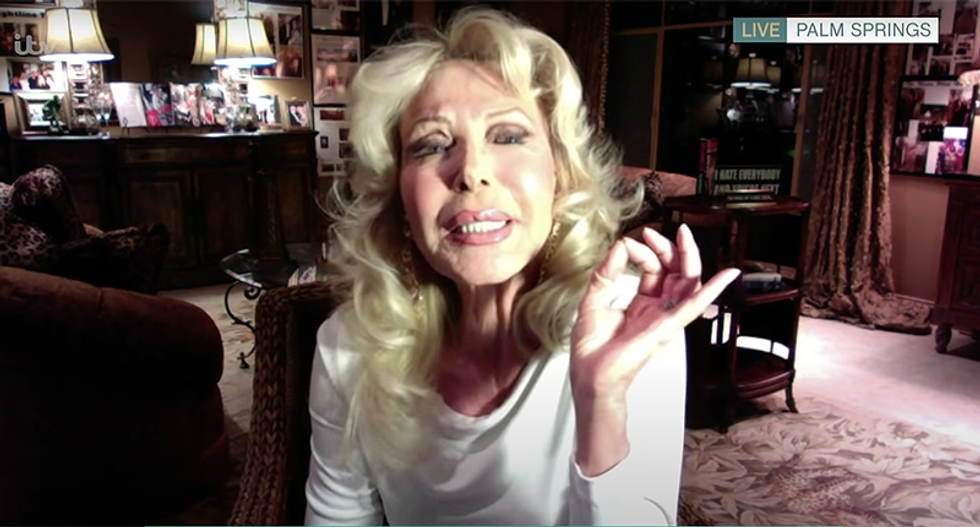 One of President Donald Trump's supporters had an uncomfortable interview with a British news outlet in wake of the U.S. election.

Trumpette leader Toni Holt Kramer appeared on "This Morning" only to be schooled on her manufactured reality, the Manchester Evening News reported.

"Before you go any further, I must say to you, you've got the facts all wrong," Kramer said at the top of the interview. "Also I'm at the White House, I go very often, I've known the President for ten years – before he ran for President. The president had an absolute right to say what he said, because we have all been watching all day and all night at the results coming in and if you had followed the numbers...."

Kramer appeared to be in Palm Springs, according to the live shot, and the scene behind her didn't look anything like any room in the White House. It does appear to have the exact same photos on the wall, side-cabinet and lamps as a video of Kramer here:

"President Trump did a phenomenal job for helping minorities... something that Obama and Biden should have done but… https://t.co/iIwvogCRMO
— Channel 5 News (@Channel 5 News) 1604430269.0

Host Phillip Schofield tried to interject to get his questions in, "We have limited time, I don't want to get into all this, so listen, no no no, you have to listen now."

Kramer refused to allow him to speak, "I want to talk to you about what the president said today."

"Do you not listen to anything?" he asked. "So you have to stop. Stop! Let me ask you a question."

"With the greatest of respect you haven't answered the question," said Schofield. "Which is the fact that [Trump] was directly challenging the democracy of the United States by saying that people who had legally and legitimately cast their vote could not have them counted."

"You are not asking a proper question and I will tell you why," Kramer demanded.

Co-host Holly Willoughby interjected, adding,"But it is a fact!"

It devolved into chaos from there as British residents observed what Americans have been dealing with for the past four years.