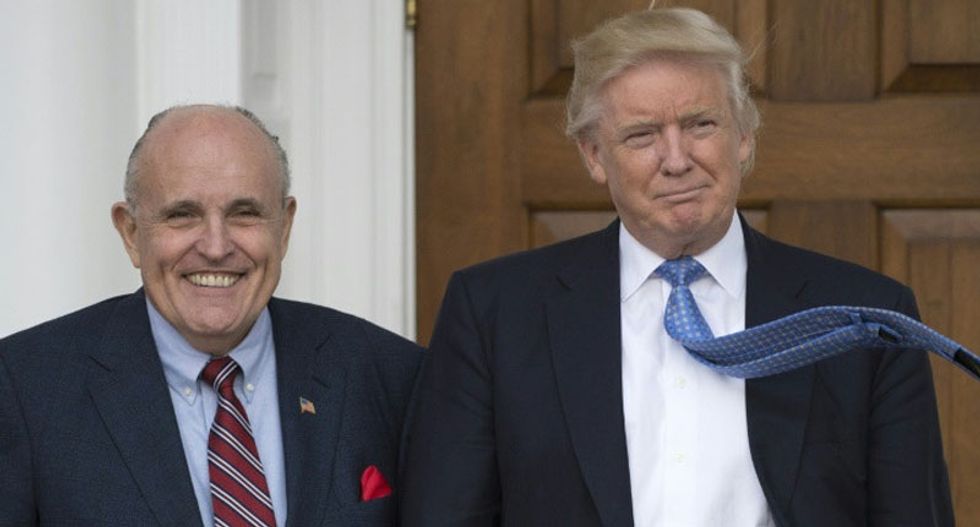 "I'll add this about the recounts," Wallace began, "I just hung up with a Trump adviser who says that these legal efforts do not really have the imprimatur of the late Warren Christopher and the James Baker sort of statesmen arriving on the ground in Florida the morning after the election there. That these do not seem like the kinds of legal fights that are attracting talent beyond people with the last name Trump and one Rudy Giuliani, who showed up in the state of Pennsylvania. So, just a little bit of evidence about the view even from inside Trump's side about the caliber of legal talent and legal arguments being made in lawsuits that were described to me as very much driven by the client himself without a lot of basis in any sort of consistent legal philosophy or argument at this point."

Maddow noted that legal advice to a president or a presidential campaign is generally considered prestigious, but in Trump's case, that is not happening.

"I asked a lawyer associated with us here at MSNBC today, not an on-air person but some who works off-air, to have a look at the complaint the Trump campaign filed in Michigan to try to stop the vote in Michigan. And that lawyer described it as something that looked like it was written by an elementary school student and something that did not actually have any of the predicates of a basic legal document, including the who, what, where, why, when of what they were alleging was the reason the court should step in and do something."

Maddow called it an "interesting" factoid in terms of what campaigns are bringing to the fight. Biden's team had thousands of lawyers lined up to take on whatever the Trump team could throw at them. The Trump campaign appears only to have Attorney General Bill Barr and Rudy Giuliani.

"It also makes me wonder if Republicans are so confident now -- that there are so many conservative judges now that they have done such a good job in the federal courts stacking it with ideological, very right-wing, in some cases very young partisan-minded federal judges, that they've got a path even if what they're filing is just trash," Maddow questioned.

Wallace agreed that the question was an interesting one, noting that it's a conversation that should be had after the election. She wondered the degree to which "the courts are so contaminated by what Trump has said out loud he wants them to do" that they can't make a legally sound ruling.

"Trump said last night he's waiting to get this to the United States Supreme Court," Wallace continued. "No matter what they do, I think they are forever tainted by the notion that Donald Trump, who picked three of them, believes that they are sitting there waiting until one of these ludicrous, as you said, juvenile lawsuits makes its way to them. Whether they act on that or not doesn't matter. That is how Donald Trump described them, not just to his supporters but to the world. That is how he sees the United States Supreme Court."

She explained that it remains clear that Trump's own legal team can't come up with a legal theory as to why the vote-counting should stop in states like Arizona, much less what Trump wants to happen in Michigan and Wisconsin. The president simply wants counting to stop.

"So, there isn't a legal argument," Wallace said. "There isn't a legal through-line. So, even if you were sort of at the ready for Trump, a willing appointee waiting to do his political bidding, which I think is a reach even for the kinds of folks that he's put on the court, it's not clear what the philosophical, legal case is that's being made in the courts."