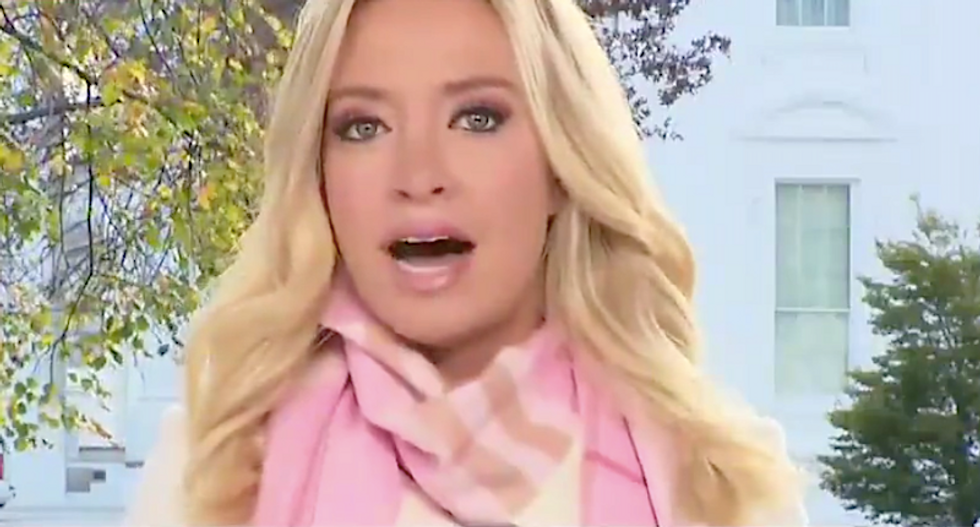 White House press secretary Kayleigh McEnany promised President Donald Trump would do better in his fight against the coronavirus in a second term.

McEnany appeared Wednesday morning on "Fox & Friends," where she made false allegations against Joe Biden -- the projected winner of the election -- and casually insisted that Trump would serve another four years.

"I'd say this with respect to COVID, this president has done a vaccine in record time, ready to be manufactured, already manufactured, but ready to be distributed on a task force that's done an excellent job, a stockpile that was left empty by Obama-Biden that he's filled up since then," McEnany said.

Two companies -- Pfizer and Moderna -- have recently developed vaccines that could be approved for use by next month, so of course no stockpile could have been available for the previous administration, which Trump has falsely claimed had neglected the national stockpile of medical equipment.

"He's left an infrastructure in place where COVID can be handled, and we believe we will do so going forward in a second Trump administration," she said.

McEnany then complained about measures taken by states to prevent coronavirus from spreading further over the Thanksgiving holiday, as the pandemic rages out of control in nearly all 50 states.

"I think a lot of the guidelines you're seeing are Orwellian," McEnany said. "Let me start by saying the CDC has put out considerations as we prepare to go about Thanksgiving, about socially distancing, wearing masks, doing what you can, and there's a whole link of very good considerations, and in that they say we're not recommending a certain number of people, but we are giving considerations we think you should put in place. The American people know how to protect their health. It's Orwellian in a place like Oregon to say if you gather in numbers more than six, we might come to your house and arrest you, and you get 30 days of jail time? That's not the American way. We don't lose our freedom in this country, we make responsible health decisions as individuals."

Oregon's Democratic Gov. Kate Brown has issued a two-week "freeze" order that limits social gatherings to six people from no more than two households, and violators could face up to 30 days in jail or a fine of up to $1,250, or both.

Those same penalties applied during Brown's stay home order in March, although it's not clear they were ever imposed, and there's no indication the state would raid social gatherings as some Republican elected officials have claimed.