White nationalists and conspiracy theorists rally in DC -- 'they were urged on by Trump': reports 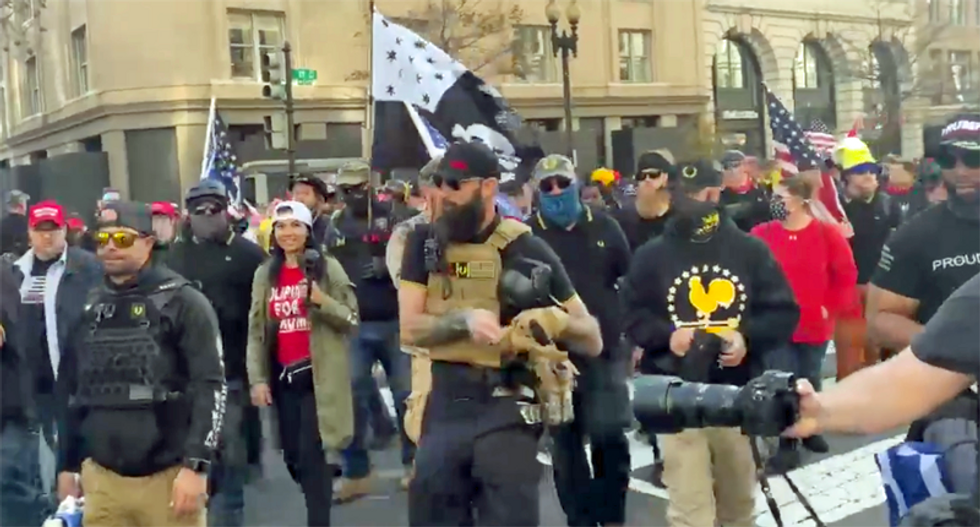 Supporters of President Donald Trump rallied in Washington, DC on Saturday -- one week after the networks declared President-elect Joe Biden the winner of the 2020 presidential election.

The rally was covered by The Washington Post under the headline, "Thousands of mask-less Trump supporters rally in D.C., falsely claiming president won election."

"They were urged on by Trump, who refuses to concede or allow a formal transition to President-elect Joe Biden to begin. On Saturday morning, as his devotees remained in D.C. to fight for him, the president headed to Trump National in the Virginia suburbs for a round of golf," the newspaper reported.

Thousands of Trump supporters are here in DC for the “Million MAGA March.” So far I’ve seen plenty of Proud Boys, Q… https://t.co/ZHvvMlPWef
— Will Sommer (@Will Sommer)1605371370.0

"The president’s backers, who include white nationalists, conspiracy theorists and far-right activists from across the country, carried Trump flags and signs demanding action that was already being taken: 'Count the legal votes.' One man, dressed in camouflage and a red 'MAGA' hat, waved an American flag attached to a baseball bat," The Post reported.

Out in DC for the MAGA protest. There are thousands here and signal is jammed so my posting will be a bit delayed.… https://t.co/TGeiaAtrxU
— Tess Owen (@Tess Owen)1605372054.0

"On a day when the president’s supporters touted a vast array of falsehoods, his spokeswoman, Kayleigh McEnany, offered perhaps the most ludicrous. 'More than one MILLION marchers for President @realDonaldTrump descend on the swamp in support,' she tweeted, exaggerating the crowd size by a factor of about 200," the newspaper noted.

"Among the protesters were members of the Proud Boys, an extremist group known for their black and yellow colors and endorsements of violence. Some wore flak jackets and helmets. 'Stand Back, Stand By,' read some of their shirts, referencing the president’s directive to them at a September debate," the newspaper noted.