White woman with Taser threatens family: 'You're acting like Black people and you shouldn't' 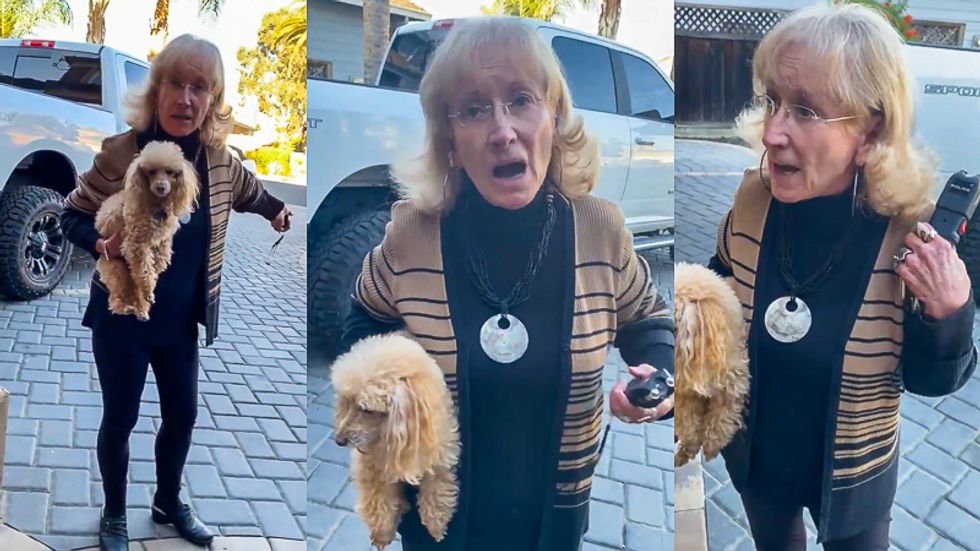 A white woman in California threatened a Black family during a dispute about their dog.

Video of the incident, which occurred in Discovery Bay, was shared on social media.

As the video begins, the woman can be seen confronting a Black man in front of his home. She alleges that the man's dog had assaulted her dog, but he denies it.

"We were raised around Black people and most of them were very nice," the woman says before threatening to call the police.

"Everything is on camera," the man replies. "I'll be happy to show them."

"Why are you so nasty?" the woman complains.

"You came over here to my house, on my property," the man says calmly.

"All you've done is been negative!" the woman exclaims.

"I'm going to ask you to leave my property," the man replies.

As the confrontation continues, the woman repeats her racial taunts.

"You guys are acting like Black people and you shouldn't," the woman opines. "You should act like white people."

"Most people don't act like you do," she adds.

"You came over here with a Taser," the man points out.

The Twitter user later explained why she had shared the video, which had been viewed over 100,000 times.

"This woman charged after me and my brother multiple times with a taser, got in our face, yelled racial slurs at us SO YOU GOD DAMN RIGHT IM GONNA MAKE HER FEEL THIS SHIT," Jariell wrote. "Can’t even feel comfortable in my own damn house. White ass amerikkka."