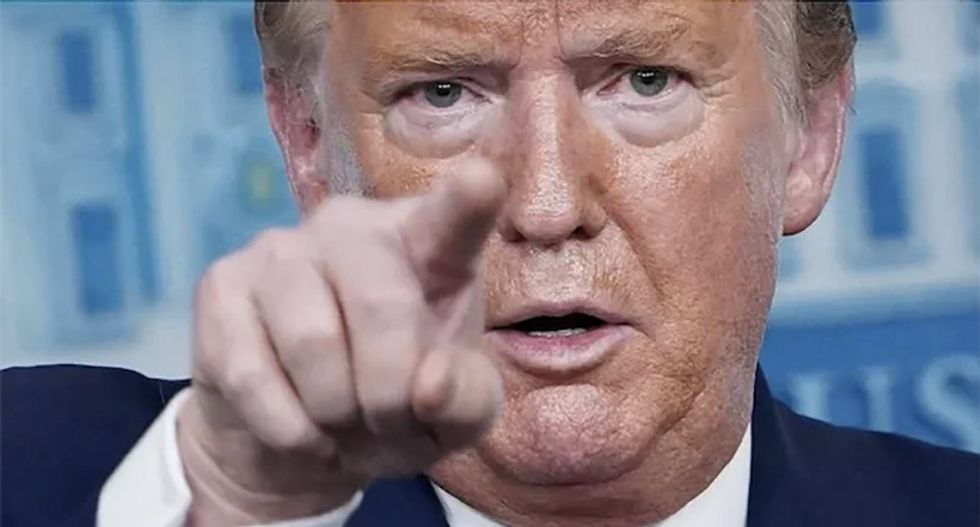 President Donald Trump's supporters flooded the streets of Washington, DC over the weekend to dispute his 2020 election loss and show their allegiance to their candidate. Unlike women who came to Washington with pink, knitted hats with cat ears, Trump's supporters came armed and ready for battle.

CBS News reported several injuries "including eight police officers who were injured and four people were stabbed near Black Lives Matter Plaza." No one was killed but the stabbing victims were hospitalized, police said. NBC Washington reported 33 people were arrested.

Washington Post reporter Eugene Scott couldn't help but notice that the language around these incidents seems dramatically different from what conservatives said when they characterized Black Lives Matter and civil rights protesters.

Trump frequently refers to Black Lives Matter as "thugs" but he was among many conservatives who refused to denounce the violence over the weekend.

The thugs who accosted Senator @RandPaul and his wonderful wife, Kelly, together with those who made threats to man… https://t.co/evjGrOikJl
— Donald J. Trump (@Donald J. Trump)1598753734.0

Trump said the same thing about the immigrant caravan marching to the U.S. border.

Our military is being mobilized at the Southern Border. Many more troops coming. We will NOT let these Caravans, wh… https://t.co/tVJx5Jw5kQ
— Donald J. Trump (@Donald J. Trump)1540989936.0

"But now that violence seems to be a recurring part of pro-Trump protests — there were incidents of violence at the November protest of Trump supporters in D.C. following the election — the president and many other conservative elected officials have largely gone silent," wrote Scott. "The harshest critics of the president will interpret this lack of response as some type of support."

He recalled Trump refusing to denounce the Proud Boys during the presidential debates, instead, telling them "stand back and stand by." The Proud Boys turned it into a t-shirt and rallying cry, standing at the ready. There was also the infamous moment in which Trump was questioned about the tiki-torch-waving neo-Nazis and white supremacists in Charlottesville, Virginia. He explained that despite the right ramming a crowd with his car, killing 32-year-old Heather Heyer, there were "very fine people on both sides."

As NBC News explained at the time, such language has "long been used to discredit civil rights movements."

After right-wing press hammered Democrats for weeks, demanding they denounce the rare cases of protester violence, none have followed up with Republicans in Congress about whether they denounce the violence at the hands of the Proud Boys in Washington.

"As long as those involved in physical disruptions are showing their loyalty to him, Trump appears willing to turn a blind eye to the harm that they cause their fellow Americans," Scott closed. "And that will continue to be an issue of concern for Americans who are looking forward to a peaceful transition from this administration to one led by a candidate who launched his presidential campaign criticizing Trump’s support for violent white nationalists."