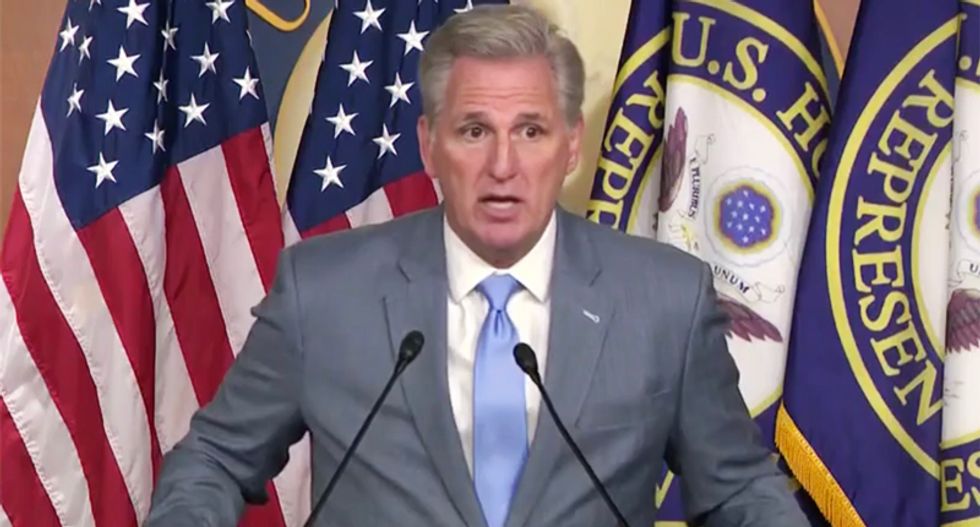 Conservative Washington Post columnist Jennifer Rubin thinks that there should be consequences for the 126 Republican House members who gave their name in support of the Supreme Court case from Texas Attorney General Ken Paxton (R).

Speaking to MSNBC's María Teresa Kumar on Sunday, Rubin said that several things are necessary to stop election lies from flooding from the conspiracy world to the mainstream.

"It very much matters what the media says and what the political class says," Rubin explained. "It matters that when you have guests on who have signed this brief that you introduce them as individuals who sought to overturn the last election. They should be labeled as people who betrayed democracy. That's first of all. Second, when Nancy Pelosi swears in the new House in January, she should make a big deal about this. She should remind these people what the oath of office is. Encourage them to renounce their prior action and rhetoric. And it's incumbent upon the new president, once he's in office, to urge Republicans to stop this non-sense and explain to the American people he is the legitimate president and if they want to get anything done and maintain, frankly, whatever shred of credibility they have it's time to start behaving like grown-ups in a democracy. There's a lot of people who have a role to play. We have already seen some election officials really step up to the plate, and we need the rest to step up as well."

When elected officials take the oath of office to "support and defend the Constitution of the United States against all enemies, foreign and domestic; that I will bear true faith and allegiance to the same..."

Paxton's lawsuit was in direct conflict with the Tenth Amendment of the U.S. Constitution. A group of conservative lawmakers and legal scholars attacked the suit for that reason, calling it "a mockery of federalism and separation of powers."

When an official violates their oath of office, Walker v. Members of Congress said that "penalties for violation of oath office described in 5 U.S.C. 7311 which include: (1) removal from office and; (2) confinement or a fine. The definition of “advocate” is further specified in Executive Order 10450 which for the purposes of enforcement supplements 5 U.S.C."

Even if officials tried to claim that their actions were purely political in nature, the document clearly states that they were signing it as Representatives of the U.S. Congress and not as individual citizens, citing their titles and districts in the states in which they hold office. At the same time, these officials don't have a political stake in the presidential election as it isn't the office they hold or ran for.

NEW: Another 20 House Republicans sign onto an amicus brief supporting the Texas lawsuit that seeks to overturn the… https://t.co/KIGhqjZkXw
— Andrew Solender (@Andrew Solender) 1607712763.0

There's also a provision in Executive Order 10450 that calls it a violation of 5 U.S.C. 7311 for any person taking the oath of office to advocate “the alteration ... of the form of the government of the United States by unconstitutional means.” Overthrowing the democratic-republican outlined in the U.S. Constitution in a lawsuit by some states angry at others does not appear to be outlined as a legal way to "aliterate...the form of government of the United States..."

Rubin called the behavior from the GOP unprecedented and shamed Republicans who should know better.

"We have never had anything the history of the republic other than Civil War itself," said Rubin. "126 members of the Congress including the people at the highest level of leadership including Kevin McCarthy sign on a brief to the United States Supreme Court that essentially said some states, Trump states, want to throw out the votes of voters in Joe Biden states. Unprecedented. It's a coup. He's trying to undo the election."

"It's not simply that they are pretending it's not going on," Rubin said about the transition. "They are now adding credibility. Adding weight to [Trump] with these constant -- 'Well, you have to let the process play itself out.' As if there were any doubt whatsoever about the results. It's very disconcerting, and you should have that many members of the House, that you should have 18 state attorneys general, all Republicans, of course. That you should have many other Republican senators eager to take on this fight and participating in efforts to interfere and sway election officials, as you saw with Lindsey Graham. So, it's not just a horrible problem with the president of the United States. It's that an entire party seems to have given up on democracy."