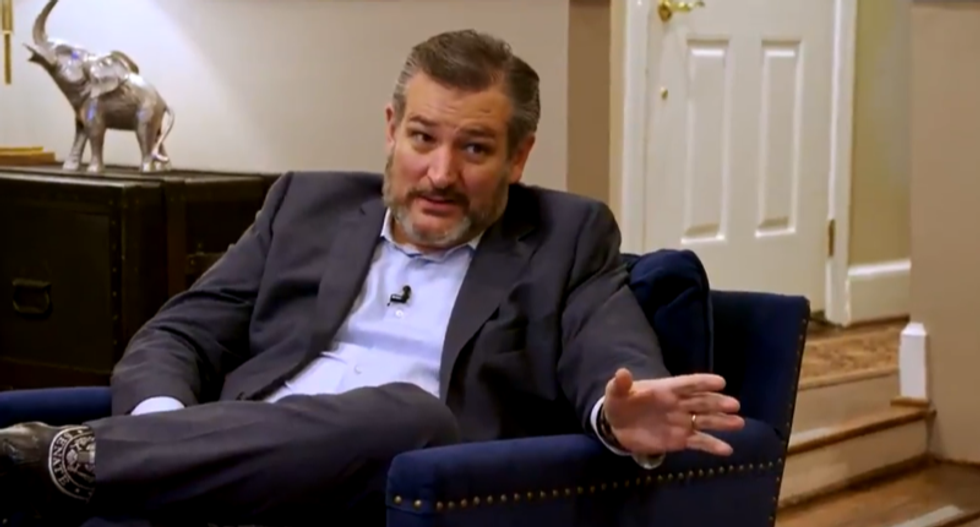 In a column in the Daily Beast. conservative columnist Matt Lewis lambasted Sen. Ted Cruz (R-TX) -- along with a few other GOP lawmakers past and present -- for aligning themselves with conspiracy-minded folks alleging massive voter fraud only to do an about-face over fears of losing two seats in the Senate held by Georgia Republicans.

According to Lewis, Cruz as well as Rep. Dan Crenshaw (R-TX) deserve no credit for suddenly seeing the light because they cynically embraced the far-right wing to elevate their own profiles.

With Lewis writing of the Georgia run-off and Donald Trump's Saturday night rally, "Control of the Senate hangs in the balance," he added that "... unless Trump delivers disciplined remarks and a full-throated endorsement (don’t hold your breath), the civil war between Trump supporters who want to hold the Senate and MAGA cult members who want to hold a coup will likely accelerate."

That, he states, has Republicans worried -- including Cruz who risks being part of a Democratic-controlled Senate for the next two years.

"If you haven’t picked up on this already, this is not one of those columns that congratulates Trump’s erstwhile enablers for finally drawing a line in the sand and coming to their senses," Lewis warned. "On the contrary, they were willing to back Trump when he pushed a bogus 'emergency' order, when he tried to coerce Ukraine to dig up dirt on Joe Biden, and when he tried to steal the presidential election in 2020. But hurting Republican chances in Georgia? Now that’s a bridge too far!"

Then he dropped the hammer on Trump's enablers.

"This whole episode has exposed which Republicans are merely cynical enablers and which ones are true believers," he wrote. "But there are no heroes. Newt [Gingrich] is a cynic. Cruz is a cynic. Dan Crenshaw is a cynic. They have been playing a dangerous game of chicken that very well could have resulted in a head-on collision. They barrelled ahead, so long as the stakes were low (just our faith in democratic institutions and our social fabric), and they only swerved when partisan political concerns (control of the U.S. Senate) were jeopardized."

"For years, conservatives like Cruz warned establishment Republicans that you can’t outbid or outspend Democrats, so playing that game was a sure loser. Well, it’s time that people like Cruz learn you can’t out-crazy people who are legitimately insane," Lewis lectured before adding that Republicans have created a "monster" by standing by while the QAnon people moved to the forefront with Trump's help.

"They learned this lesson too late. You can’t humor or appease the crazies, in hopes that you will inherit their supporters and reap the benefits. Instead, you reap what you sow," he bluntly stated.