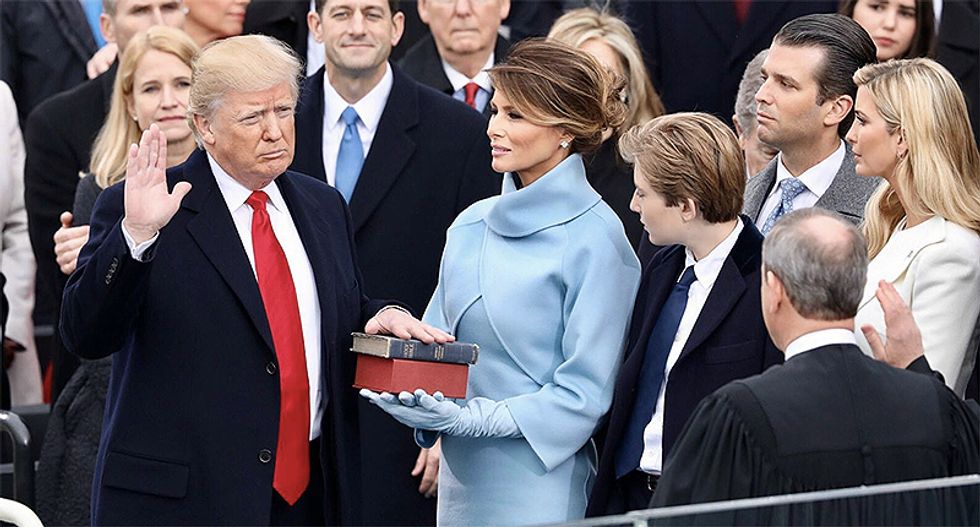 Donald Trump being sworn in as the 45th president of the United States on Jan. 20, 2017 (via Wikimedia Commons).

Congress typically allocates funds to the city of Washington, D.C. to handle the security and other operations needed for swearing in a new president. Typically that includes the crowds on the National Mall, a city-wide parade and other events. D.C. is asking Congress for the cash to do it because they've exhausted all of their emergency funds.

Despite the small crowd, President Donald Trump's swearing-in cost $7 million more than neither Trump nor Congress paid in 2017, the Washington Post reported Tuesday. The city used the funds in their emergency fund to ensure everything was covered, perhaps assuming Congress would repay them. Still, Congress let the bills go unpaid.

"That funding hole has only grown over the past four years as the city routinely spent more money than Congress had appropriated to manage national events and demonstrations," the report explained.

Trump has been notorious for not paying his campaign bills. Despite raising millions after the election, Trump still owes over $2 million in unpaid security bills to cities across the country in New Mexico, Michigan, Arizona, Wisconsin, Pennsylvania and more.

“I fully expect them to stiff Greensburg and Westmoreland County taxpayers with the bill for this rally,” said Pennsylvania state Rep. Austin Davis about a rally in his city.

According to the Business Insider, "Trump’s excuse is that his campaign isn’t legally required to pay," because he said the Secret Service is obligated to pay. For campaign rallies, however, the campaign is on the hook but the president is still refusing to pay. No municipality has attempted to collect nor has anyone taken the campaign to court demanding payment.

“We do not need a two-hour visit and a photo-op from Vice President Pence. We need a plan to get this country and this county back on track. We need them to do their jobs," said Tara Yokopenic, Westmoreland County Democratic Committee chairwoman when Vice President Mike Pence showed up after a police shooting in their city.

In Washington, Mayor Muriel Bowser sent President-elect Joe Biden a letter explaining that “the use of local revenue to cover expenses related to protecting the federal presence severely limits our ability to fund necessary support for our residents and businesses as we face what are anticipated to be dire winter months.”