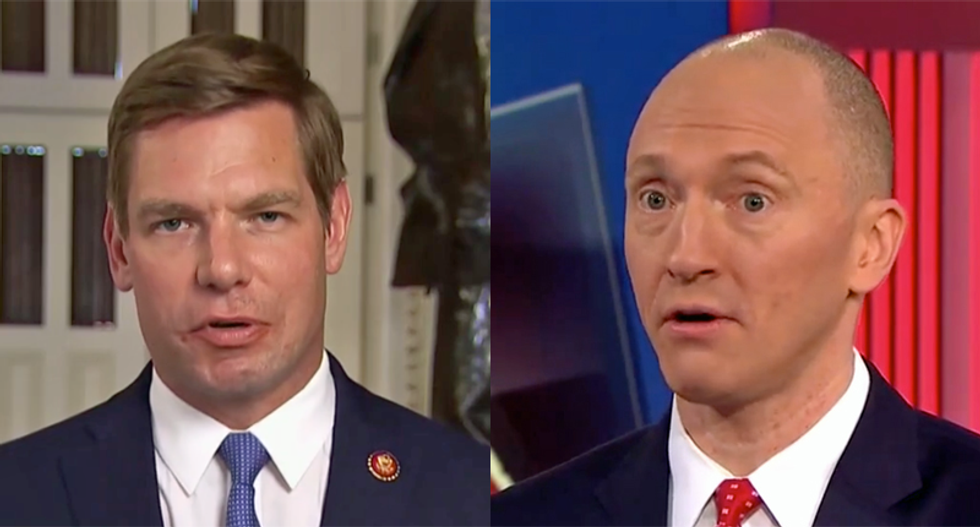 Conservatives took off after Rep. Eric Swalwell (D-CA) when it was learned Thursday that six years ago a Chinese spy attempted to use him as part of a possible operation in the United States. Former FBI special agent Asha Rangappa explained that Swalwell certainly isn't the first and he won't be the last. The real measure of the issue is what someone does when the FBI approaches them to reveal there is a concern.

In the case of Swalwell, in 2012, Chinese nationalist Christine Fang approached Swalwell. It's been six years since the FBI approached Swalwell to tell him that Fang was suspected of being a spy. In his case, the Congressman cut off ties immediately and provided information about Fang to the FBI. President Donald Trump was elected the following year and his FBI never attempted to investigate Swalwell or raise public concerns.

That's not what happened with Page and Erickson.

"Just to emphasize, Carter Page was warned that he was being targeted by Russian intelligence," Rangappa tweeted. "So was the Trump campaign. And Senator Ron Johnson. NONE of them cut off contact...they doubled down (and in the case of the Trump campaign, later concealed and lied about it to the FBI)."

She explained that foreign intelligence agents approach people in power all the time. President Donald Trump was the target of a Chinese spying attempt at Mar-a-Lago last year. She wasn't the first. From Sept. 2018 to April 2019 six people, two Chinese women and four Chinese men were arrested for trespassing to take photos at Naval Air Station Key West, NBC News reported.

President Donald Trump's 2016 campaign was warned about Russians trying to infiltrate his campaign by the FBI in July of that year.

Trump would have been told, "If you see these kinds of contacts please let us know about them so we can keep you updated on the threat picture," NBC News quoted former FBI counterintelligence agent Frank Montoya. The Trump campaign also chose a different route when receiving those warnings than Swalwell did.

"The FBI typically gives a defensive briefing/warning when they believe you are being UNWITTINGLY targeted," explained Rangappa. "If they think you are knowingly participating, they will quietly monitor you to gather more info (and in some cases open a criminal investigation). Targets of foreign intelligence can include: scientists and researchers, politicians, businessmen, journalists, diplomats. Being approached means you have access to info they want. (HPSCI: shocker!) Again, what matters is how you respond once the FBI alerts you to the threat."