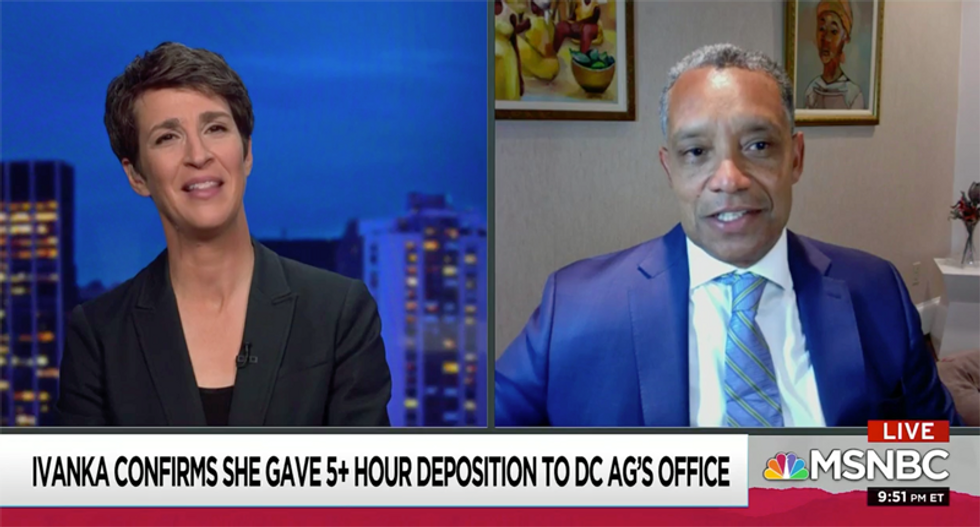 Rachel Maddow and Attorney General of the District of Columbia Karl Racine on MSNBC (screengrab).

The attorney general for Washington, DC on Thursday harshly criticized the defense offered by first daughter Ivanka Trump after it was revealed she was deposed in a lawsuit over the misuse of non-profit funds by Trump's 2017 inauguration committee.

"There's a long list of people and entities who have been subpoenaed for documents as part of your investigation," Maddow noted. "Have you been able to talk to everybody you'd like to talk to?"

"Yeah," Racine replied. "Our prosecution of this civil case has been thorough and, indeed, we've received numerous documents. We think that the productions to date have been complete."

"I want to emphasize a couple of points, and I think that with all due respect to Ivanka Trump, what she put out today was highly misleading and at best only a part of the story. For example, Rachel, she makes a lot of an email wherein she claims that she directed the foundation to pay market rate for the Trump Hotel. That email was dated December 14th. Days after that email, there was clearly an attempt to pay a lot more than the market price. Stephanie Winston Wokoff sent emails -- including to Ivanka Trump -- raising alarms about the prices that the Trump Hotel was seeking to charge the inauguration committee," he explained.

"Interestingly, Ms. Trump does not cite any email after Ms. Wolcoff's red-alarm email saying, 'oh my goodness, this should not be charged at these high levels.' And, in fact, as we know, the foundation was charged at extraordinarily high levels," Racine explained.

A driver was shot during an apparent road rage incident in Cherokee County, Georgia, this Thursday, and the incident was caught on video.

According to Fox5, a police officer witnessed the incident and carried out a traffic stop on the shooter. Cherokee County Sheriff's deputies later found a driver who appeared to be shot twice who they rushed to the hospital. The driver is expected to survive.

The UN's cultural agency on Friday inscribed the culture surrounding beetroot soup known as borscht in Ukraine on its list of endangered cultural heritage, a recognition sought urgently by Kviv after its invasion by neighboring Russia.

Ukraine prizes borscht , a nourishing soup with beetroot as its base, as a national dish even though it is also widely enjoyed in Russia, other ex-Soviet countries and Poland.

CHICAGO — Two men were killed and three more wounded when a gunman opened fire in Chicago’s Loop early Friday morning, police said. The group of five men had left a downtown business and were in an argument with the unknown gunman when he pulled out a handgun and began firing shots, the Chicago Police Department wrote. Police reported that the incident occurred at 1:44 a.m. A 29-year-old man was pronounced dead at Stroger Hospital with gunshot wounds to the left side of his head, and a 26-year-old man was pronounced dead there with wounds to the chest. The three other victims — a 29-year-old m...