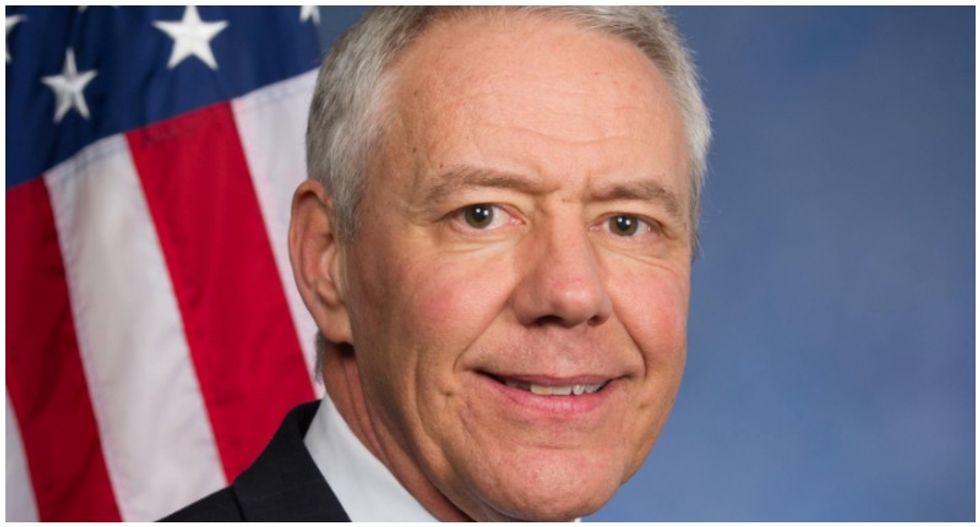 Meet U.S. Congressman Ken Buck, a Republican of Colorado. Buck on Thursday called for President-elect Joe Biden to be prosecuted for supposed crimes after he leaves office.

Biden is not under investigation nor is there any proof he has committed any crimes, but that didn't stop Buck from making the accusation on live national television.

"The American people are fed up with corruption in Washington, D.C.," Buck told Fox News. "I think they're fed up with people selling their office for personal gain, and thats exactly what it appears President-elect Biden did."

Again, there is zero proof to support that charge.

"If he didn't do it, we need to have a special counsel to clear the air," he added, echoing reports that President Donald Trump wants to install one before he leaves office.

Buck, who has a long and disturbing history of ethical and legal missteps, went on to claim, falsely, that Special Counsel Robert Mueller "cleared" President Trump.

"If President-elect Biden is cleared, so be it. If he's not cleared, we need to proceed with criminal charges against Hunter Biden, and if necessary against Joe Biden when he leaves office."

Earlier this week Buck spun a false tale on Fox News radio, concluding, "I think that Joe Biden is going to be subject to blackmail if we don't get to the bottom of this. And so if he does become president, I think it's very important that we have an independent counsel looking into this."

Again, zero evidence of any criminal or even unethical conduct by President-elect Joe Biden.

But there is plenty of evidence of inappropriate, questionable, and disturbing behavior from Ken Buck.

Congressman Buck, who for reasons unknown is also the head of the Colorado Republican Party, was one of 126 Republican members of Congress who signed on to the Texas lawsuit asking the U.S. Supreme Court to disenfranchise voters in four states that went for Joe Biden. The frivolous lawsuit did not call for the votes in states that went to Donald Trump to be voided.

Buck may not have much of a national profile but local Colorado newspapers have found plenty about him to report.

In May The Denver Post reported Rep. Buck "pressured a local party official to submit incorrect election results to set the primary ballot for a state Senate seat."

That party official, a local GOP chairman, blasted Buck's actions, saying he tried to force him to commit a crime: “To say it’s damning is an understatement.”

“You’ve got a sitting congressman, a sitting state party chair," he said, referring to Buck, "who is trying to bully a volunteer — I’m a volunteer; I don’t get paid for this — into committing a crime,” Eli Bremer told The Post.

Also in May The Denver Post reported that the "Weld County GOP chairman has filed a complaint with the local district attorney and the Secretary of State’s Office accusing an aide to Republican U.S. Rep. Ken Buck and three others of election fraud and corruption."

"It’s the second accusation of election irregularities to touch Buck," the Post noted.

Meanwhile, in other instances of disturbing behavior, back in the 1990's, Buck was the Chief of the Criminal Division in the U.S. Attorney's Office for Colorado. He was forced to take an ethics class after holding a meeting with defense attorneys.

The U.S. Attorney "called Buck’s conversations with defense attorneys a 'reckless disregard of your obligation to keep client information confidential,' according to his letter of reprimand," The Denver Post reported.

That case involved "a pair of Russian immigrant brothers who ran a gun store and pawnshop," who were "contributors to the Republican Party." Buck declined to prosecute the case, despite the FBI believing the store was "an easy place to pick up cheap handguns — commonly known as Saturday night specials."

In the early 2000's, as the District Attorney for Weld County, Buck was sued by the ACLU after he raided a tax service and took files of 5000 customers. The Colorado Supreme Court ruled his actions were unconstitutional, costing the county $150,000, as The Denver Post reported.

“The fact that his own agenda was more important than his community or the costs to the community shows a lot about his character,” said Rhonda Solis, a Greeley community activist. “He was wrong, and he didn’t like it.”

And in 2006 Buck refused to prosecute a rape case even though "the suspect virtually confessed, according to a police transcript ... of a phone call between the victim and suspect," according to a report in The Colorado Independent.