Nicolle Wallace shouts about Trump: ‘He’s a grifter taking your money! Stealing from his supporters!’ 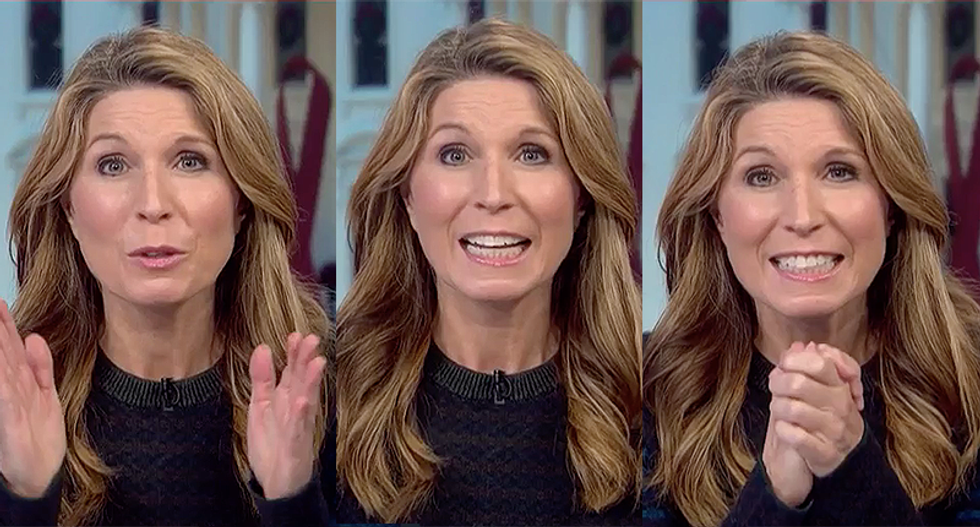 Nicolle Wallace pleads with people to stop handing over all their money to Trump's grift machine (Photos: Screen captures)

"Donald Trump's huge and ever so frail ego is a part of why he hasn't conceded the election he lost to Joe Biden nearly a month ago," Wallace said at the top of the segment. "Starting to look like his bank account might also be a factor. New York Times reports today that Trump's campaign has raised about $170 million since election day through a dizzying spell of emails claiming election fraud and asking supporters for cash. The catch, 75 percent of each donation goes toward a PAC that can be used to fund Donald Trump's post-election activities."

Speaking to Donny Deutsch, Wallace asked why his supporters are still giving him money.

"There is no reason to send your money to Donald Trump," she said. "Even if you like him. Don't give him your money. Give it to the food bank. He doesn't need your money. Please, why are they still giving him their money?"

Deutsch concluded "a lot of people are idiots," and that's the reason they're giving.

"I mean, I don't know how to put it any other way," he confessed. "You know, he sent out more emails in the week after the election than the week before the election. What else does that tell you? Look, Donald Trump is a huckster. He's got about $1.1 billion in debt coming due in the next two years. $900 million of that is tied up in the Vornado Company, and he's not liquid. Donald Trump, can have a net worth of $2 billion or a billion and a half dollars, but there's no liquidity there and he needs money."

Wallace cut in to shout, "Donnie, you're talking rich people talk! Let me just put it -- he's a grifter who is taking your money to pay defense lawyers!"

"I mean, forget about his business debt, he's stealing from his supporters," Wallace also said.

Deutsch also recalled that Trump was the kind of person who also stole from his own charity and lied to the public when he said he was donating to veterans groups during the 2016 election. It was only after a report outing him that he finally wrote a check to the groups he pledged.

"And by the way, the New York state attorney general is going to have more to say about that," noted Deutsch. "He stole from his charity. He loathes the people that voted for him. He, in effect, grifted them with the tax cut. His voters, that middle of America, that red state, more red meat stuff, they got screwed over in the tax plan. Guys like me benefited from that tax plan. So, you know, he will screw anybody and anything, like, I don't know what other than to say, yes, yes, yes, yes, yes. People are stupid, okay?"