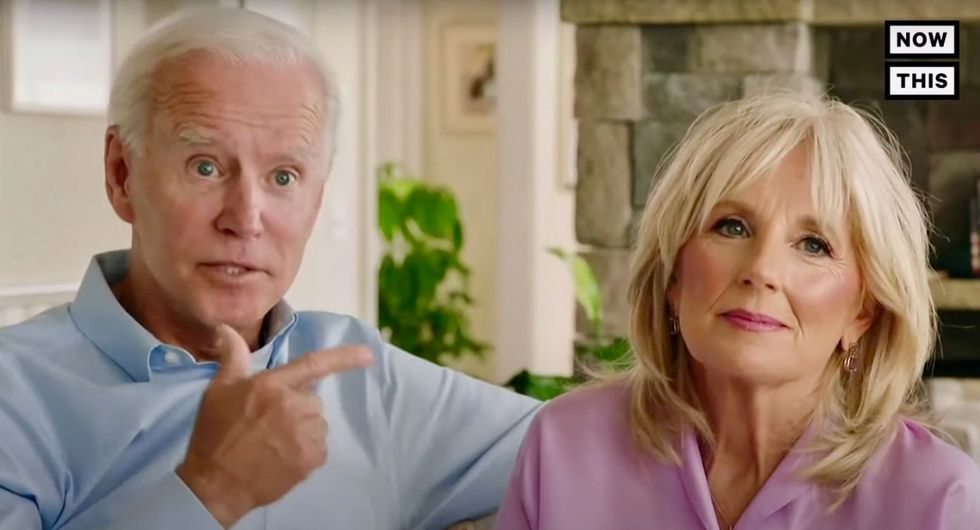 Washington Post style writer Monica Hesse came to the defense of incoming first lady Dr. Jill Biden in a Sunday column. Saturday, a Wall Street Journal editorial attacked the college professor because using her Ed.D. title in her name because they think it "feels fraudulent."

"Madame First Lady—Mrs. Biden—Jill—kiddo: a bit of advice on what may seem like a small but I think is a not unimportant matter," the Journal piece goes. "Any chance you might drop the 'Dr.' before your name? 'Dr. Jill Biden' sounds and feels fraudulent, not to say a touch comic. Your degree is, I believe, an Ed.D., a doctor of education, earned at the University of Delaware through a dissertation with the unpromising title' Student Retention at the Community College Level: Meeting Students' Needs.' A wise man once said that no one should call himself 'Dr.' unless he has delivered a child. Think about it, Dr. Jill, and forthwith drop the doc."

Eleanor Roosevelt was heavily attacked after resigning from the Daughters of the American Revolution because they refused to allow an African-American woman to perform in Constitution Hall. Andrew Jackson's wife Rachel was blasted for being a bigamist and an adulterer, because she hated her first husband and was miserable. As a woman, she was not allowed to file for a divorce, but her then-husband accused her of flirting with someone and kicked her out. That's when she started dating Jackson.

When Michelle Obama came into office, she was criticized for wearing sleeveless dresses; something first ladies did decades before her. One Virginia voter said she didn't "look" like a first lady. Rush Limbaugh and Fox News "Medical A-Team" member Keith Ablow said she was fat. Ultimately, Alex Jones decided she was a man. First lady Melania Trump similarly was criticized by many for being the first first lady to pose nude. Then there was Hillary Clinton, who endured such a ridiculous degree of attacks that they continued to follow her to this day.

Hesse recalled an episode of the infamous political show "The West Wing," written by Aaron Sorkin, in which first lady Abbey Bartlet corrected the White House counsel when he called her "Mrs. Bartlet" instead of Dr. Bartlet. In that case, Dr. B graduated from Harvard Medical school and specialized in internal medicine and thoracic surgery. In contemporary times, Dr. B graduated from her master's just months before giving birth to the Biden's daughter Ashley.

But the columnist at the Journal would prefer to call the first lady "Kiddo."

"Jill Biden is not a medical doctor," Hesse continued in her column. "In her 50s, she acquired an EdD from the University of Delaware; she now works as a community college professor, and plans to continue through her husband's presidential term."

"For Biden to use the title of 'Dr.' is highfalutin and misleading, Joseph Epstein wrote, as 'no one should call himself Dr. unless he has delivered a child,'" she quoted. Indeed, Dr. Biden has delivered a child, Ashley Biden was born in June 1981. Comedian Seth Meyers also "delivered" his son in the lobby of his building in New York by these same standards.

Many others came to Dr. Biden's defense, including MSNBC host Alecia Menendez, who cited Merriam-Webster's definition of a "doctor" as "a learned or authoritative teacher, or a person who has earned one of the highest academic degrees such as a Ed.D.." In the words of Menendez, "Dr. Biden has achieved both."

Meanwhile, Joseph Epstein was rebuked by a slate of people on the left and right in both genders as well as his former school, Northwestern University.

It's reminiscent of another Aaron Sorkin script, in which a president tells his opponent, "You want a character debate, you better stick with me because" she's "way out of your league."

Biden's accomplishments are her own, and like many first ladies before her, they have nothing to do with her husband. She achieved her Ph.D. after returning to school at the age of 50. She, like many first ladies before her, will use her public position to aid in the accomplishments of the administration, but she'll be a first lady that shows women everywhere that their education dreams are possible, no matter the age. As a former teacher to emotionally disabled kids, she'll show youth that they all deserve an education, regardless of their challenges. As an existing teacher, she'll also be an advocate for educators who have worked without funds or necessary supplies for the past four years.

"As of Sunday morning, Biden had not directly responded to the column," Hesse noted. Why would she? "And to the future first lady: Whatever happens, for pity's sake, don't listen to this weird, grumpy, elitist man. Don't ever sit in the White House and wonder what happened to your old sense of self. Be Dr. Biden. Be Dr. Biden forever."