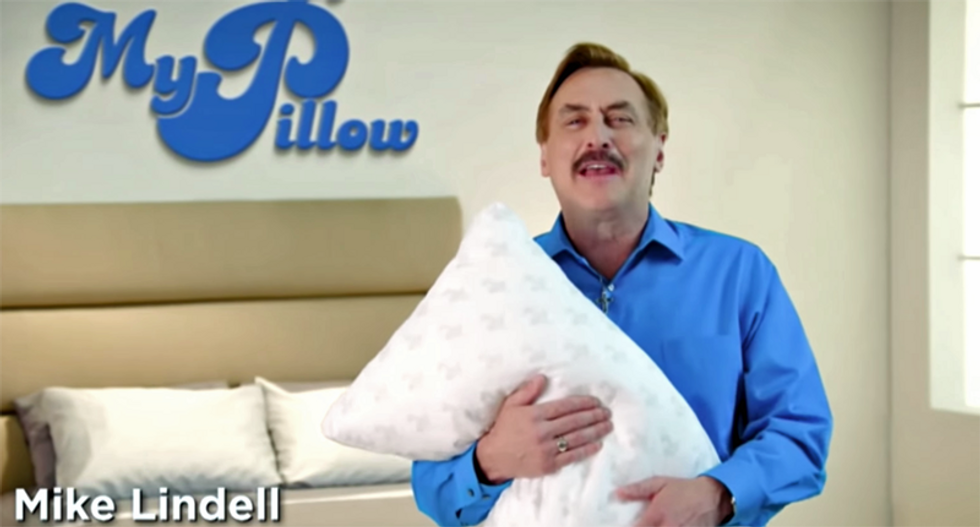 It’s official: Mike Lindell is a few feathers short of a full pillow.

Not so long ago, Lindell was known just as the creepy guy trying to get you buy his “My Pillow” in those uncomfortable late-night commercials. No more. Lindell now is a full-fledged Unreality TV star, having pretty much left Earth’s orbit exploring some new wingnut dimension of Trump.

At a Washington D.C. rally Saturday billed as the “Million MAGA March” -- it brought out thousands -- Lindell unraveled one bizarre claim after another that was only news because he delivered it on a microphone and not in front of a bus station. People holding “End Times” signs were rolling their eyes.

"Why do you think Fox declared Arizona with only 14 percent of the vote in?" Lindell told the rally crowd, as gleefully reported at Newsmax. "They already knew what they did. They were in on it. I'm serious. They had to be in on it."

If that’s serious, one would hate to experience unserious. But Newsmax liked the theory anyway, adding, “Newsmax TV has been the beneficiary of viewer anger at Fox. Newsmax’s ratings have skyrocketed, and its hit show ‘Greg Kelly Reports,’ just beat Fox in the key demo, according to Nielsen.”

Now back to your regular deprogramming. That was just the tip of Lindell’s iceberg. Here’s some more from his speech:

“Last night I talked to (Kraken-slayer attorney) Sydney Powell and she put right now it’s in the Supreme Court -- Wisconsin, Michigan, Arizona and Georgia -- and that’s the real lawsuits. That the stuff Texas had was not the one that we were all working on.”

If you’re wondering about my spell-check, that’s a faithful transcription by me of Pillow Guy’s actual speech, such that it was. Cleaning up the syntax would be like blacking out private parts in an adult film: you just lose the full picture.

“I’m going to tell you what really happened the night of the election, OK, what they’re not telling you, what they are hiding…on election night at 11:15, all the algorithms that were set across our country, in the machines where Biden got like 1.2 votes for every vote and our president got like .66, when that happened all of us voted -- it was probably 80 million votes came in for our great president -- and because of you, guess what, they all broke the algorithms in the machines so there wasn’t enough time in Wisconsin, almost all the votes were in, so they had to stop the election because he would have won the election because of the fraud.”

It goes on, but you get the point. And so did the MAGA crowd, which cheered Lindell’s disconnected words. There was much more, with Lindell calling for Fox employees to be sent to prison and claims about Fox that “they were going for everything. They were going to take everything we had.”

As preferable as it would seem to dismiss these rantings as merely the waste product of rally organizers having provided Lindell a microphone, the reality is that his words matter to millions of Trump followers. This is a guy, as reported at Raw Story, who is being promoted by Trump as the next governor of Minnesota.

Some of Lindell’s other words Saturday, cleaned up a bit at the right-wing website NTD.com, pretty well speak for themselves:

“Lindell told the crowd of how he met Donald Trump before he became president and became a supporter of Trump’s because of the man’s strength of character and faith in God. But the same reason Trump won Lindell’s support resulted in the media smearing his name and character, he told the crowd.

“We can never back down in fear, we only have one fear and that’s fear of the Lord,” Lindell said. “I will tell you, the attacks I had this summer and the attacks the president had from this pandemic … they’re trying to take away Christmas, they tried to take away Thanksgiving. And they tried to steal this election.

“Lindell says that though there was fraud, there is also a blessing from God.

“Because he got so many votes that they had to backfill, now we all know it was fraud,” he said. “Now it’s all going to be exposed. The whole world is watching. Now in the future, we’re going to have the fairest elections in history. Starting, I want Georgia to listen, Georgia you better have a fair election.”

"The whole world is watching,” he said. “We are in, because of this exposed fraud, the opportunity of a lifetime. We are living in the most blessed time in history because we are going to be the ones to expose this. This has been a spiritual battle in our country for decades.”

“This is the start of the greatest revival in history for one nation under God.”