‘These are reasonable people!’ GOP's Josh Hawley insists voter fraud claims are true because his constituents ‘believe’ them 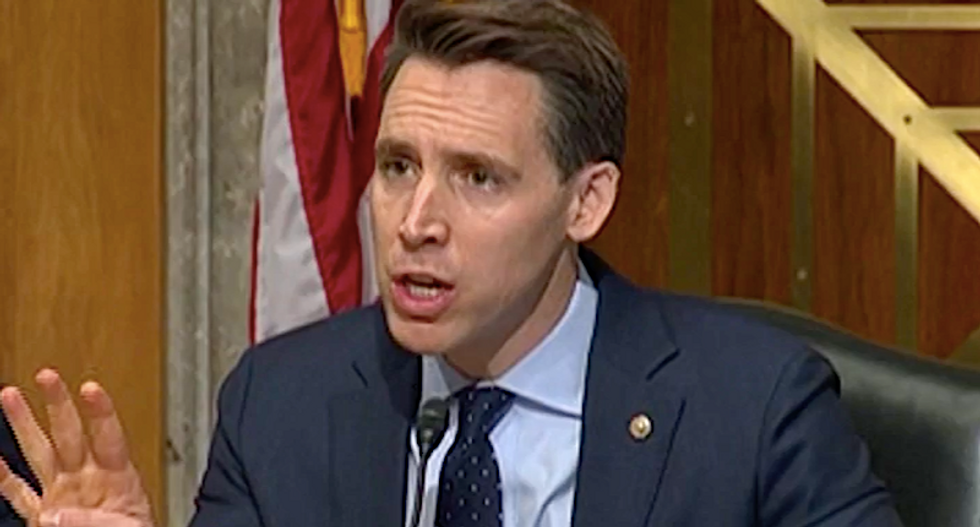 Sen. Josh Hawley (R-MO) insisted the presidential election must have been rigged because a couple dozen of his constituents believed it had been.

A former cybersecurity official fired by President Donald Trump testified Wednesday before the Senate Homeland Security and Governmental Affairs Committee, where he pushed back against Republican claims from senators such as Hawley -- who offered only anecdotal evidence of election fraud.

"I'm from the state of Missouri," Hawley said. "Yesterday I was talking with some of the constituents back home, a group of about 30 people. Every single one of them, every one of them told me that they felt they had been disenfranchised, that their votes didn't matter, that the election had been rigged. These are normal, reasonable people. these are not crazy people, these are reasonable people that, by the way, have been involved in politics, that have won, they've lost, they've seen it all."

"They are normal folks living normal lives who firmly believe that they have been disenfranchised," he continued, "and to listen to the mainstream press and quite a few voices in this building to tell them after four years of nonstop Russia 'hoax,' it was a hoax. The whole Russia nonsense was based on, we now know, lies from a Russian spy, the Steele dossier was based on a Russian spy. After four years of that, being told that the last election was fake and that Donald Trump wasn't really elected and that Russia intervened, now these same people are being told, you need to sit down and shut up. if you have concerns about cybersecurity, you're a nutcase, you should shut up."

"Well, I'll tell you what, 74 million Americans are not going to shut up," Hawley added, "and telling them that their views don't matter, their concerns do not matter, and that they should just be quiet, is not a recipe for success in this country. It's not a recipe for the unity that I hear now the other side is so interested in."