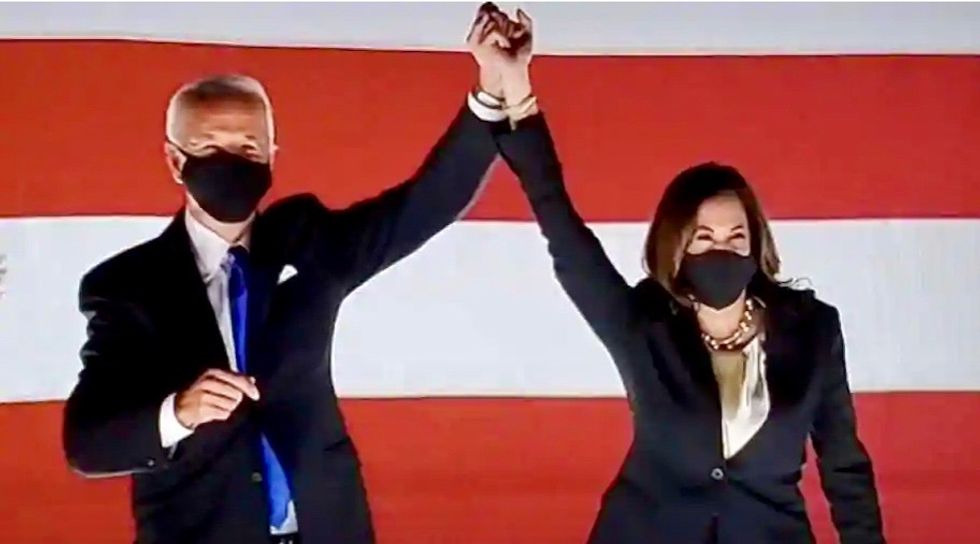 Joe Biden's US election victory was set for formal confirmation Monday by the Electoral College, further closing the door on angry efforts by President Donald Trump to overturn the 2020 vote.

Electors were meeting across all 50 states, often under extra security amid tensions driven by Trump's unprecedented refusal to concede.

About halfway through the process, due to finish late Monday, Biden was on course to rack up an expected 306 Electoral College votes against 232 for Trump. As soon as he crosses the half-way mark, hitting 270, his win will already be secured.

"I hope you can see me smiling behind this mask," said Democrat Nancy Patton Mills, as she presided over the vote, held with full Covid-19 precautions, in Pennsylvania.

"I believe we should abolish the Electoral College," Clinton tweeted. "But while it still exists, I was proud to cast my vote in New York for Joe Biden and Kamala Harris.

The Electoral College is a tradition that has long been considered mostly a formality for confirming the will of the people expressed at the polls.

This year, the somewhat arcane procedure is at the center of an ugly -- and many warn dangerous -- challenge led by Trump against the credibility of US democracy.

Soundly beaten by Biden on November 3, Trump continues to claim, without evidence, that he was the real winner.

Court after court has turned down the Republican team's claims of election fraud around the country and last Friday the Supreme Court dealt a final legal blow when it threw out an appeal lodged by Trump allies from Texas and other Republican-led states.

Yet another challenge, seeking to get Biden's narrow win in Wisconsin tossed out, was rejected Monday by the state's top court.

Formal confirmation in the Electoral College will draw a further line under the election, which saw Biden make Trump a rare one-term president after campaigning on a message of vanquishing the Covid-19 pandemic, healing political division and restoring traditional US diplomacy.

The Democrat, who has largely avoided responding to Trump's conspiracy theories, announced he would deliver an address in the evening dedicated to "the strength and resilience" of US democracy.

Until now, a majority of Republicans in Congress have either backed Trump's claims or at least turned a blind eye, with many refusing to call Biden the president-elect.

Disinformation spearheaded by the president and spread by popular commentators on Fox News and new conspiracy theory-mongering outlets like Newsmax means that many Americans have all but given up faith in their own institutions.

Polls show that as few as one in four Republican voters accept the election results.

Thousands of Trump supporters, including members of far-right groups, protested in Washington at the weekend, brawling with counter-protesters.

The threat of violence led to extraordinary security measures for the Electoral College meetings in several states.

Michigan Governor Gretchen Whitmer -- herself the target this year of death threats and a paramilitary kidnapping plot -- ordered the vote to take place in a closed building due to "security issues." Footage in Georgia over the weekend showed a group of armed activists in camouflage parading at the state Capitol to support Trump's claims.

Stephen Miller, a senior Trump advisor, told Fox News on Monday that an "alternate slate of electors" had been created to send its own results to Congress, with Biden declared the loser.

And Trump maintained his stream of threats and unsubstantiated claims on Twitter, citing "massive VOTER FRAUD" and declaring that certifying election results would be "a severely punishable crime."

The legal Electoral College vote, however, will leave the Trump train almost no place left to go.

Only one big formality remains before Biden's inauguration on January 20, when Congress, presided over by Vice President Mike Pence, opens up and counts the electoral votes on January 6.

Pennsylvania's state attorney general Josh Shapiro, who is also an elector, called Monday's procedure an "exclamation point, clearly demonstrating -- yet again -- that Joe Biden will be the next president of the United States."

In the latest sign of a shifting tide, the staunchly Trump-supporting editorial board of The Wall Street Journal told Trump Monday that his time is up.

"President Trump's legal challenges have run their course, and he and the rest of the Republican Party can help the country and themselves by acknowledging the result and moving on," it said.