WSJ is acting like a 'gutter internet publication' in effort to smear Dr. Jill Biden and prop up Trump: Morning Joe 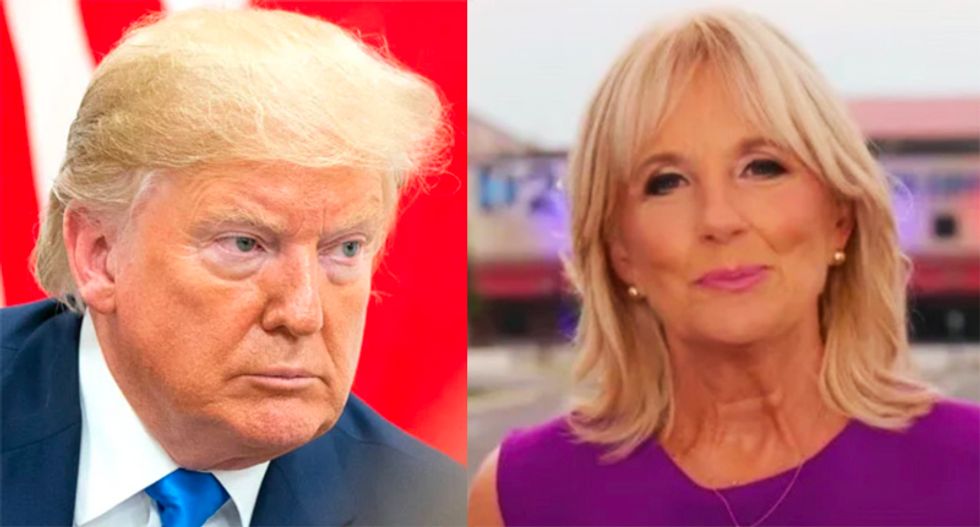 On Monday morning, the entire panel of MSNBC's "Morning Joe" piled on the Wall Street Journal for a controversial column the conservative paper ran over the weekend that attempted to diminish the accomplishments of incoming first lady Dr. Jill Biden -- after four years of the Journal propping up Donald Trump who is leaving office with little positive to show for the past four years.

Co-hosts Joe Scarborough and Mika Brzezinski -- as well as MSNBC regulars Rev. Al Sharpton and Kasie Hunt -- scorched the paper for deigning to even run the column that began, "Madame First Lady—Mrs. Biden—Jill—kiddo: a bit of advice on what may seem like a small but I think is a not unimportant matter. Any chance you might drop the 'Dr.' before your name? 'Dr. Jill Biden' sounds and feels fraudulent, not to say a touch comic."

After an obviously disgusted Brzezinski read excerpts from the column by Joseph Epstein -- asking the paper's editors: "What were you thinking?" -- co-host Scarborough held up a piece written by editorial page editor Paul Gigot that made excuses for Donald Trump's four years in office.

"Let's see. Oh, how about this one: did anybody accuse you of murder?" the host said in reference to allegations by the president that Scarborough was behind the death of an aide when he was still in Congress. "Anybody accuse you of murder because that's actually what Donald Trump did with me 11 times. You know anybody in your life, Paul, who died? Anybody ever worked for you who died? Because Donald Trump actually is still terrorizing the family of a woman who worked for me 20 years later and slandering her name. I'm just curious, did that happen to you, Paul, this weekend? Because if not, you should probably keep your mouth shut. "

With panelist Hunt comparing the treatment of Dr. Jill Biden by the paper with the delicate treatment of Melania Trump, Scarborough jumped back into the fray by lambasting the Journal.

"What happened with your stupid little article? Just like Trump, it's a joke. It's not even close, you've got a long way to go. If you're going to ride this broken down pony into town, it's going to be a long four years for you. There's no comparison and you know it, so stop lying to your readers, stop acting like your readers are that stupid," he exclaimed before saying the Journal was acting like a "gutter internet publication."