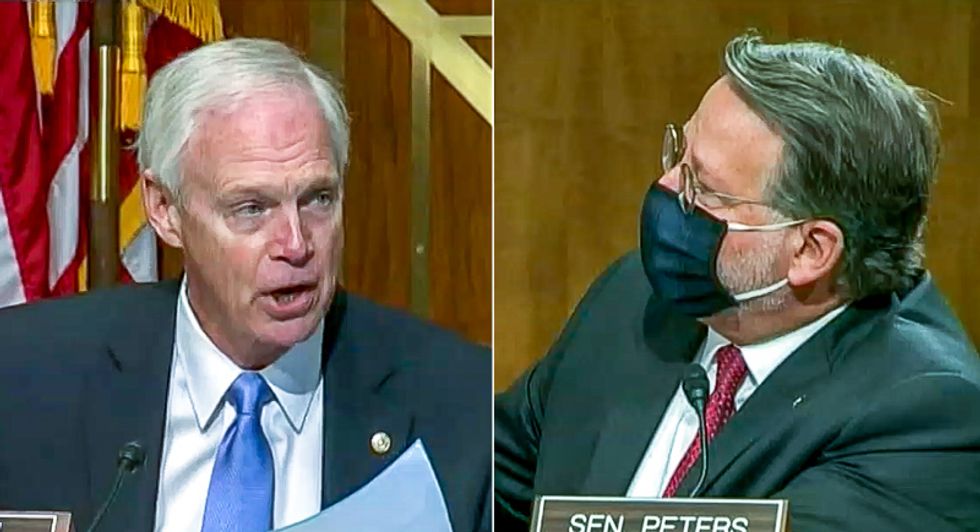 In his opening statement, Peters had blasted Johnson for holding a "dangerous" hearing on election fraud that he said could "undermine" faith in democracy.

"Senior Democrat leaders including ranking member Peters were involved in a process of creating a false intelligence product that was supposed to be classified, they leaked to the media that accused [Sen. Chuck Grassley] and myself of accepting and disseminating Russian disinformation," Johnson complained. "So it's just galling and I just have to point out that the purveyors of Russian disinformation -- Hillary Clinton's campaign, the DNC, the Steele dossier... that's where the disinformation is coming. That's where the false information, the lies, the false allegations."

"I can't sit by here and listen to this," he continued. "This is not disinformation at this hearing today. This is getting information that we have to take a look at to restore confidence in our election integrity. We're not going to be able to just move on without bringing up these irregularities, examining them and providing an explanation."

Peters insisted on a response: "You're saying I'm putting out disinformation."

"Mr. Chairman, this is not about airing your grievances," Peters replied. "I don't know what rabbit hole you're running down."

"That's simply not what we're dealing with," Peters insisted. "You can't simply make false allegations and then drop it."

"This is terrible what you're doing to this committee," he added.

"It is what you have done to this committee!" Johnson snapped. "Falsely accusing the chairman of spreading disinformation. Nothing could be further from the truth and you're spouting it again, which is why I had to respond."

"This is outrageous," Peter lamented as Johnson called on the next speaker.