A brief history of the NFL, ‘The Star-Spangled Banner,’ the Super Bowl and their tangled saga of patriotism and dissent

When NFL Commissioner Elmer Layden visited the White House in August 1945, no sitting president had ever attended a professional football game. World War II was coming to a close and the commissioner presented President Harry Truman with a golden pass to any game on any day.

Pro football was still in its infancy. The NFL was barely 25 years old, and both baseball and boxing were more popular. So Layden made a promise that would inspire headlines and maximize his publicity stunt. The wartime practice of playing “The Star-Spangled Banner” at every game would continue forever.

“The playing of the national anthem should be as much a part of every game as the kickoff,” he proclaimed.

“The Star-Spangled Banner” was written by Francis Scott Key in September 1814, after the Georgetown lawyer witnessed the surprising and successful defense of Baltimore from British attack during the War of 1812. He did not write a poem, as most have been taught, but crafted a lyric to fit an already well-known melody. His creation is and has always been a song, an alloy of words and music to inspire hearts and change minds.

Key’s goal was to unite a divided nation. 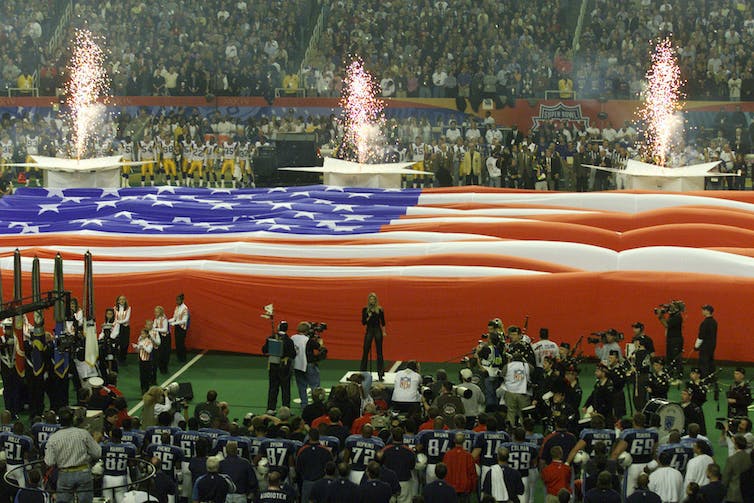 For the first time in 22 years, the Super Bowl anthem this year will be sung at a time when the country is not officially at war.

America’s troops have returned from Afghanistan. Yet military action brews in Ukraine, and battles at home are waged over public health mandates, voting rights, schoolbooks and the value of American lives Black, white, brown and blue. American democracy is by definition a chaotic experiment, yet many Americans today may be united less by patriotism than by a shared anxiety – a feeling that the nation is in crisis, the fear of a breaking point.

In the book “O Say Can You Hear?: A Cultural Biography of ‘The Star-Spangled Banner,’” I explore U.S. history through its national anthem. Chapters in my book examine Key’s authorship, life and relationship to slavery; the origin of the tune; its long-standing use in protest and how it became the rallying cry of the Union. As I explain in my book, the Civil War sanctified Key’s song, making it the only viable choice as the nation’s anthem when in 1931 Congress finally got around to declaring it so.

The first documented performance of “The Star-Spangled Banner” at an American sporting event occurred during the U.S. Civil War. On May 15, 1862, a brass band played Key’s song before a baseball game to dedicate Brooklyn’s new Union Base-Ball Grounds. The song was rare in the early days of professional baseball, as only opening day or a championship merited the expense of hiring a band to play it. At the first World Series in 1903, “The Star-Spangled Banner” was played twice in a single game.

World war raised the stakes of patriotic rhetoric for pro sports. During World War I, baseball executives argued that their business was vital to morale on the home front and that pro athletes should be exempt from the military draft. Their arguments failed. Baseball was declared “nonessential,” player rosters were decimated and the 1918 season cut short.

At the start of World War II, President Franklin D. Roosevelt ordered that baseball continue, and in that moment patriotism and the business of sport became forever linked.

A symbol of protest

Playing the anthem at every game became a flashpoint in the 1960s. Interestingly, the controversy arose not during a football game but during the Olympics, when, in 1968, American sprinters Tommie Smith and John Carlos raised their Black fists on the medal podium to protest racial injustice. By 1973, the U.S. Olympic Committee attempted to skip the anthem at a qualifying meet to avoid controversy.

The backlash was immediate. 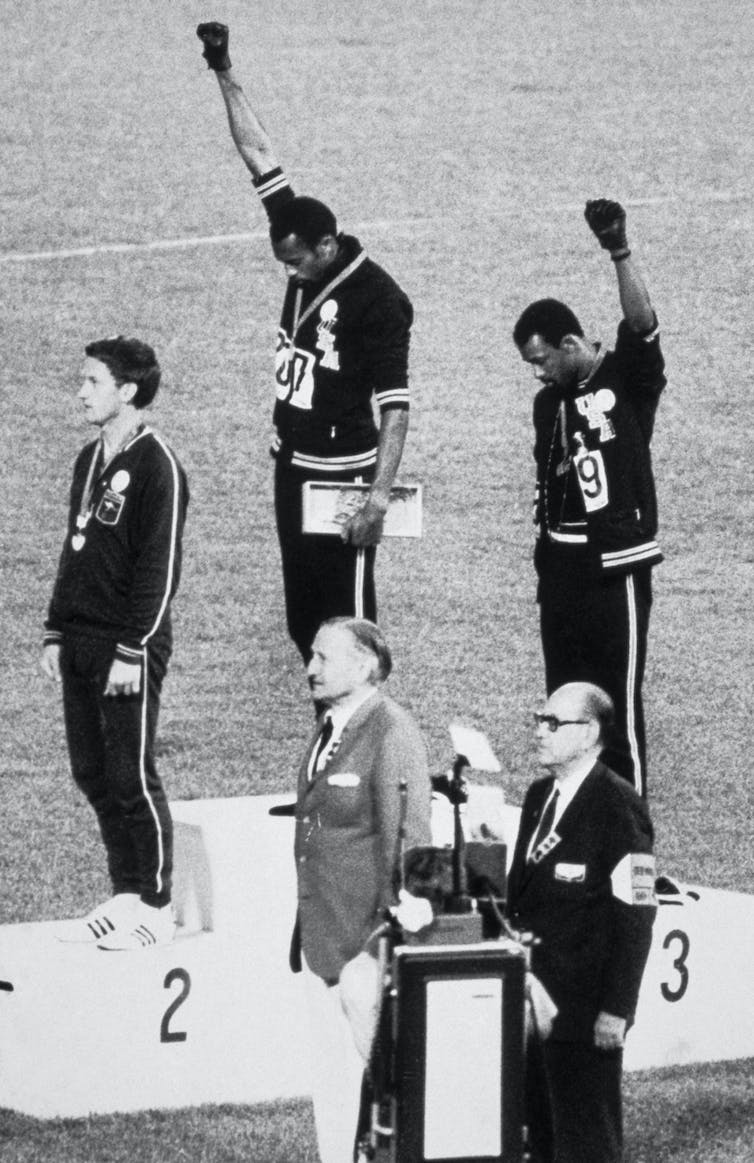 American sprinters Tommie Smith (center) and John Carlos raise their fists and give the Black Power Salute during the U.S. national anthem at the 1968 Olympic Games in Mexico City.

When the Vietnam War ended and the nation celebrated its 200th birthday in 1976, protests around the anthem subsided. By 1977, the NFL could safely break its promise. Super Bowl organizers that year featured “America the Beautiful” instead of the national anthem, and no controversy ensued.

In 1991 Whitney Houston’s celebrated Super Bowl XXV anthem marked a turning point, both musically and socially. Her signature arrangement added a beat to each bar, allowing her voice to expand and soar.

Her rendition was an ecstatic gospel ballad, a sacred hymn to the nation. Radiating a moment of optimism as the U.S.-led military of Operation Desert Storm dominated Iraqi forces in the Persian Gulf, Houston’s voice activated a renewed wave of patriotic pride. As she sang, tens of thousands of people packed into the stadium waved miniature American flags.

Today, the NFL’s promise to play the anthem at every game cuts both ways.

As a lawsuit boils over the hiring practices for Black coaches, the anthem has again become a flashpoint, expressing tribal affiliation as much as unity. When in 2016 Colin Kaepernick knelt in protest over racial injustice and President Donald J. Trump attacked the gesture as un-American, the anthem ritual not only served as a platform for protest but became a divisive tool of the culture war. 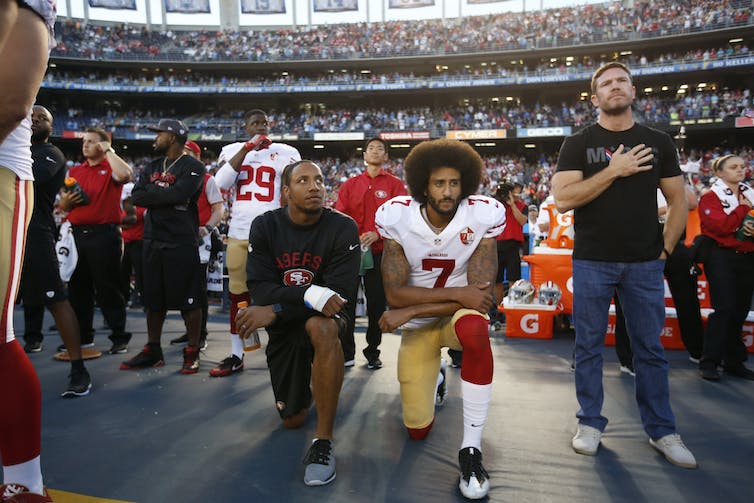 Before the start of this 2016 game, San Francisco 49ers Eric Reid and Colin Kaepernick (#7) knelt during the national anthem in protest of racial injustice.

For Super Bowl LVI, three songs performed by four Black American female vocalists will offer a musical suite of unity in the face of division.

The gospel duo Mary Mary will sing the Black national anthem “Lift Every Voice and Sing.” Promising to “march on till victory is won,” the 1899 lyric by civil rights activist and poet James Weldon Johnson affirms his enduring belief, despite the lived experience of racial segregation and injustice, in the dream of a nation founded upon the principles of freedom and equality.

Neo-soul stylist Jhené Aiko will perform “America the Beautiful.” The song has preceded the Super Bowl anthem since 2009. Its peaceful melodic strains and pastoral, seemingly uncomplicated opening lyrics are preferred by some as the nation’s musical signature. 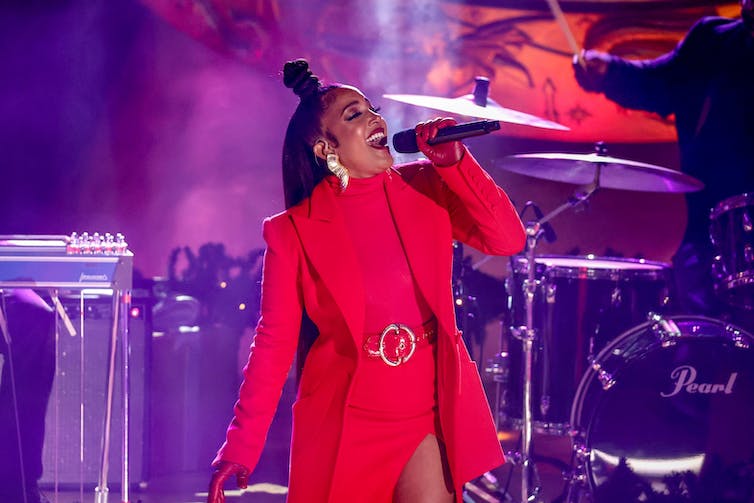 In this 2021 photograph, country star Mickey Guyton performs onstage during a tree-lighting ceremony.

Finally, the Texas-born country singer Mickey Guyton will offer “The Star-Spangled Banner.” Her very presence upends assumptions on both sides of today’s culture war. She is a rare Black female star in a historically white conservative genre. Her unlikely 2020 hit “Black Like Me” received little radio play but became popular on social media. Embraced by critics, the song made Guyton the first-ever Black woman to receive a Grammy nomination for best country solo performance.

In my view, this year’s attempt by the NFL to engineer a feel-good anthem for all is a fool’s errand. No political gesture today can please everyone. Yet football may be the one remaining institution that still brings Americans together across the political barricades. It is each year’s most-watched television event and I, like many of its anticipated 100 million other viewers, still cherish the annual Super Bowl anthem.

For me, the anthem is not a worn, unchanging icon but a contemporary act of citizenship. Every performance is a living expression of community, one renewed time and again by musical artists who can elevate lyric and melody to meet the moment and share a collective belief in the nation’s promise. In song anew, that promise again becomes the responsibility of us all.