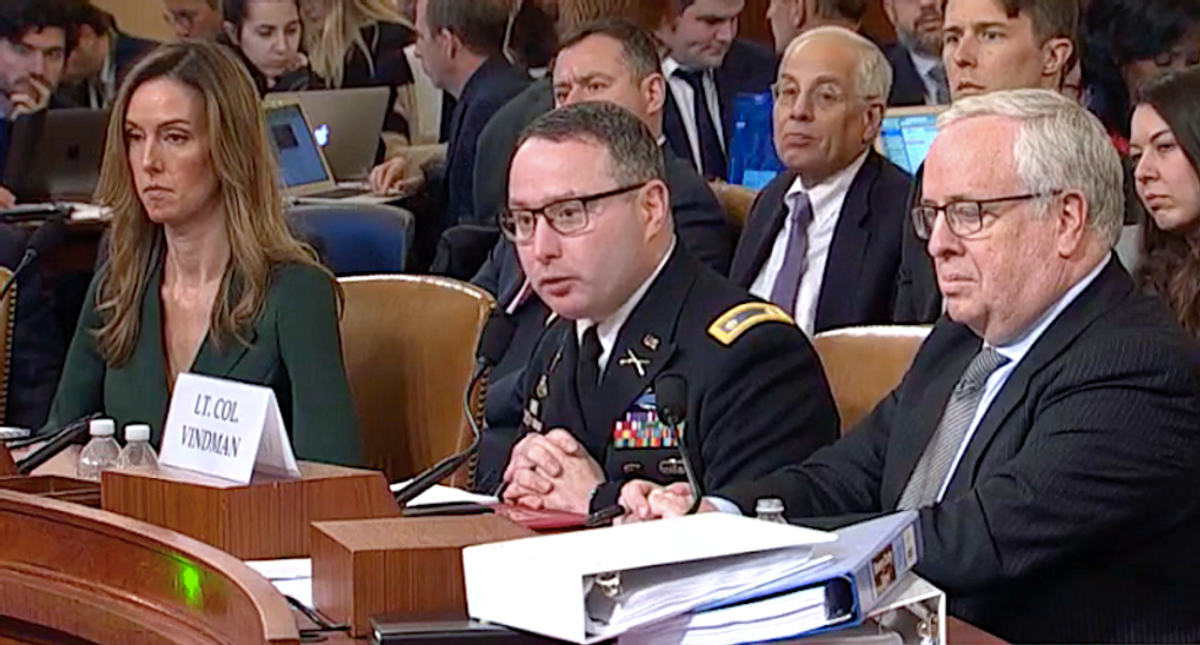 "Since July 2018, I'd been at the National Security Council, serving as the director for Eastern Europe, the Caucasus, and Russia," he continued. "Recently, deep concerns had been growing throughout the U.S. foreign-policy community regarding two of the countries I was responsible for. We'd long been confused by the president's policy of accommodation and appeasement toward Russia. But now there were new, rapidly emerging worries. This time the issue was the president's inexplicable hostility toward a U.S. partner crucial to our Russia strategy: Ukraine."

He explained that there was a fear that after all of their work, Trump's sudden interest in Ukraine would result in a random tweet that destroyed all the work they'd done.

"Because it's not as if Trump ever made active changes in policy," said Vindman. "Indeed, the interagency staff had never been alerted by the West Wing to any shift in national direction."

He noted he was working more than the normal 14-hour days at the NSC, and he'd barely seen his family in weeks. As the big call approached, he noticed something that could be dangerous: Rudy Giuliani. Out of the blue, Giuliani was suddenly involved in Eastern Europe, going on some "mysterious errand" that involved EU Ambassador Gordon Sondland and then-chief of staff Mick Mulvaney. He recalled that weeks earlier there was a meeting where Sondland suggested if President Zelensky agreed to certain investigations, involving Joe Biden, he'd get to come to the White House.

"I wanted to believe Sondland was a loose cannon, floating wild ideas of his own, with support from a few misguided colleagues. But he wasn't a freelancing outlier like Giuliani. He was an appointed government official. His maneuverings had me worried," wrote Vindman.

The call was to take place July 22, but suddenly it got moved to July 25. On the way to the White House, he suggested having lawyers listen into the call. He was ignored by his new boss who'd replaced Fiona Hill just days before the call. He sat in the basement of the White House on the call, waiting for the president to be connected. He was hopeful, he said.

"The White House operator said, 'The parties are now connected,'" he wrote. "Trump began speaking, and I knew right away that everything was going wrong."

"I will say that we do a lot for Ukraine," Vindman said he heard Trump tell Zelensky. "We spend a lot of effort and a lot of time, much more than the European countries are doing, and they should be helping you more than they are. Germany does almost nothing for you."

"The president's tone was detached, unfriendly," the book continued. "His voice was lower and deeper than usual, as if he were having a bad morning. He wasn't in the room with us—he was taking the call in the residence, but that wasn't unusual for him. He was routinely unavailable, and certainly not present in the Oval Office, until late morning or early afternoon."

He said that Zelensky was trying to use humor, flattery, to win Trump over. He was joking about his own poll numbers and about himself. "Zelensky was giving it everything he had," wrote Vindman. Trump wasn't using the talking points. He went into a whole different thing that had nothing to do with the talking points.

He said that he realized all hope was gone and that he'd have to move on. It was something he said the foreign policy world does a lot. Given Trump's "erratic behavior, that's what we'd all learned to do," he explained. He started thinking of ways to fix the situation after the fact.

"The fact is that because Trump never provided any policy guidance, nobody in responsible circles—people far senior to me—ever took his remarks seriously," Vindman wrote. "They'd wait to see if anything more substantive confirmed what he'd said, continuing, in the meantime, to pursue agreed-upon directions. Because Tim Morrison, my new boss at NSC, had also directed that we continue on course and not treat anything the president might say as a change in policy, there was really nothing else to do."

When Trump made the now-infamous comment, "I would like you to do us a favor, though," Vindman said he stopped taking notes.

That's when the conspiracy talk began. Trump went off on Ukraine being behind the 2016 election hack, not Russia. It was a Russian propaganda point. He said Zelensky was cheerful, trying to promise Trump that they are open to any kind of cooperation with the United States.

Vindman said he was "growing more unsettled," but started taking notes again. "the other thing," Trump then said, rattling off the conspiracy about Biden's son. He was shocked.

"My glance around the table confirmed that I wasn't the only one taking in what was happening," he wrote. He recalled his new boss, a lawyer, with his eyes darting around to everyone else in the room.

He said that was the point they realized that it was what Giuliani, Sondland and Mulvaney had cooked up.

The rest of the excerpt recalls the call's aftermath.

Check it out here.