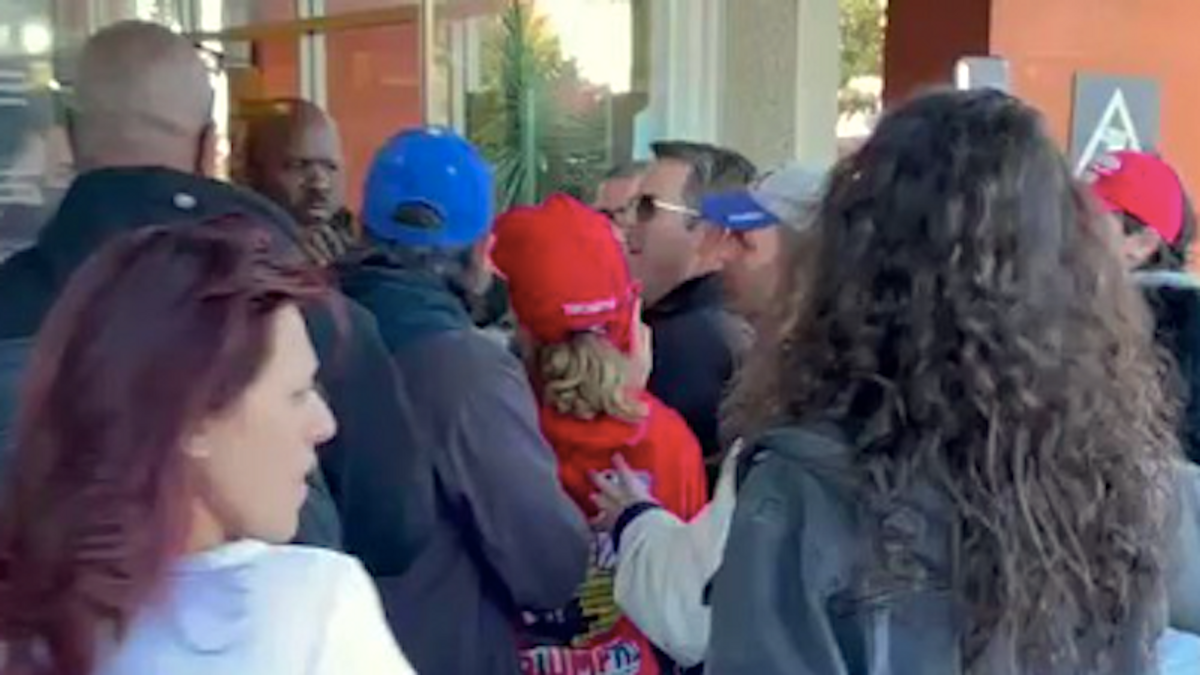 Police were called Tuesday afternoon to Erewhon Market in the Fairfax district after demonstrators pushed their way into the grocery and aggressively confronted employees and customers over coronavirus restrictions, reported KTLA-TV.

"We're not here coughing everything, smearing everything," said protester Jason Traver. "We just want to shop, we want to take our own precautions that we've been doing all of our lives, and we'll be fine."

A bystander recorded video of the confrontation, which was widely shared on social media, and a Daily Beast correspondent spoke to several witnesses and participants.

"The masks do nothing!" bellowed one woman wearing a red "MAGA" hat. "That's why you can wear anything! I don't wear underwear over my face! I'll pull off my underwear right now and put them over my face."

The protesters ranted about various conspiracy theories regarding the pandemic and the recently approved vaccine, and one woman in a "MAGA" hat turned "my body, my choice" pro-choice rhetoric on its head.

"They were all a slice of the freakish pie that is part of the U.S. right now," witness Bevan Thomas told The Daily Beast.

A record 7,181 people were hospitalized with COVID-19 in Los Angeles County on Tuesday, and bystanders were mystified and angered by the protest.

"It's very frustrating because in L.A. right now we have less than 0% capacity ICU beds," said one bystander, who gave his name only as Cody. "The least you could do is wear a mask, and I don't know why you're trying to attack a business that's just trying to survive during the pandemic."

Thomas, who has recovered from COVID-19 but continues to wear a mask as a courtesy and precaution, said the protest made no sense to her.

"It was baffling to me they had so much passion against that when it came to another person's well-being," Thomas said. "Just a lot of yelling and pushing and antagonism, they had a lot of anxiety."

But she also sensed they enjoyed the reactions they provoked.

"There was like a smugness, almost a performance art aspect," Thomas told the Beast.

I was just trying to buy some groceries at @ErewhonMarket when 50 anti-maskers stormed the entrance in a stampede.… https://t.co/bB1K4YTdnD
— ira brian miller (@ira brian miller)1609286076.0