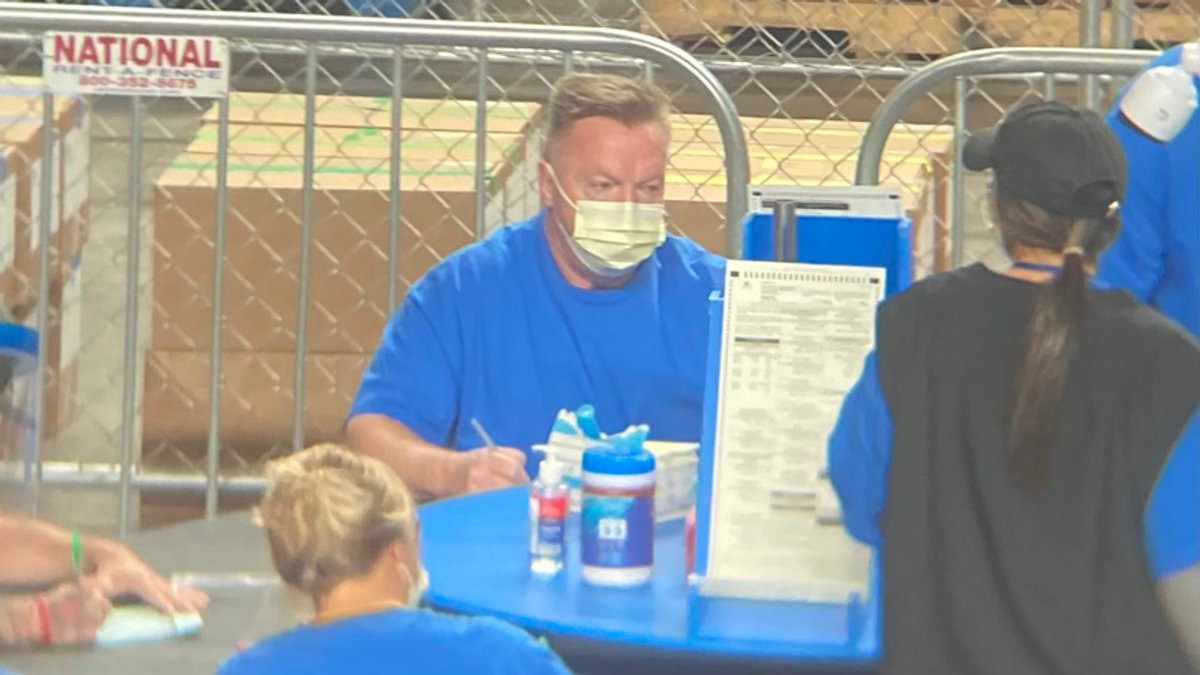 Arizona Republicans have limited press access to their controversial audit of Maricopa County ballots, but have allowed in a pool reporter.

On Friday, that responsibility fell to Arizona Republic reporter Ryan Randazzo. Who was kicked out.

Randazzo tweeted a picture, announcing that he was let in over an hour late.

Today is my shift at the Veterans Memorial Coliseum for the Maricopa County election audit. Media was supposed to g… https://t.co/OrAmf3nQRP
— Ryan Randazzo (@Ryan Randazzo)1619799624.0

However, it is a different photo that reportedly got Randazzo escorted out of the building.

Democrats in Arizona have asked the FBI to investigate Kern for his role in the January 6th insurrection.

After Randazzo posted the picture of Kern, he reported he was escorted out the building.

Well, a man in a cowboy hat and a badge that said Wake TSI just came over, asked if I tweeted the picture of Anthony Kern, and when I said yes he escorted me out of the building and said my press privileges were “revoked"
— Ryan Randazzo (@utilityreporter) April 30, 2021

Senate President @FannKfann, who is in charge of the audit, is saying I broke a judge's order. This is false. We have no judge's order. We have an agreement not to show any discernible info on ballots. And our agreement states specifically we can/will show faces. #azauditpool
— Ryan Randazzo (@utilityreporter) April 30, 2021

The newspaper is standing by Randazzo.

"The Arizona Republic never agreed to obscure faces," Arizona Republic Editor Greg Burton said. "The Senate's own livestream on the floor shows faces of everybody involved. We agreed not to show ballot details, which we have adhered to, but clearly, you can't take a picture in a room full of ballots without showing ballots at a distance. Anyone looking at the live feed gets the same view."

I believe it is a felony to take a picture of someone's ballot in Arizona. Please look into this @GeneralBrnovich.… https://t.co/V3EJLOeMSC
— Anthony Kern (@Anthony Kern)1619816242.0

Laurie Roberts, a columnist for The Republic, blasted Republicans for kicking out her colleague.

"The auditors claim Randazzo violated a court order and somehow compromised voter privacy," Roberts wrote. "That's about as laughable as the auditors' talk this week about their 'ongoing efforts to be transparent' even as they were asking a judge to let them keep secret the details about how they are handling our ballots. About as laughable as the notion that what Republicans are calling 'America's audit' – conducted and largely paid for by Trump supporters – is, in any way, credible."

"To repeat, the media agreed only not to publish pictures that show 'identifiable ballot information.' The only thing identifiable in Randazzo's picture is the sheer outrageousness of this whole joke of an Arizona election audit," she explained. "If Brnovich investigates anything, it should be the legality of allowing private contractors — people who have no expertise in elections except a heartfelt belief that this was one stolen —to take control of Maricopa County's 2.1 million. Or how about an attorney general investigation into the legality of hiding the names of the people who are donating money to fund this official state audit."

"Alas, I don't look to Brnovich to stand up to anybody here. The Republican AG is, after all, expected to run for the Senate next year, and it wouldn't do to rile the base," she noted.