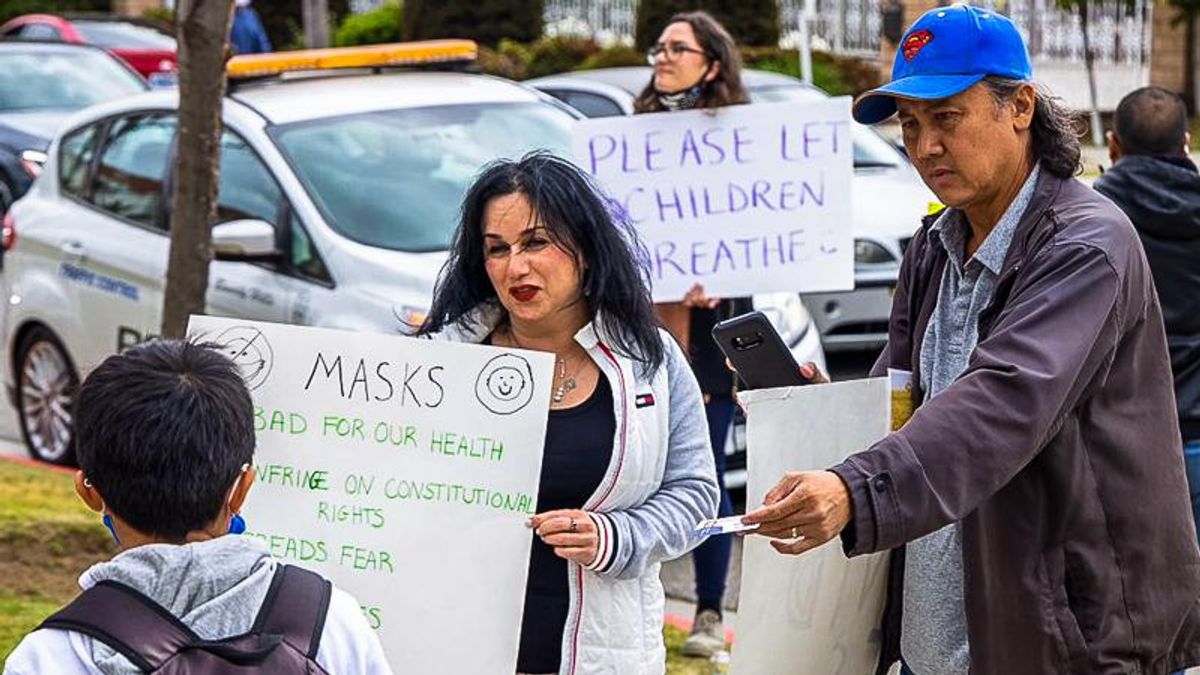 Protesters at the event handed flyers to children and told them not to wear masks. The protesters also held signs reading "Question COVID lies" and "Let the children breathe."

Braslow said that the children could be seen crumpling up the flyers. Some school staff worked to shield the children from the protesters.

One woman claimed that the U.S. Constitution requires children to have a "medical license" to wear marks.

"Ask parents to file a lawsuit against teachers, principals and school districts," she told Braslow. "Because according to our Constitution, only a person who has a medical license can practice medicine. And a mask is a medical device."

Watch some of the video clips below.

At hawthorn elementary school in Beverly Hills, where a small group of anti-maskers has gathered with signs and flyers to protest public safety measures. They are telling passing children not to wear masks. pic.twitter.com/hsZvrRXNdP
— Samuel Braslow (@SamBraslow) April 21, 2021

Anti-maskers are handing out cards and flyers to kids. A few students have crumpled up the flyer. pic.twitter.com/vGjQdPIdXq
— Samuel Braslow (@SamBraslow) April 21, 2021

An administrator asks the group why they're not at the Department of Public Health. “To big for you?" pic.twitter.com/1ZKTrK77vV
— Samuel Braslow (@SamBraslow) April 21, 2021

Staff worked to keep the students away from the protesters as much as possible, as seen here where a staff member pulls a kid away from the group. pic.twitter.com/rPTNtp6NAt
— Samuel Braslow (@SamBraslow) April 21, 2021

Shiva Bagheri, who organized the protest, argues with a kid who tells her that masks work. “You think it does because they told you that, sweetheart...it's called propaganda."

In response, the child sticks his tongue out at her. pic.twitter.com/d88RrwuZNL
— Samuel Braslow (@SamBraslow) April 21, 2021

A protester tells parents to sue the school for requiring masks—a County Public Health guideline—because “only a person with a medical license can practice medicine" and masks, she says, are “a medical device." pic.twitter.com/QClfoxjluz
— Samuel Braslow (@SamBraslow) April 21, 2021

An administrator tells a protester that the kids are doing fine. The anti-masker says that it's “awkward being a kid anyway." pic.twitter.com/TDbMdvmbBQ
— Samuel Braslow (@SamBraslow) April 21, 2021

A photo from the event. An anti-mask protester tries to hand out what appears to be a business card to an elementary student. pic.twitter.com/FjgPlGbQQh
— Samuel Braslow (@SamBraslow) April 22, 2021