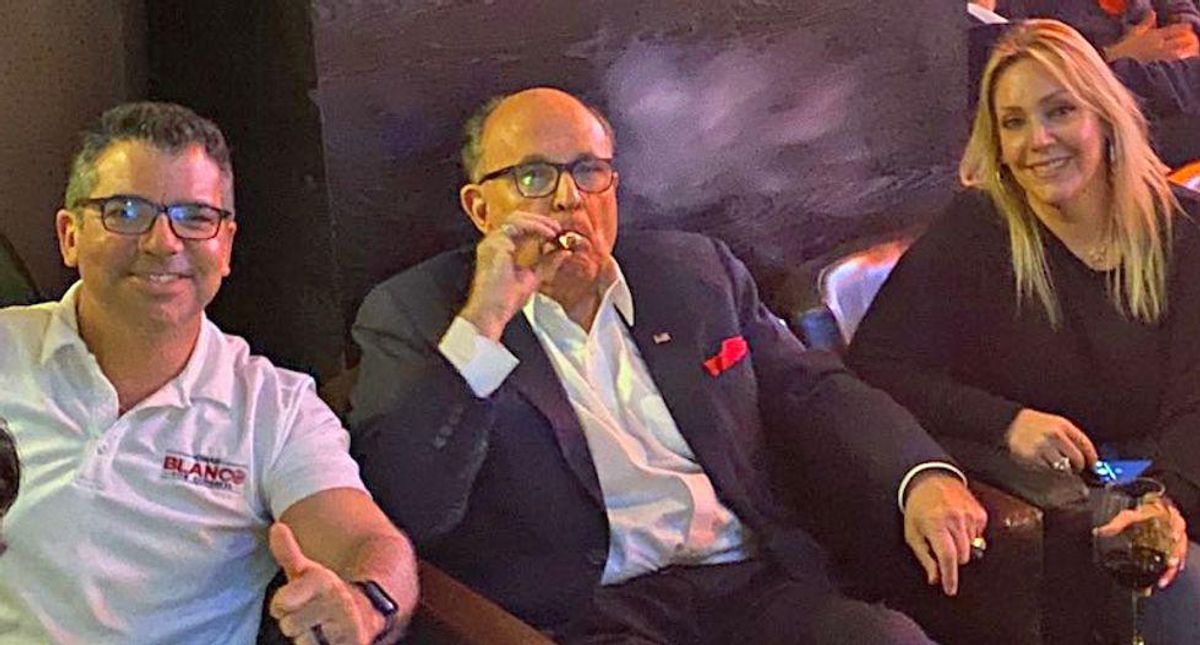 In an exclusive report Tuesday, TIME Magazine revealed that Russian foreign agents called Rudy Giuliani "useful" in their efforts to undermine the 2020 election.

Andriy Derkach wrote to reporter Simon Shuster that he would meet to answer questions. The man has been called an "active Russian agent" by both President Donald Trump's administration and Joe Biden's. It's a determination that Derkach denies.

He said that the idea that he was involved in the 2020 election was "rumors and gossip." He only went after the Biden family to expose corruption. He dodged questions about being a Russian operative, saying instead he wanted to talk about Biden.

"In the fall of 2019, he gained access to Trump's inner circle through Rudy Giuliani, the President's personal lawyer," the report explained. "He then provided Giuliani with documents purporting to show that Joe Biden and his family were involved in corruption. After their first meeting, Derkach even posted a photo of himself with Giuliani on Facebook, mugging for the camera as they exchanged a stack of documents. In the months before Election Day, he released a series of secret recordings of Biden pressuring top Ukrainian officials to fight corruption. The source of those tapes remains a mystery to this day."

The story cited both the FBI and CIA who warned Trump's team that Derkach was pushing a Russian disinformation effort, but his allies didn't care and continued promoting the conspiracy all over social media. A month before Election Day and the first debate, QAnon cult members, and Q himself, began promoting Derkach too.

"The plot served multiple interests," the report continued. "Derkach could not have gotten through to American voters without help from Trump and Giuliani, while the Trump campaign's attacks against the Biden family relied in large part on the ammunition Derkach provided. Whatever the truth of the U.S. allegations against Derkach, Russia benefited from his efforts."

"Giuliani is a very capable lawyer. I appreciated his meticulousness," Derkach said. "When we spoke, it was very useful for me. He records everything. He writes everything down in his notebook. He never relaxes."

Trump had pressed Ukraine's president to investigate the Bidens based on the documents given by the Russians. That ended up in the first Trump impeachment. So, Giuliani embarked on his own rogue invstigation.

Among those who helped him was former diplomat Andriy Telizhenko, a big Trump Fan who loved cigars and whisky as much as the former mayor did, the report said.

"His function, Telizhenko told me, was 'just to help Mr. Giuliani connect to the right people in Kyiv, filter the evidence, what is true, what is not true.' The information came from every corner of Ukraine's political swamp: local tycoons, political operatives, corrupt cops and prosecutors. 'We were getting stuff from everywhere,' Telizhenko says. 'Documents, tapes, you name it.'"

Telizhenko would tell Giuliani who was reliable or not, then they would pass the findings onto Trump's allies in Washington, including Republican lawmakers and Attorney General Bill Barr. According to the TIME report, Barr created something he called an "intake process" to evaluate the credibility of the evidence. Without so much as a google search, Giuliani begged to meet with Derkach while they were both in Ukraine.

"Two Republican Senators, Ron Johnson of Wisconsin and Chuck Grassley of Iowa, used some of Giuliani's material in their own investigation of the Biden family," said the report.

It's unclear if Giuliani gave Johnson the documents or Derkach handed them over directly. A Congressional watchdog group demanded to know the details of meetings that Johnson had with the Russian agent. Johnson is on the Committee on Homeland Security and Governmental Affairs and Foreign Relations Committee despite his contact with someone deemed to be a sanctioned Russian spy by the U.S. Government.

Telizhenko tried to warn Giuliani about the reliability of Derkach and his ties to Russia but Giuliani continued anyway.

Nothing that Guiliani ever collected was deemed credible enough for Barr to act on it. At the same time, not even Fox News would run Giuliani's mini-documentary on what he "found" in Ukraine.

Ultimately, Trump's own administration officials debunked the conspiracy theories that Giuliani was pushing. Still, he maintained, "I can prove it!" Telling ABC News in late Sept. 2019 that members of the Clinton campaign "were colluding with the Ukrainians, conspiring with the Ukrainians!"

The rest of his conspiracies continue to this day as the Justice Department is investigating his work as an unregistered foreign agent.

Read the rest of the story at TIME Magazine.