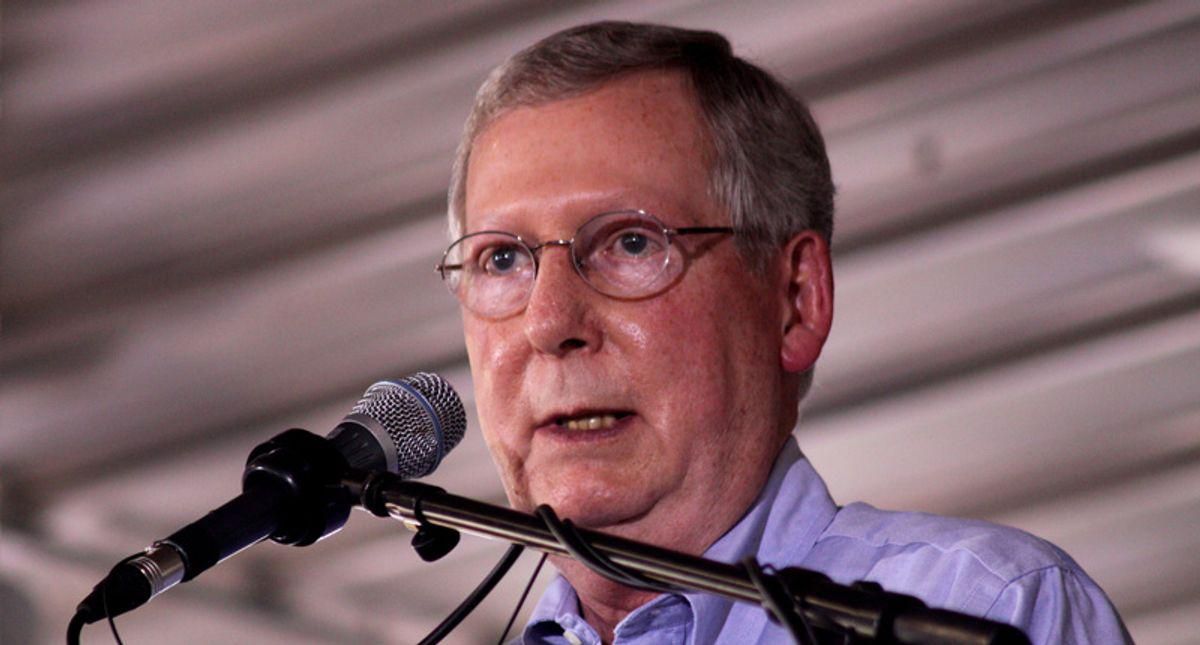 Senate Minority Leader Mitch McConnell was rebuked Wednesday for his assertion that proposed pro-democracy legislation was a "power grab" by Democrats while at the same time denying that state-level GOP lawmakers are pushing voter suppression measures nationwide.

McConnell made the provocative remarks during a Senate Rules Committee hearing on S.1, the For the People Act.

According to the Kentucky Republican, however, S.1 is "clearly an effort by one party to rewrite the rules of the political system."

"We should be finding ways to rebuild trust, not destroy it further. That's exactly what a partisan power grab would guarantee," he said.

"Mitch McConnell called the For the People Act a 'power grab.' This is a bill that stops voter suppression and ends gerrymandering," the group tweeted. "How depraved do you have to be to insist that more people voting is somehow a power grab? What sort of anti-democratic garbage is that?"

In a separate tweet, Public Citizen suggested McConnell "is absolutely terrified of a bill that simply makes it easier for people to vote. This tells you all you need to know."

McConnell also falsely claimed at the hearing that "states are not engaging in trying to suppress voters whatsoever."

But that "denial," Eric Lutz wrote at Vanity Fair, "doesn't settle the matter any more than a kid covered in crumbs denying he raided the cookie jar would."

a recent Washington Post analysis noted that the GOP push to impose new voting restrictions may very well amount to "the most sweeping contraction of ballot access in the United States since the end of Reconstruction." As of last week, the Brennan Center found that more than 253 bills restricting voting access had been carried over, pre-filed, or introduced in 43 states.
The Associated Press reported that the Republican Party's "nationwide campaign to restrict access to the ballot" has become the GOP's "unifying mission," eclipsing other traditional issues.

Today alone, as author and voting rights expert Ari Berman noted on Twitter, state Senate Republicans in Michigan rolled out 39 bills that would curtail access to the polls.

Watchdog group CREW said that if "McConnell had any good arguments against the For the People Act, he would not be lying about states' efforts to suppress the vote or the racist history of the filibuster"—a reference to his inaccurate claim Tuesday that the Senate filibuster has "no racial history at all."

Taking issue with the overall message delivered by Republicans on Wednesday, Christina Harvey, managing director at Stand Up America, called on Democratic lawmakers to cut through GOP lies.

"Today's hearing made clear that Republican lawmakers will stop at nothing to suppress the vote—including blatantly lying to the American people about the For the People Act," she said.

Harvey praised Democrats for making "an incredibly compelling case for passing this landmark anti-corruption and pro-democracy legislation" and criticized GOP senators like Ted Cruz of Texas who "continue to spread the same disinformation that led to the Capitol insurrection."

She further urged Democrats to "move quickly to pass this bill with 51 votes before the end of [President Joe] Biden's first 100 days in office."