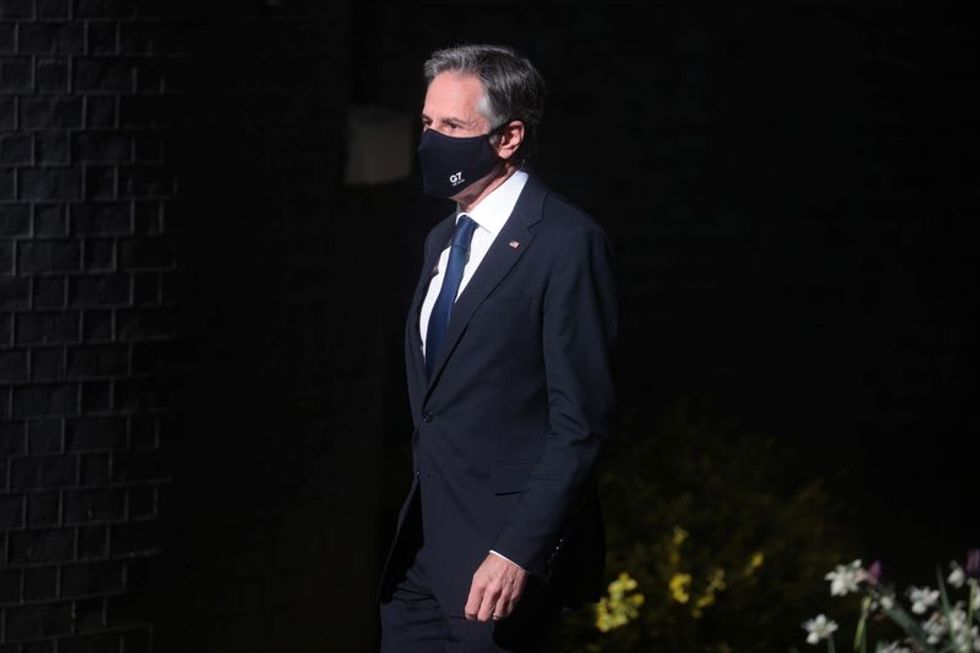 By Matthias Williams and Natalia Zinets

KYIV (Reuters) -U.S. Secretary of State Antony Blinken visited Kyiv on Thursday in a show of support after Russia massed troops near Ukraine's eastern border in a standoff that sent alarm bells ringing in Western capitals.

Blinken is due to meet President Volodymyr Zelenskiy, mixing solidarity with calls for Ukraine to stick to a path of reforms and fighting corruption.

"I'm here really for a very simple reason, which is to on behalf of President Biden reaffirm strongly our commitment to the partnership between our countries," Blinken said when meeting Foreign Minister Dmytro Kuleba in Kyiv.

U.S. President Joe Biden pledged "unwavering support" to Zelenskiy in April as Kyiv and Moscow traded blame for clashes in Ukraine's eastern Donbass region and Russia deployed troops and weapons to the border.

Moscow announced a withdrawal of its forces on April 22, helping pave the way for a summit between Biden and Russian President Vladimir Putin that could take place as early as June.

The standoff prompted Ukraine to call for the United States and Europe to help speed up Kyiv's entry into the NATO military alliance. Blinken also discussed Russia's troop build-up at a meeting with NATO allies in Brussels last month.

Blinken said Washington had a "commitment to work with you and continue to strengthen your own democracy, building institutions advancing your reforms against corruption," according to a pool report.

Washington has been Kyiv's most powerful backer since Russia's annexation of Crimea in 2014 and the outbreak of the Donbass conflict between Ukrainian soldiers and Russian-backed separatist forces that Kyiv says has killed 14,000 people in seven years.

The relationship was tested in 2019 when then-President Donald Trump asked Zelenskiy to investigate Biden and the business activities of his son Hunter in Ukraine, and the Trump administration temporarily froze security aid to Kyiv.

The fallout from those events, which led to Trump’s impeachment trial, continued last week as federal agents raided the apartment and office of Trump's former personal lawyer Rudy Giuliani in relation to his activities in Ukraine.

Since Biden took office, his administration has urged Ukraine to stick to its reform commitments and Blinken is expected to press Zelenskiy's government on the dismissal of Andriy Kobolyev, a reformer, as head of the state energy firm Naftogaz.

In a CNN interview this week, Kuleba also said Ukraine was asking for air defence systems and anti-sniper technology.