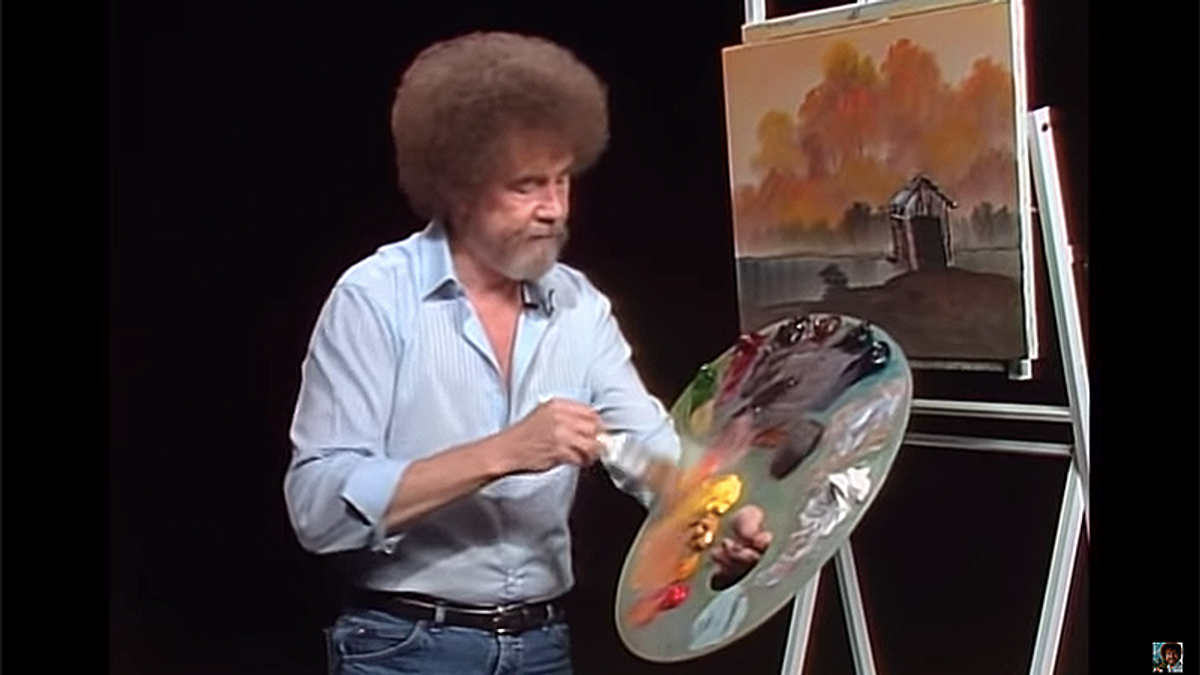 But the most shocking thing about the warm, calm painter is that after his death he has become a pop-culture icon leading to a legal battle.

The daughter of Ross' partners, Annette and Walt Kowalski, is running Bob Ross, Inc. which has been accused of making millions by illegally licensing his image for the last 10 years beyond what was the original business. While the intellectual property piece of the legal argument might not surprise lawyers, the details got pretty dark.

According to the Daily Beast, it involved "incorporating deathbed marriages, last-minute estate changes, CIA-style tape recordings, and even a real-life former CIA agent. It was all made even more bizarre by the plaintiff who filed suit: Bob's very own son Steve Ross, a long-standing superstar in the sub-universe of Bob Ross fandom who had largely dropped off the face of the Earth after his father's death—and was even rumored to have met his own demise some years earlier."

After Bob Ross' passing in 1995, the Kowalskis launched lawsuits with financial claims to his estate, despite Ross's widow, half-brother and son were still alive.

"All in all, the strategy was designed to gain total control of Bob's afterlife—despite Bob's clear intent otherwise," said the Beast. "One of Bob's close friends took to calling the effort 'Grand Theft Bob,' and for 25 years, until now, the story has been known only to a handful of people who were often too scared to speak lest they, too, be the subject of a well-financed lawsuit courtesy of Bob Ross, Inc."

Reviewing documents and interviewing over 30 people resulted in an extensive and shocking tale of the life and afterlife of the infamous painter.

Ross' brother Terry Marsh also worked in public television, specifically on a children's show The Adventures of Elmer & Friends where Ross also did a cameo appearance from his Florida home while he was dying from lymphoma. The episode ran two months after Ross died, something that the Kowalskis at Bob Ross, Inc. said should cost the show. They demanded all profits from the show and triple the damages they experienced over the course of the lawsuit.

"The suit also tacked on $500,000 as a penalty for Terry's allegedly 'encouraging, assisting, and cooperating with Bob Ross in the breach of his fiduciary duty of loyalty to Bob Ross, Inc.'" the report also said.

The Kowalskis argued that Ross gave specific limitations to trademarks that approved of things like cartoons. They then assumed that meant Ross did not approve of his actual likeness or person being depicted and that was covered by trademarks.

"In other words, Bob Ross, Inc., owned not just Bob's paintings but Bob himself," the story explained. "Or, more precisely, his ghost."

Ross' brother's attorney explained that because Ross appeared in the video, the Kowalskis claimed it was an infringement of their trademark on Ross.

The battle became a dark one with Annette Kowalski claiming she owned Ross and even threatening to pull "The Joy of Painting" from the Florida PBS station where Ross filmed his appearance on his brother's show. According to his brother, Terry, however, it was Ross' idea to appear as he did so that the filming could be done from afar. Terry said he even paid for the usage of the studio himself because he didn't want to bother his brother with it while he was dealing with health issues.

Ironically, Annette and Walt Kowalski gave permission to Bob to film his brother's show, and there's even a tape recording of the conversation to prove it. Ross started recording conversations as he suffered from memory problems with chemotherapy and radiation. Even though Terry could have won the lawsuit, he simply wanted to be done with the Kowalskis and settled the suit.

In April 1997, when the Kowalskis settled with Ross' estate, they demanded that all tapes of Ross be destroyed.

Read the rest of the bizarre tale of Ross' estate at the Daily Beast.