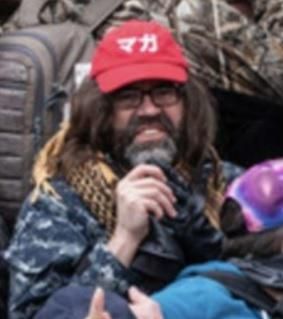 Matthew DaSilva had a signature black-and-gold scarf that he wore every day. But when he sashayed with it at the Capitol riot on January 6, it led two people who know him personally to identify him off on an FBI wanted poster.

DaSilva, from Texas, also was notable for his wildly unruly locks and facial hair. According to the witnesses, upon returning from the Capitol, DaSilva apparently thought a new fashion aura would be a wise idea, as he shaved his long hair and beard.

Now DaSilva is charged by the FBI with a wide range of violent felonies in connection with attacks it says he made upon multiple officers. But unlike many rioters whose actions were captured on social media, the FBI relied upon footage from police bodycams and Capitol cameras.

But it was DaSilva's distinctive appearance that helped the FBI identify him, according to the criminal complaint:

“Witness-2 said that DaSilva had a full beard and long hair for years prior to January 6, 2021, but that upon his return from Washington, D.C., he shaved his beard, cut his hair, and stopped wearing the black and yellow scarf," reads the FBI report. That witness also said DaSilva previously had been in the Navy.

The complaint stated that DaSilva can be seen attacking law-enforcement officials:

“DaSilva can be seen in the front line of rioters grabbing, pushing, and pulling on the shields held by the U.S. Capitol Police and/or Metropolitan Police Department officers defending the Lower West Terrace archway while other rioters attack the officers."

DaSilva was arrested in Lavon, TX. He is charged with assaulting, resisting or impeding officer, obstruction of law enforcement during civil disorder, acts of physical violence and a variety of counts of disorderly conduct and unlawful entry.

You can read the complaint here.