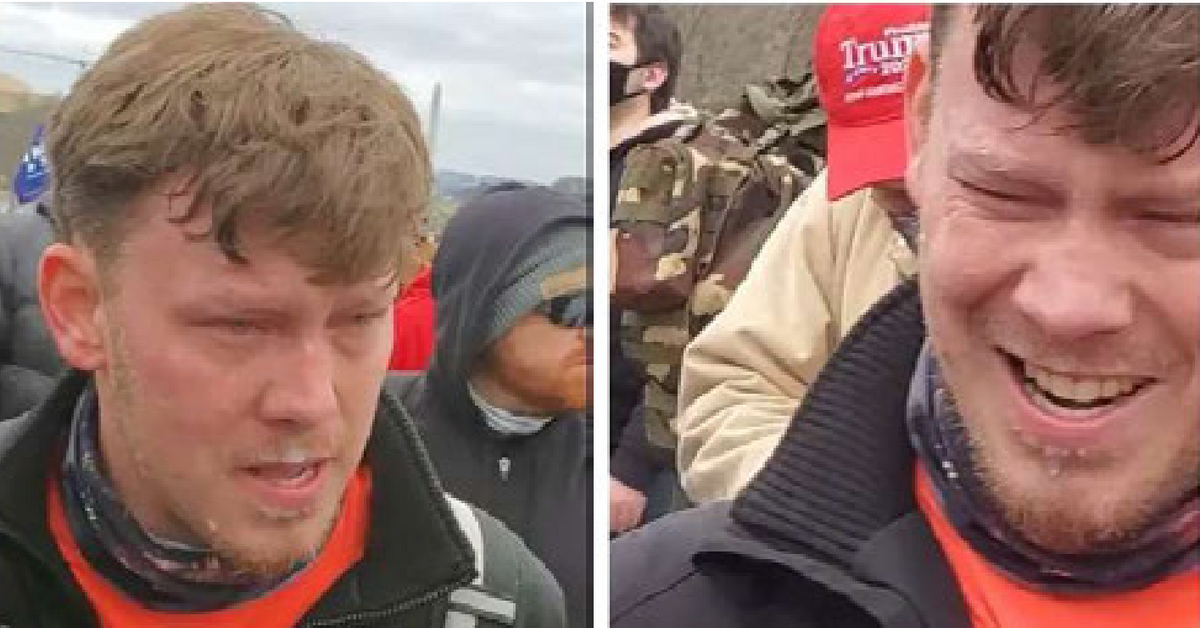 Taake, 32, of Houston, was tipped off to the FBI by someone who said they hadn't met him -- but was texting with him about the riot -- on Bumble.

"Witness 1 messaged Taake on a dating app, Bumble, while he was in Washington, D.C.," prosecutors allege. "Although Taake and Witness 1 never met in person, Taake discussed his participation in the riot with Witness 1 and sent Witness 1 several pictures of himself, including a picture of himself taken on January 6, 2021, after he was allegedly pepper sprayed by law enforcement officers. Witness 1 said Taake admitted to being inside the U.S. Capitol for approximately 30 minutes."

According to the report, "Bumble provides users with the location information of other individuals using the application." That apparently helped the FBI place Taake in Alexandria, VA on a motorcycle headed for the Capitol, as well as on a plane flight to or from Houston.

The FBI stated it was able to identify Taake through photographic evidence.

"The FBI also located publicly posted videos and photographs showing Taake at the U.S. Capitol. Several of these images show Taake using what appears to be a metal whip and pepper spray to attack law enforcement officers. "

The report says that as police lined up behind a barricade of bike racks to defend the Capitol, rioters began attacking including Taake, who "raised his arm and pepper sprayed the officers." Taake then retreated back into the crowd of rioters.

Some 45 minutes later, Taake is seen "striking officers with a weapon that appears to be a whip" before similarly retreating to the crowd, according to the report.

The report identifies Taake as the owner of a business called Hi-Flow Houston.

Taake faces felony charges of assaulting, resisting or impeding officers, as well as variety of obstruction, violent unlawful entry and disorderly conduct charges. You can read the complaint here.

Michael Moline, Florida Phoenix
Gov. Ron DeSantis has ordered an investigation into Facebook following reporting that the company has allowed selected high-profile individuals to violate its rules against spreading medical misinformation, harassment, incitements to violence, and other abusive posts.

The Wall Street Journal reported on Sept. 13 that one of the principal beneficiaries of Facebook's practice was Donald Trump, DeSantis' own political mentor.

Nevertheless, the governor pointed in a letter sent Monday to Secretary of State Laurel Lee to the Journal's reporting that “this previously undisclosed double standard 'at times effectlvely grant[ed] incumbents in elections an advantage over challengers,'" especially in local races.

James Barragãn, The Texas Tribune
Texas lawmakers on Monday released their first draft of a new congressional map that would largely protect incumbents while reducing the number of districts in which Black and Hispanic residents make up the majority of eligible voters. The map reduces the number of districts dominated by people of color even though Texas gained two additional congressional seats and the population of Asian, Black and Hispanic Texans outpaced white Texans over the last decade.

Republicans constructed the map with incumbent protection in mind — a strategy that focused on bolstering vulnerable GOP seats rather than aggressively adding new seats that could flip from blue to red. However, the map does in fact strengthen Republican positioning overall in Texas, going from 22 to 25 districts that voted for Donald Trump in 2020. The number of congressional districts that voted for Joe Biden would shrink by one, from 14 to 13.

While many incumbents appear safe in these maps, others were drawn into districts that overlap with one another — for example, the proposed map pits Houston Republican Rep. Dan Crenshaw against Democrat Rep. Sylvia Garcia. It also pits two Houston Democrats — Reps. Al Green and Sheila Jackson Lee — against each other.