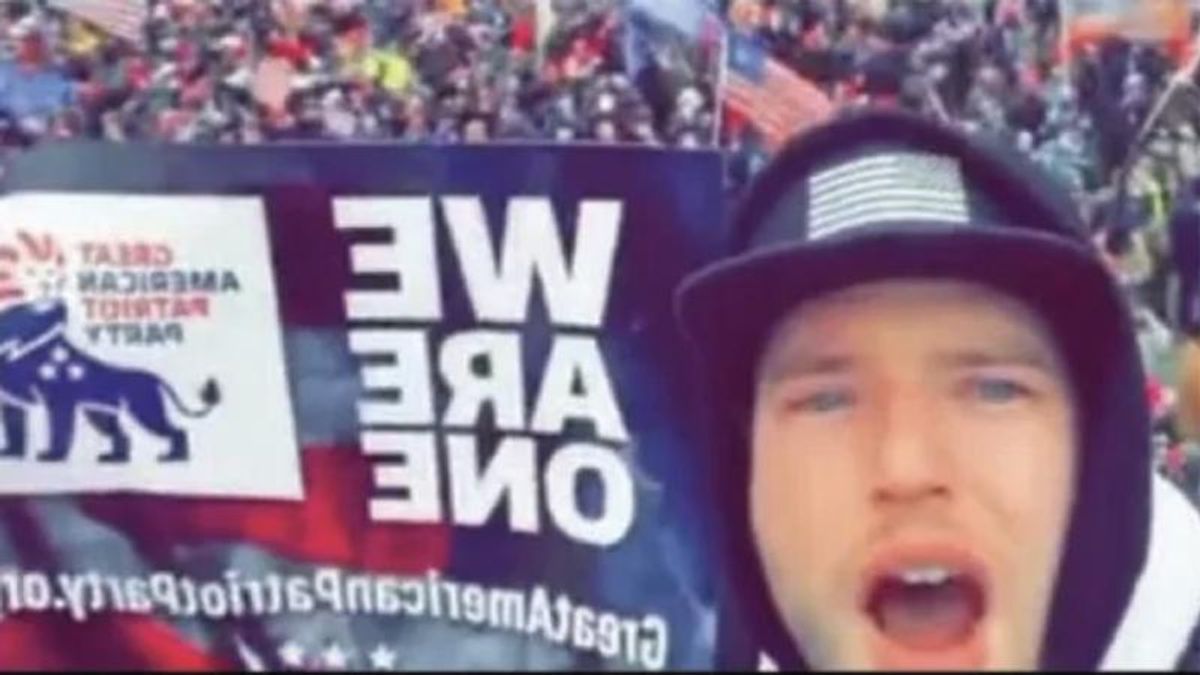 Photo via the Department of Justice

Trevor Brown was arrested by the FBI Thursday -- almost six months after he was booked and released without charges -- in connection with the January 6 Capitol riot.

Brown, 29, of the Detroit suburb of Novi, MI, was unbowed on Facebook one day after carrying a bullhorn in the middle of the riot, getting handcuffed and processed for arrest at the police station, only to be set free uncharged.

Here's what Brown posted on Facebook in the early morning hours of January 7:

"This has nothing to do with Trump or Biden. People should be storming that Brothel we call the Capitol everyday for what goes on in there. It's a Brothel and they sell you out everyday. Everyday. And putting any sort of credibility on anything those whores do in the full Congress is just stupidity. And that is the fault of the leadership on both sides.

"We should have cleaned that brothel out a long time ago. Today people are doing the right thing for those wrong reasons. It needs to get stormed every time they sell us out to some industry.

"Hopefully this is a trend that WILL start to bring change in there. They should know people won't sit still for their whoring and selling us all down the river. Today th[e]se elitist creeps are getting the same thing we live with everyday, fear for their own safety. The whole whore house needs to be cleaned out."

"We the people need one more solid rally like this and CONgress will be forced to bow and be thrown out for not representing the will of the people and charged with crimes against humanity. I want to call in for unity with any and all groups."

That was consistent with his philosophy, such that it is, as expressed in December posts reported in the FBI criminal complaint against him.

"This whole election has been the biggest s*** show in the world," one post read.

"The only path to normalcy is over throwing (sic) the dictators," he wrote in another post. "We compiled (sic) with the shutdowns. now its masks, now its vaccines. it won't stop. they are manipulating."

During the January 6 riot, the FBI says Brown "is seen shouting into the bullhorn as the crowd continues to push into the tunnel and assault the police officers." It states that he also signaled for and received a police hand shield that was held up to assist rioters who had been hanging from a balcony.

Curiously enough, here's what the FBI states happened to Brown roughly nine hours before he held forth about brothels on Facebook:

"As the assaults on the MPD officers increase in intensity, Brown continues to make his way further into the entrance. At approximately 4:11 p.m., officers apprehended Brown, placed him in zip-tie handcuffs, escorted him through the Capitol building into a police vehicle, and transported him to a police station to process his arrest. During processing, Brown confirmed his identity as Trevor Brown from Novi, Michigan. Brown was released later that evening without any charges filed."

Brown now faces charges of violent entry to the Capitol, disorderly conduct and obstruction of law enforcement during civil disorder.

You can the full FBI criminal complaint here.