The Conversation
The 4 million inhabitants of five U.S. territories – Puerto Rico, American Samoa, Northern Marianas Islands, Guam and the U.S. Virgin Islands – do not have the full protection of the Constitution, because of a series of Supreme Court cases dating back to 1901 that are based on archaic, often racist language and reasoning.

A call from Supreme Court Justice Neil Gorsuch to overturn more than a century of precedent has been joined by advocates for equal citizenship for everyone born in those U.S. territories. If the court decides to take up the question, it would review a long-standing status quo.

Now, no U.S. citizen living in any of those places can vote for president. They don’t have a voting representative in Congress, either.

But this inferiority is inconsistent. Puerto Ricans are American citizens and can vote in federal elections if they reside in a U.S. state, but not if they live in Puerto Rico or one of the other territories.

However, American Samoans are not U.S. citizens, so they can’t vote for president even if they live in the 50 states. That is being challenged in federal courts.

It’s all a result of a political and legal mindset that is more than 100 years old, but is still in force.

Up until the end of the 19th century, everyone assumed that all U.S. territories would, eventually, become full-fledged states, whose residents would become U.S. citizens with rights fully protected by the Constitution. The Northwest Ordinance of 1787 outlined the process: As new lands opened to Americans, Congress would initially appoint a governor and judges for the territory and establish a rule of law. When the territorial population exceeded 5,000 adult men, voters would elect a legislature and send a nonvoting delegate to Congress. When the territory reached a population of 60,000, the territory would petition for statehood and be admitted to the union.

That process assumed the territories would be in North America and that most of the territorial population would be people of European descent. Those assumptions changed when the United States claimed Puerto Rico, the Philippines and Guam in 1898 as spoils of war at the end of the Spanish-American War. Puerto Rico and Guam are still U.S. territories.

That expansion gave Americans a clear sense of the nation’s purpose and power in the world, summarized effectively by U.S. Sen. Albert Beveridge of Indiana in a congressional speech on Jan. 9, 1900: “[God] has made us the master organizers of the world to establish system where chaos reigns. He has made us adept in government that we may administer government among the savage and servile peoples.”

A new type of territory

Starting in 1901, a set of court cases, collectively called the “Insular Cases,” created new constitutional law regarding the United States’ relation with its territories. They began when import companies challenged tariffs imposed on goods transported from the newly acquired territories into the U.S. The companies claimed there should not be tariffs, because the goods were moving from one part of the U.S. to another.

The Supreme Court ultimately ruled that the companies were correct, that transport within the U.S. was not subject to tariffs, but created an exception in which the new lands were neither foreign countries nor part of the U.S.

Those territories, the Supreme Court would rule in the first of the Insular Cases, Downes v. Bidwell in 1901, were “foreign in a domestic sense,” “inhabited by alien races,” and therefore governing them “according to Anglo-Saxon principles may for a time be impossible.”

The ruling included other prejudice-revealing statements, too, such as, “It is obvious that in the annexation of outlying and distant possessions grave questions will arise from differences of race, habits, laws, and customs of the people, and from differences of soil, climate, and production, which may require action on the part of Congress that would be quite unnecessary in the annexation of contiguous territory inhabited only by people of the same race, or by scattered bodies of native Indians.”

A 2020 referendum vote in Puerto Rico favored statehood; Guam officials have called for statehood; and Stacey Plaskett, who represents the people of the U.S. Virgin Islands in Congress, says her constituents deserve the full rights of citizenship, including the right to vote.

The cases and context

Both at the time and since, the Downes decision has been described as meaning “the Constitution does not follow the flag.” The territories might be ruled by Congress, but not necessarily by the Constitution.

What that meant for the people of those territories was unclear. And despite five other cases in 1901, and others in the subsequent 20 years, the Supreme Court has never truly clarified which constitutional protections were available to whom and which weren’t. It left open questions about whether key elements of the Constitution, like trial by jury, or even the Bill of Rights, were available in the unincorporated territories.

Hawaii was also acquired in 1898, but was treated differently and ultimately became a state. The differences were probably for reasons to do with partisan politics and a Republican-Democratic balance in Congress. 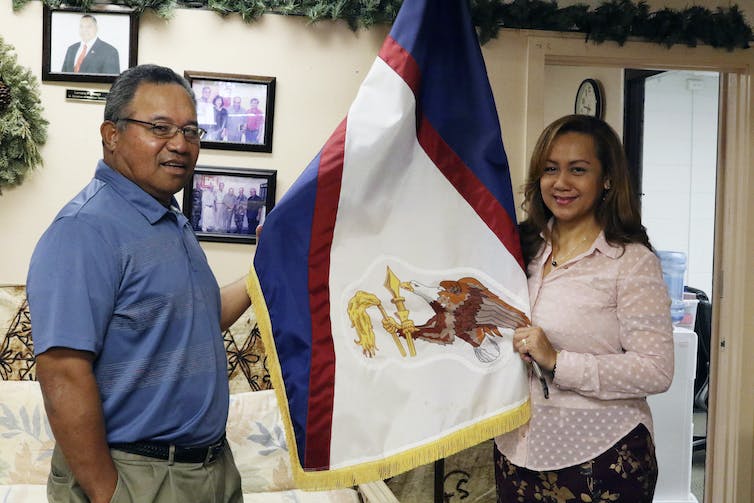 Two people from American Samoa who work for the territory’s government made different choices about U.S. citizenship. Filipo Ilaoa, at left, became a citizen; Bonnelley Pa'uulu remains a U.S. national without full citizenship rights and privileges.

Supreme Court interpretation over the years

Since the mid-20th century, the court has made incremental changes to the Insular Cases’ effects, tweaking technical definitions concerning taxes, trade and governmental benefits such as Social Security, Medicaid and the Supplemental Nutrition Assistance Program. But the court has not addressed the overall inferior constitutional status of the territories and the people who live there.

It wasn’t until 1957, for instance, in Reid v. Covert, that the Supreme Court ruled that defendants in the territories had a right to trial by jury – a right that citizens have because of Article III of the Constitution. Several justices made clear that “neither the cases nor their reasoning should be given any further expansion.” That statement was widely viewed as a signal that the influence of the Insular Cases was declining.

In Torres v. Puerto Rico (1979), the court further weakened the Insular Cases. Although narrowly applied to the territory at hand, the Supreme Court made clear that the Bill of Rights actually did apply in a U.S. territory.

In its 2008 ruling in Boumediene v. Bush, the court held that detainees at the U.S. naval base in Guantánamo Bay, Cuba, had the constitutional right of habeas corpus to challenge the validity of their detention. Justice Anthony Kennedy’s opinion said, “It may well be that over time the ties between the United States and any of its territories strengthen in ways that are of constitutional significance,” and said the federal government did not “have the power to switch the Constitution on or off at will.”

But in its 2020 ruling in Financial Oversight and Management Board for Puerto Rico v. Aurelius Investment, the court pulled back from its trend of extending constitutional protections to the unincorporated territories. It ruled that President Barack Obama’s appointments to the board, a government body focused on helping Puerto Rico return to financial stability, were local officials, not “officers of the United States,” and therefore did not require Senate confirmation. 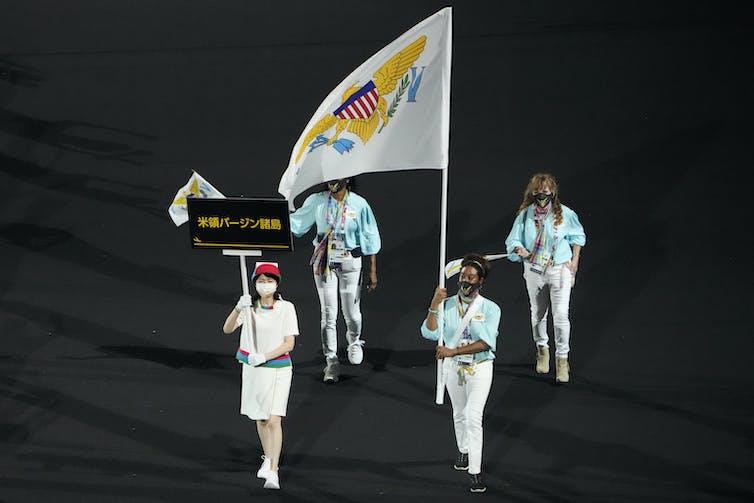 Athletes from the U.S. Virgin Islands arrive at the Paralympics in Tokyo in August 2021.

Many legal scholars view the court’s mention of U.S. territorial connections strengthening “over time” as a possible key to overturning the Insular Cases. The original distinctions assumed that the U.S. would “govern temporarily territories with wholly dissimilar traditions and institutions.” Most acknowledge those perceived distinctions clearly no longer exist.

These territories have established institutions and principles grounded in American traditions. The internal governments of these territories have established laws, governmental institutions and legal traditions that are indistinguishable from any state in the union. They hold elections, have residents serving in the U.S. military, and play a role in building the nation.

But without equal voting rights and congressional representation, the Americans living in these territories cannot remedy their status at the ballot box.

Editor’s note: This is an updated version of an article originally published Oct. 5, 2021.