Former Trump administration acting Homeland Security Secretary Chad Wolf modified and delayed an intelligence report detailing interference in the 2020 election by Russia, according to the Office of the Inspector General (OIG) at DHS.

"We found that DHS did not adequately follow its internal processes and comply with applicable [intelligence community] policy standards and requirements when editing and disseminating an I&A intelligence product regarding Russian interference with the 2020 U.S. Presidential election," the report found. ""The acting secretary participated in the review process multiple times despite lacking any formal role in reviewing the product, resulting in the delay of its dissemination on at least one occasion. The delays and deviation from I&A [Office of Intelligence and Analysis] standard process and requirements put [them] at risk of creating a perception of politicization."

The report noted I&A agreed with the watchdog's analysis.

"The delays and deviation from I&A’s standard process and requirements put I&A at risk of creating a perception of politicization. This conclusion is supported by I&A’s own tradecraft assessment, which determined that the product might be viewed as politicized," the report found. "The Acting Secretary’s involvement in I&A’s process caused a delay in the product’s release and potentially furthered the perception of politicization surrounding the product."

IN OTHER NEWS: Donald Trump derided Melania’s looks during meeting with GOP strategists

The initial intelligence assessment was supposed to be released on July 9, 2020, but it was delayed at the behest of Wolf's chief of staff.

According to a whistleblower, identified as Brian Murphy by CBS News, Wolf said the document "made the president look bad."

"Wolf resigned his post in January 2021, after the Government Accountability Office and several federal judges deemed that he had served illegally, a judgment that he disputes," CBS reported. "In March 2021, the Office of the Director of National Intelligence released a report on the 2020 elections that found Kremlin-backed agents authorized by President Vladimir Putin tried to use President Trump's inner circle and right-leaning media to undermine his opponent."

Murphy, the whistleblower, was interviewed by CBS in October 2021.

WATCH: Republican grills legal expert over Supreme Court’s integrity -- and she throws GOP’s antics back in his face

"Russian disinformation was something [DHS leadership] didn't want to report on. It mattered. It had a material impact on life and safety of how the events unfolded during 2018 and forward," he argued. "Wolf told me that the plan with respect to the administration was to downplay Russian disinformation, that was supporting the Democrats… and instead, upscale the threat from China. That's where the real manipulation by the politicals came into effect." 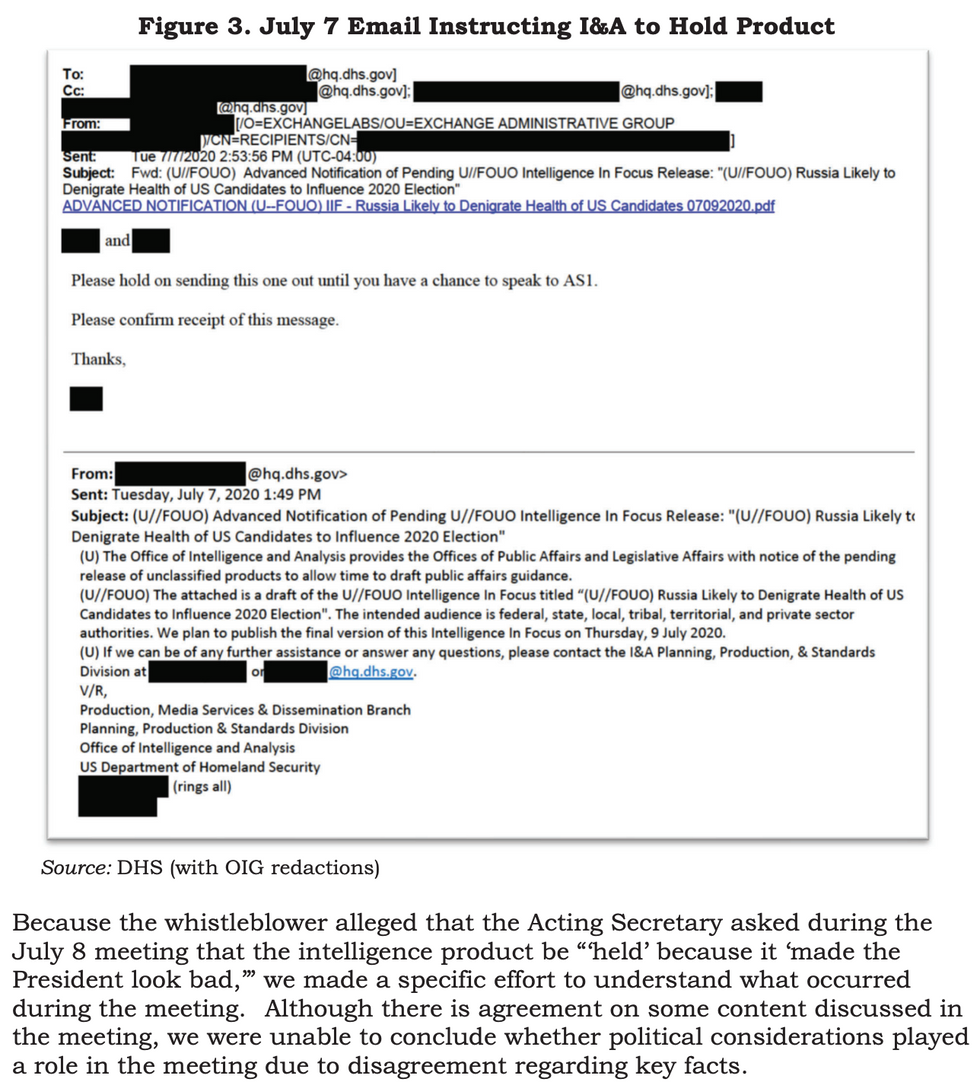