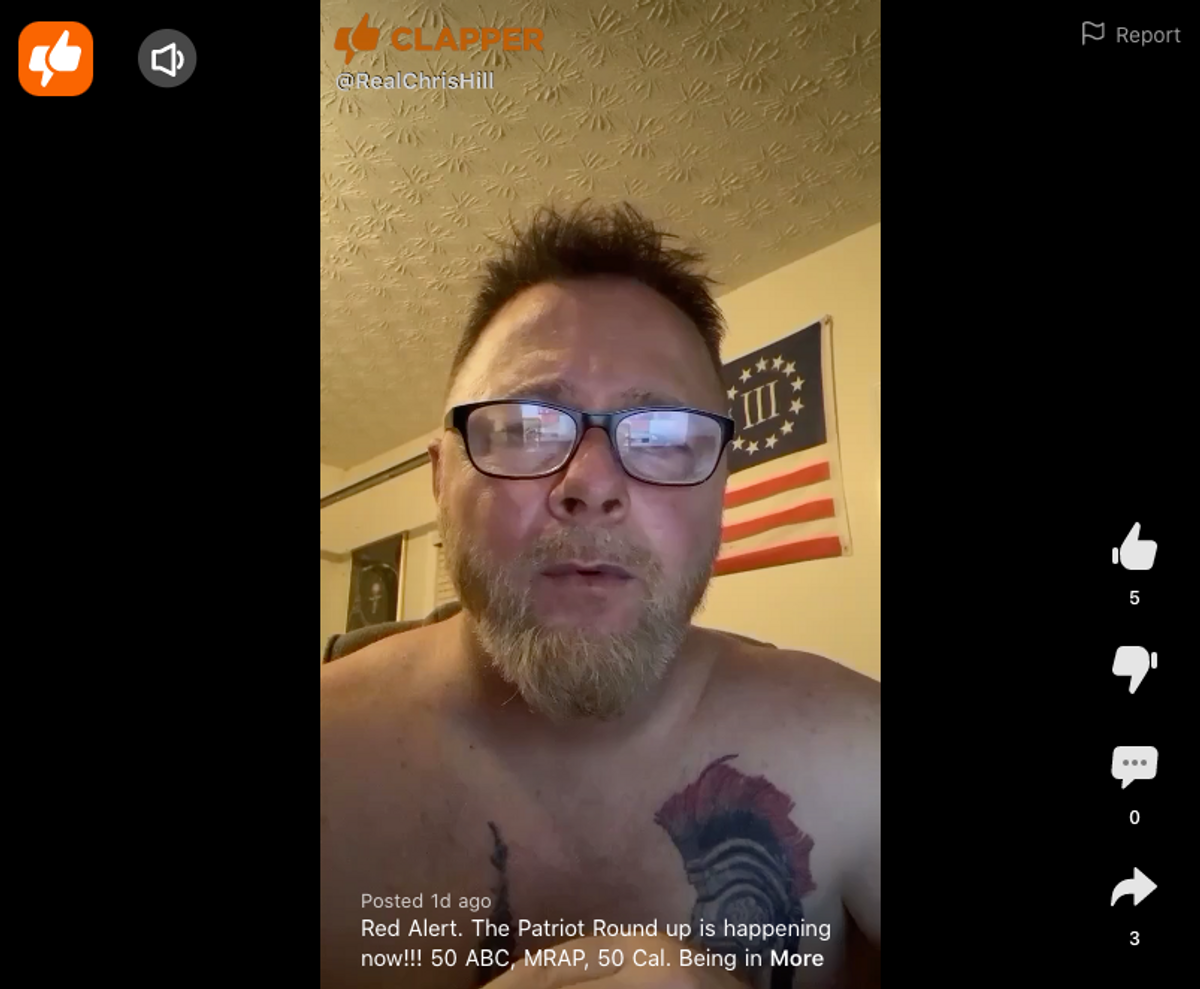 Federal investigators appear to be looking into a communications channel used by III Percenter militia extremists that was used to coordinate ground operations at the US Capitol on Jan. 6.

Dozens of federal agents raided the Georgia home of members of the III% Security Force on Wednesday, militia leader Chris Hill claimed in a video posted on the social media app Clapper.

Hill said the two members, whom he identified as "Honey Badger" and "Liberty Or Death," were present in Washington DC on Jan. 6. The anonymous Twitter account Antifascists Atlanta has identified "Honey Badger" and "Liberty Or Death, but Raw Story has not confirmed their identities. Hill said federal agents told the couple that the basis for the raid was information that "they were on a channel that was listening for any antifa aggression."

The militia indicated that federal agents seized the couple's property during the raid on Wednesday.

"I have a red alert that I need to put on blast," Hill — who goes by the nom de guerre "General Blood Agent" — said in the Clapper video. "The roundup has begun. The police state has begun."

A notification prominently placed on the III% Security Force website conveys the same hyperbolic message: "Red Alert. The Patriot Act is in effect. Honey Badger and Liberty or Death were raided for being in DC on Jan. 6th. Property taken. The sealed indictments are for us all. Nobody can hire an attorney to fight no fly lists and a bullshit domestic terrorist charge together. The patriot roundup has begun. This is a police state, over."

Hampton Stall, a researcher who monitors militia groups, describes III% Security Force as "one of the most threat-heavy militia groups I've encountered." In the fractious universe of the Three Percenter movement — so named based on the false historical claim that only 3 percent of American colonists resisted British subjugation — III% Security Force is regarded as particularly extreme, with many rival groups distancing themselves.

Alex Michael Ramos, who at one time appeared in a group photo with the III% Security Force members, was sentenced to six years in prison for his role in beating a Black man in a parking garage during the 2017 Unite the Right rally in Charlottesville, Va. And three men from a breakaway faction of the Kansas Security Force, which in turn reported to Hill, were sentenced to 26 to 30 years for plotting to blow up an apartment building that housed Somali refugees.

An "About" section on the III% Security Force website spells out the anti-government group's pseudo-legal basis for violence that uses militaristic jargon: "Defensive posture shall be taken up in the optimal tactical position in relation to the people or property in need of such defense…. All laws in violation of the US and subject States Constitution are hereby considered null and void, the enforcement of which most likely represents the need for such defense as herein outlined.

"As the nature of the quick reaction force is understood, a defensive posture will be taken up in the shortest amount of time possible for the allocation of the necessary defensive resources to the location determined," the missive continues. "Minimum force size will be determined by the leadership of the coalition."