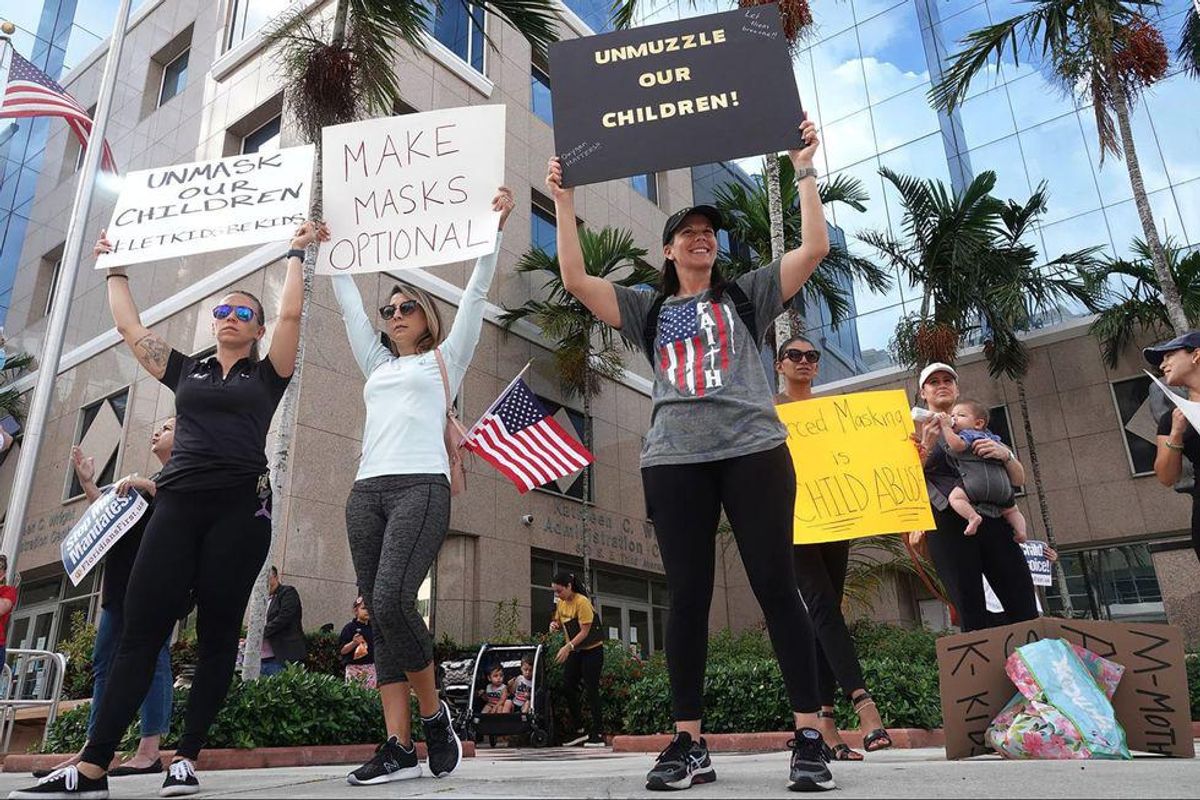 People who oppose mandatory masks in schools protest at the Broward County School District headquarters in Fort Lauderdale, Fla., on May 18, 2021. - Joe Cavaretta/TNS

On Tuesday, writing for NBC News, Faith and Progressive Policy Initiative fellow Guthrie Graves-Fitzsimmons tore into right-wing Christian activists and groups who have tried to cast masks as un-Biblical to serve their political interests.

"Are mask mandates a form of Christian persecution? That's the argument a California man is making after his two teens were sent home for violating their high school's mask policy," wrote Graves-Fitzsimmons. The man, whose kids have been banned from campus, claims that "The Bible says we're made in the image of God and Satan tries to cover that up. A mask is a sign of oppression."

"These claims are laughable," wrote Graves-Fitzsimmons. "Nothing in the Bible says you can't wear masks. And you don't see anti-masker Christians arguing against wearing clothing or hats or sunglasses. When these conservative Christians start mandating nudity, then they might have a claim about not covering up what God has created." That being said, he noted, a growing number of right-wing Christians are making similar arguments around the country.

Anti-maskers have used a number of arguments to justify their opposition to masks in schools. One man in Fort Myers, Florida, even told the school board they are abetting child trafficking if they require masks because "you can't identify any of them."

It's worth noting, wrote Graves-Fitzsimmons, that these Biblical anti-mask arguments aren't coming from religious leaders: "No major religious groups in the U.S. are telling people not to get vaccinated or wear masks." Rather, it's because "Evangelical Christians report some of the highest rates of vaccine hesitancy of any major religious group. And this is closely connected to their allegiance to former President Donald Trump and the GOP."

"Instead of trying to use religion to avoid a commonsense scientific solution to a deadly pandemic, I hope religious Americans (and nonreligious Americans) can instead focus on how we can protect one another and save lives," concluded Graves-Fitzsimmons. "Because the Bible does have a lot to say about that."