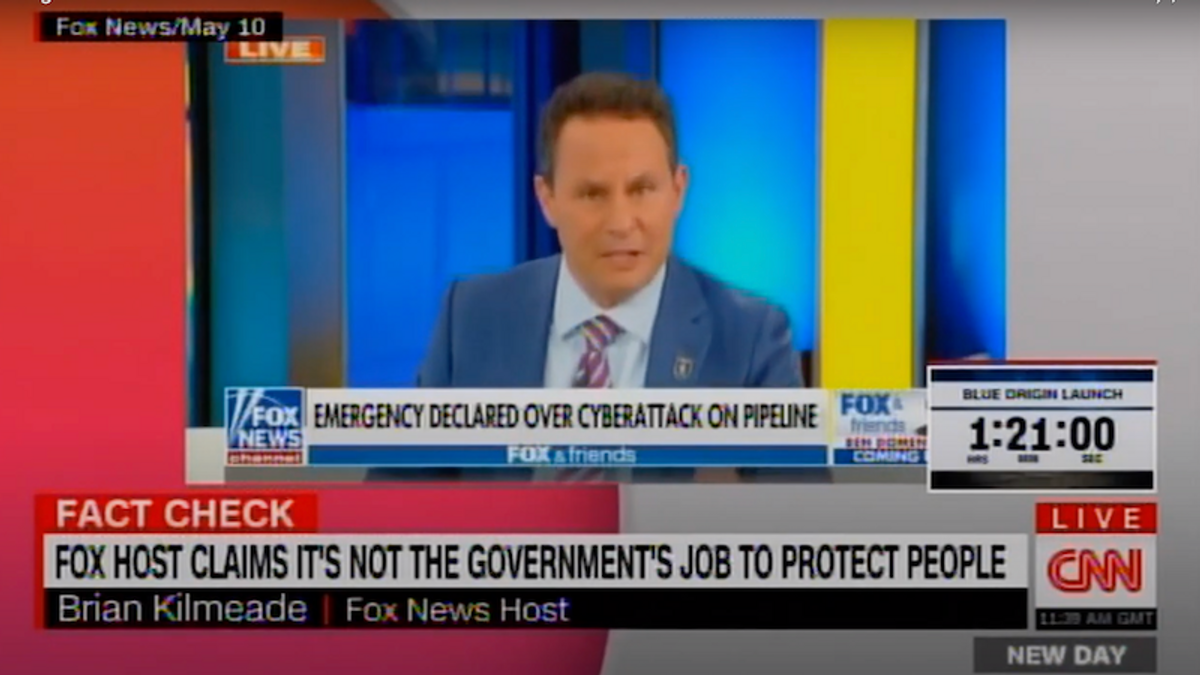 CNN hosts Brianna Keilar and John Avlon tore into their Fox News counterpart Brian Kilmeade on Tuesday morning, in response to a segment Monday in which he defended people's personal "choice" to not get vaccinated or follow mask mandates — or even to die — and claimed it's not the government's job to protect people.

"If you didn't get a vaccination, that's your choice, and if you did like I did ... then you should not wear a mask," Kilmeade said in the segment. "If you want to go cliff-diving this weekend, you don't have to check with me. It seems a little dangerous but I'm not going to judge you."

When co-host Steve Doocy pointed out that 99 percent of people who are dying from COVID are unvaccinated, Kilmeade responded, "That's their choice."

Then, after Doocy explained that mask mandates are designed to protect people from those are unvaccinated, Kilmeade said, "That's not their (the government's) job. It's not their job to protect anybody."

Avlon and Keilar then pointed to the many ways in which government protects people daily — from regulations on food, medicine, health and travel, to firefighters and EMTs.

The CNN co-hosts proceeded to play a supercut of instances in which Kilmeade has literally praised the government for protecting people, such as by arming teachers, retaliating against Russia for cyberattacks, and sending troops to the Mexico border.

"The problem is that his cliff-diving metaphor doesn't really apply here, because being reckless with your health in a pandemic can directly affect the health of others. It's that old idea that my right to swing my fist ends at your nose," Avlon said.

Keilar added: "People who can get vaccinated but choose not to can impact someone who doesn't have the choice of getting vaccinated, like someone under 12 who is immunosuppressed and goes to school this fall in one of the states or school districts where officials are banned from requiring mask use. Or someone who can get vaccinated but chooses not to because they believe the BS that Kilmeade's colleagues dish out nightly, or someone who is vaccinated but still immunocompromised who must rely on their fellow citizens to do the right thing, to be personally responsible for other people, not just themselves."

"What a concept," Avlon responded.