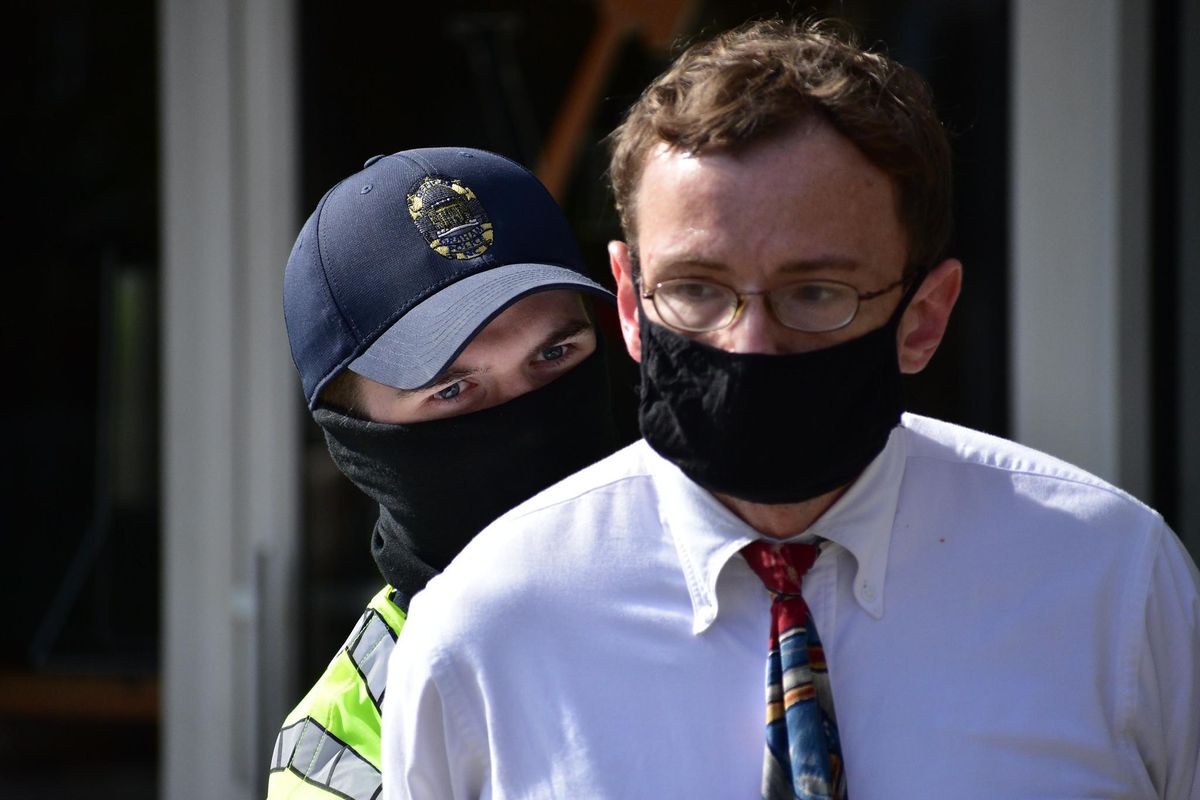 A North Carolina prosecutor has dismissed a charge against reporter who was arrested while covering a march to the polls that was disrupted when police began pepper-spraying a crowd during the final day of early voting last October.

Murawski was the second person arrested during the Oct. 31 "I Am Change Legacy March to the Polls." Soon after marchers knelt in the street for nine minutes and 29 seconds to honor George Floyd in front of a Confederate monument in Graham, police ordered people out of the street and began deploying pepper fogger. Graham police officers and Alamance County sheriff's deputies made more than 20 arrests in a chaotic scene that saw children vomiting from exposure to pepper fogger and a woman experience a seizure and fall out of a motorized wheelchair.

Video of Murawski's arrest published by Triad City Beat shows two officers grabbing him while he was standing in the street near a crosswalk attempting to take photographs. One officer can be seen twisting Murawski's wrist after another officer takes possession of his camera. Then, two officers lead Murawski across the street and lift his arms behind his back beyond a 90-degree angle.

"We would have liked an explanation or apology for the way our reporter was treated, but I guess we're at least grateful the charges were, finally, dismissed," Boney said in a statement issued on the newspaper's Facebook page.

Murawski had been scheduled to go to trial on Wednesday. The Alamance County District Attorney's office had continued to pursue a conviction even after a judge dismissed the exact same charge against William Traynor, the first person arrested during the disrupted Oct. 31 march, under almost exactly the same circumstances.

Murawski's dismissal brings the number of US journalists with pending charges from covering protests down to seven, according to a list maintained by US Press Freedom Tracker, a project led by the Freedom of the Press Association and Committee to Project Journalists, in collaboration with other press freedom groups. The groups reported that 2020 saw an unprecedented number of journalists assaulted, arrested or otherwise impeded from reporting. The number of journalists arrested in the United States leaped from nine in 2019 to 131 in 2020. The vast majority — 119 out of 131 — were arrested while covering Black Lives Matter protests.

The six reporters with pending charges from last year are all freelancers or independent journalists ranging from antifascists sympathetic to the Black Lives Matter protesters to documentarians supplying material for conservative outlets.

Those who are still facing charges include:

• Fiorella Isabel Mayorca and Jonathan Mayorca, a sister-and-brother team who co-own The Convo Couch video news outlet, were detained when police kettled a Black Lives Matter protest in Los Angeles on May 30. Fiorella Mayorca told US Press Freedom Tracker that she was wearing a press badge and that she and her brother told police that they were press, but they were ignored. They were charged with failure to obey a lawful order.

• Ronald Weaver II, an independent filmmaker who has sold footage to NBC and the Daily Mail, was arrested and charged with disorderly conduct while filming a protest against immigration policy and ICE in New York City on Sept. 19. While filming an arrest, Weaver told US Press Freedom Tracker that an officer in riot gear shoved him I the back.

"It was obvious that they were targeting me because of what I was filming," he said.

• Blair Nelson, a freelance journalist who has reported conservative outlets Campus reform and The RF Angle, was cited for violating an emergency order while covering a car caravan to protest the police killing of a Black teenager in Wauwatosa, Wis. on Oct. 8. Nelson had been riding in a car with two reporters from the conservative Daily Caller website and independent journalist Brendan Gutenschwager. The journalists got out of their car when they saw police making arrests. The police "swarmed" the reporters, Nelson said, and a National Guardsman confiscated his phone, but later returned it.

• Freelancer Veronica Coit was arrested while covering a demonstration to protest police brutality in Asheville, NC on Aug. 9 when they were arrested. Coit said they were following the protest in a car because of a medical condition that makes it difficult to walk.

"There was a large crowd in front of me, parked cars on the street, and other cars beside me too," Coit wrote in an account of the arrest. "I couldn't go anywhere at that moment. I was moving, but slowly. The next thing I see is a cop at my passenger door, ripping it open with no warning. Coit faces charges of fail to disperse on command and impeding the steady flow of traffic, and their next court date is scheduled for Aug. 3.

• Freelance photojournalist Clementson Supriyadi was assaulted and arrested by Oregon State Police during a protest in Portland on Nov. 5. He is charged with disorderly conduct and interfering with a peace officer.

Boney said he believes the police in Graham should have known that Murawski was a reporter when they arrested him.

"He was taking pictures of the first guy arrested — Traynor," Boney said. "He hears them talking to people, and thinks they're talking to someone else, and a hand comes out and arrests him. It would seem obvious that he's a reporter. He has camera equipment… a Nikon or something like that, and a camera bag."

Murawski's style of dress also set him apart from both the Black Lives Matter protesters and neo-Confederates who regularly come out to counter-protest.

"He's a reporter," Boney said. "Who else comes to a Saturday rally with a white shirt and tie? He's not a run-of-the-mill person who tags along with these groups and takes pictures."

Alamance News is notable among the publications that covered protests in Graham for the fact that it's a conservative outlet. Following the Oct. 31 debacle, the march leader announced a boycott against the newspaper's advertisers, accusing Alamance News of portraying Black protesters in a negative light.

Boney worked as an aide to the late Sen. Jesse Helms, an ultra-conservative who supported segregation, for 12 years before returning to Alamance County to take over the newspaper founded by his parents. Boney said he rejects the characterization of his newspaper as conservative.

Murawski's arrest did not cause Boney to reevaluate his view of law enforcement in Alamance County so much as a personal experience. Boney attempted to cover a hearing for a white woman who was accused of vehicular assault against two girls, one who Black and the other Latinx, in December. The mother of one of the girls is a racial justice activist who was also arrested on Oct. 31. At the order of the presiding judge, Boney was detained in the courtroom and then forcibly removed by a police officer, but not charged.

"They were unnecessarily harsh," Boney said. "I said so in the editorial. If, in fact, that's the way some of these protesters have been handled, our evaluations and high regard for them would be subject to reevaluation. That was not reasonable, in my opinion."