"Outgoing California Congressman Devin Nunes can’t sue Twitter over mean social media posts, but he hasn’t stopped trying to bring two of his anonymous hecklers into court. Nunes, R-Tulare, is still attempting to sue the writers behind anonymous Twitter accounts that badger him under the fictional personas of a cow and his mother," the Fresno Bee reported Monday.

The newspaper noted Nunes' attorneys have continued to file briefs in the cases since his announcement he would resign from Congress to work as CEO of the Trump Media & Technology Group.

Nunes failed in civil court to force Twitter to reveal the people behind the @DevinCow and @NunesAlt.

RELATED: Devin Nunes' resignation reveals a depressing truth about the destruction of democracy

"The U.S. Justice Department under Trump issued a grand-jury subpoena to Twitter in November 2020 for 'all customer or subscriber account information' for the Twitter mom. The Justice Department also sought a gag order blocking Twitter from telling the account owner about the subpoena," the newspaper noted. "When Twitter’s attorneys moved to quash the subpoena, they wrote that the company was concerned the government was aiding Nunes’ legal efforts to attack and unmask his online critics."

Journalist Shawn Musgrave has sued the Department of Justice to turn over documents under the Freedom of Information Act.

Kel McClanahan, Musgrave's attorney, said, "democracy only works when the awesome power of the federal law enforcement apparatus can only be brought to bear on people who are suspected of federal crimes, and every deviation from that practice erodes the civil liberties of every American just a little bit more."

"If a senior member of Congress attempts to weaponize this capacity against his critics, that should be a problem for everyone, and transparency is vital to ensuring that such abuses of authority do not occur behind closed doors," he explained.

In the lawsuit, which was filed "with the permission of @DevinCow's owner," Musgrave wrote the point of the Freedom of Information Act request was "to ascertain the degree to which FBI and DOJ — with or without Cong. Nunes's involvement — have attempted to identify the anonymous owner of the @DevinCow Twitter account." 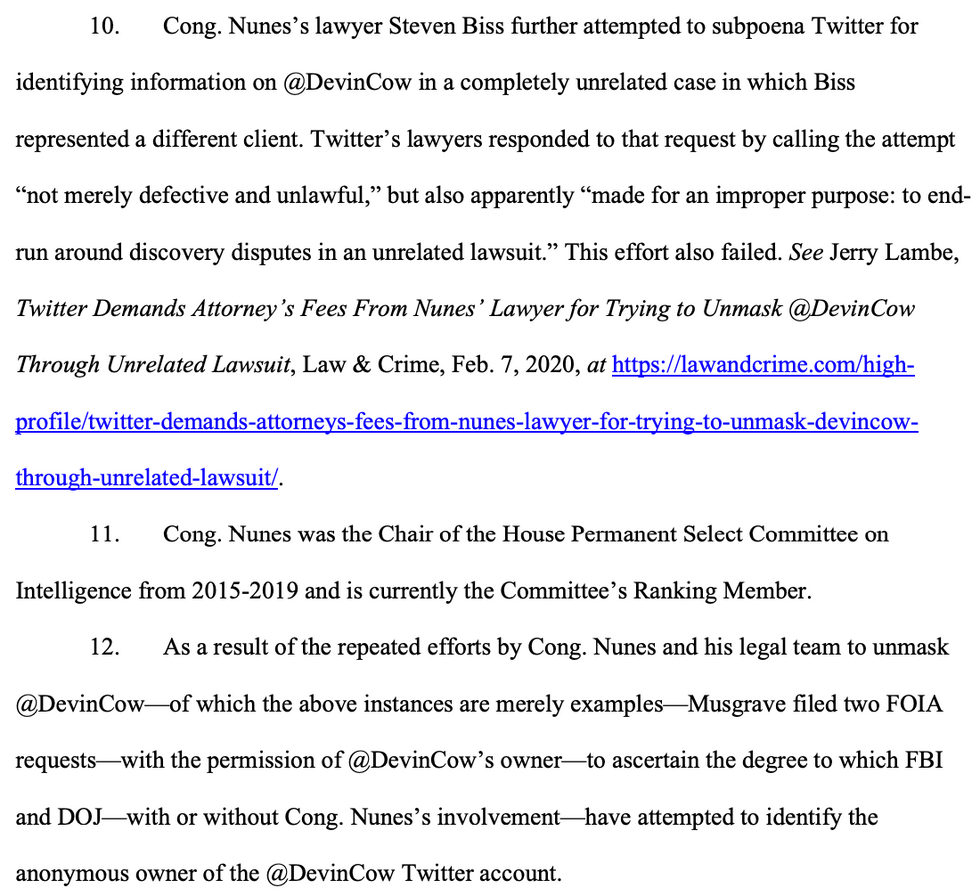