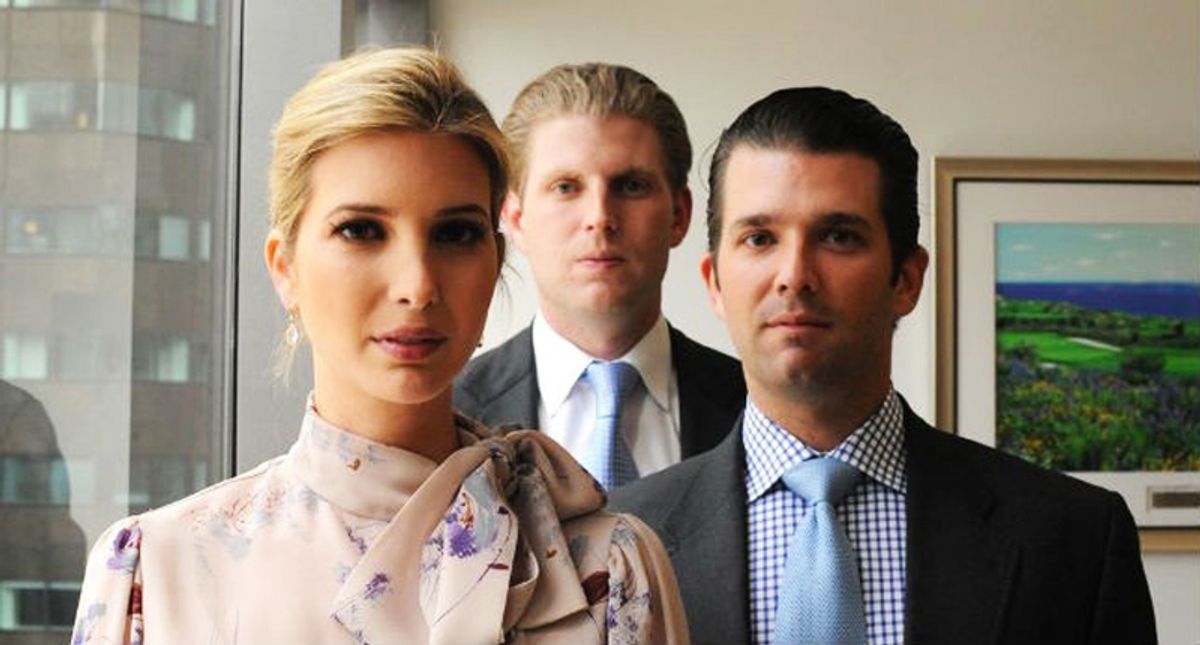 Former president Donald Trump's adult children have cost taxpayers more than $140,000 in travel expenses in the first month after their father left office, according to a government watchdog.

The twice-impeached one-term president extended Secret Service protection by six months for his family members, an unusual step taken in one of his last acts in office, and CREW obtained records that Ivanka Trump, Donald Trump Jr. and Eric Trump spent at least $52,296.75 on travel and $88,678.39 on hotels in the first 30 days after President Joe Biden's inauguration.

"If just one month of the Trump children's extended Secret Service protection cost $140,000, then the full six months could cost taxpayers nearly $1 million," read a statement from Citizens for Responsibility and Ethics in Washington. "Unfortunately, the records appear to not even be a complete accounting of the costs, since the Secret Service did not provide records of spending at Trump businesses, which is the most controversial aspect of the extended protection. While it may be tempting to put the story of the Trump family's profiteering in the past, we cannot until they have actually stopped directing taxpayer money into their own bank accounts."

"Thanks to Trump's unusual extension of their protection," CREW added, "they've got a few more months to continue the grift."

Ivanka Trump and her husband Jared Kushner left the White House for a 10-day vacation in Salt Lake City with their three children, which cost more than $62,000 in hotel stays for their Secret Service detail, and then went to Miami for a month, including a short stay at the family's Bedminster property, for which the Secret Service turned over no receipts.

Eric and Lara Trump spent most of February in New York at the family's Briarcliff property, but made brief trips to Queens, Miami and Palm Beach, which cost the Secret Service at least $12,742 but does not include receipts from Trump Organization properties.

Donald Trump Jr. spent time during that 30-day period in New York City, Long Island and Upstate New York, and also visited Palm Beach while his younger brother was there, and his travel cost at least $13,337 -- not including stays at family-owned properties.