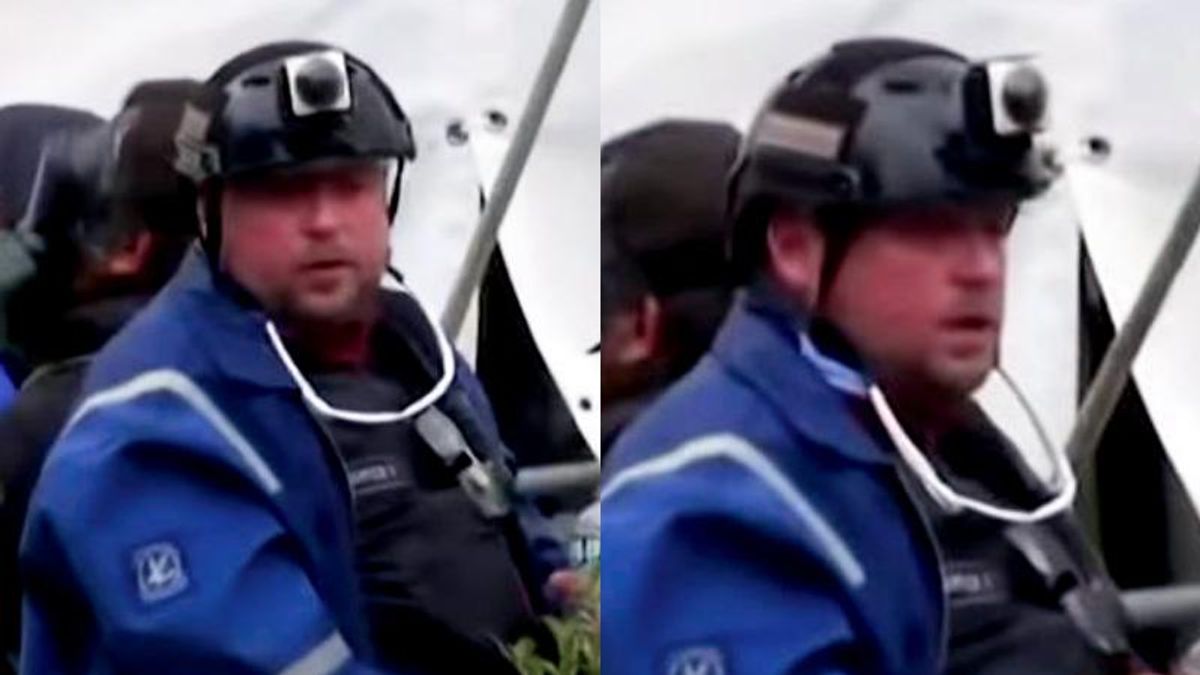 Three Percenter Guy Wesley Reffitt had an emotional two-hour hearing Monday -- with family members on the line -- over his request to be released pending trial for his part in the January 6 Capitol riot.

Reffitt, from Wylie, TX, had gotten his 15 minutes of infamy for having been turned in to the FBI by his 18-year-old son, Jackson Reffitt. The son and his 16-year-old sister had been threatened by their father if they went to authorities.

Adding insult to injury for Reffitt at the hearing Monday were these words from his daughter about his threats having not been worrisome to her. Here's how it was reported by Dallas' CBS 11 TV station:

""He's not a violent person. He just says things. He talks a lot. … That's just him being a drama queen," she said at the hearing. "I wasn't in fear, I guess. It was annoying in a way." The daughter also had testified about her father to a grand jury, according to Monday's proceedings.

The news account also indicated that her brother was no longer at home:

"Reffitt's son, Jackson Reffitt, turned in his father to the FBI. The son has since left the family's home, essentially disappearing and living in what the Justice Department calls an undisclosed location. His sister said in court on Monday that her father and brother had long had a strained relationship because of political tension."

The family drama was noted by Faruqui, but it didn't change the judge's opinion about keeping Reffitt in jail until trial.

"My heart is broken. I see people in your family suffering. I see an American family suffering," Faruqui said. ""[It] isn't an easy thing to say, but I think it's what the law requires in this case. … It's clearly caused a tremendous burden to your family,"

CBS 11 reported, "The judge's decision elicited a wail from the family household on the court's conference call line. Reffitt's wife, daughter and daughter's boyfriend had gathered for the hearing on the line, with the daughter's boyfriend also having testified in court Monday."

Prosecutors had cited the family's testimony to argue that Reffitt words should not be taken as a serious threat. But there was this:

"In the days after the attack, Guy Reffitt was taped speaking inside his home, and prosecutors now have the audio recordings, according to court filings. At home, Reffitt talked about video he had taken on January 6, bragged about and defended his part in the riot, and called it "a preface" as he pledged that he wasn't done.

"The judge said he believed Reffitt still could be a danger to the community, especially because of the firearms he kept, his statements about future violence and additional messages he sent to other Trump supporters who backed a revolt against American governance. Faruqui also noted a silencer Reffitt owned for a gun, which was found in his home.

"When Reffitt and the other Three Percenter had driven to Washington in early January, he had brought with him an AR-15 rifle and a pistol, prosecutors said. Prosecutors say Reffitt, clad in body armor, carried the pistol and plastic cuff restraints as he advanced on a police line protecting the Capitol. When investigators later searched his house and found his weapons, Reffitt at first told them the gun silencer he had was a "fuel filter."

"Reffitt had also sent messages in advance about "marching with heat," and after the riot messaged others about shifting his target toward the mainstream media and technology companies, according to the Justice Department's court filings.

"He also allegedly wrote to other Three Percenters, prosecutors say, over a messaging app about taking the Capitol "again."