With the indictment of Enrique Tarrio, the government has laid out the case that the Proud Boys utilized a command structure to mobilize members to take part in the Jan. 6 assault on the US Capitol, while dropping tantalizing hints about connections between the nationalist street brawling group and other potential actors in the conspiracy to prevent Congress’ certification of Joe Biden’s election as president of the United States.

The new superseding indictment -- which also includes defendants Joe Biggs, Ethan Nordean, Charles Donohoe, Zach Rehl and Dominic Pezzola — already charged in two previous indictments — notes that on Dec. 19, 2020, President Trump announced a protest to coincide with Congress’ certification of the electoral college vote via tweet: “Big protest in DC on January 6th. Be there, will be wild!”

The following day, according to the indictment, Tarrio created a new chapter called “Ministry of Self Defense,” or MOSD, which he described as a “national rally planning” chapter that would include only “hand selected” members. On the same day, Tarrio allegedly created an encrypted message group called “MOSD Leaders Group,” which included Biggs, Nordean, Rehl, Donohoe and three other unidentified members. Pezzola was added to a separate MOSD Members Group by an unindicted conspirator identified as “Person-1,” according to the government.

IN OTHER NEWS: Trump is ‘Putin’s No. 1 American apologist’ — and Republicans cheer him anyway: analysis

“Person-1” is described in the indictment as suffering a “knife wound” during an altercation in Washington, DC on Dec. 12. Those circumstances are consistent with Jeremy Bertino, a Proud Boy who marketed the “RWDS” patch — short for “Right Wing Death Squads” — and was frequently at Tarrio’s side, including during a January 2020 Second Amendment rally in Richmond, Va. and at a Million MAGA March in DC on Nov. 14, 2020.

Pointing towards coordination between Tarrio and other actors in the attempted insurrection, the indictment alleges that Tarrio communicated “with an individual whose identity is known to the grand jury” on Dec. 30 and Dec. 31. According to the indictment, the unidentified individual sent a nine-page document entitled “1776 Returns” to Tarrio that “set forth a plan to occupy a few ‘crucial buildings’ in Washington, DC on January 6, including House and Senate office buildings around the Capitol, with as ‘many people as possible’ to ‘show our politicians We the People are in charge.’”

The indictment quotes the sender of the document as saying, “The revolution is more important than anything.”

Tarrio’s response, quoted in the indictment, suggests he shared the same sentiment: “That’s what every waking moment consists of…. I’m not playing games.”

The indictment alleges that Proud Boys leaders settled on a plan of specifically targeting the US Capitol as early as Jan. 3, quoting an unindicted conspirator identified only as “Person-3.”

“I mean the main operating theater should be out in front of the house of representatives,” the unidentified Proud Boys leader allegedly said in a voice note posted to the MOSD Leaders Group chat. “It should be out in front of the Capitol building. That’s where the vote is taking place and all of the objections. So, we can ignore the rest of these stages and all that shit and plan the operations based around the front entrance to the Capitol building.”

Tarrio allegedly posted a voice note on Jan. 4, saying, “I didn’t hear this voice note until now, you want to storm the Capitol.”

Tarrio, who was then the national chairman of the Proud Boys, was arrested in Washington DC the same day on charges related to the Proud Boys’ theft of a “Black Lives Matter” flag that they burned on Dec. 12, 2020. As a condition of pre-trial release, Tarrio was banned from DC and prevented from being at the Capitol on Jan. 6, 2021.

Within one hour of Tarrio’s arrest, according to the indictment, Donohoe created a new group on the encrypted messaging app called “New MOSD Leaders Group.” A second group called “New MOSD Members Group” including 90 members was also reportedly created.

According to the government, at 7:15 p.m. on Jan. 4, Donohoe posted a message in the New MOSD Members Group stating, “Hey have been instructed and listen to me real good! There is no planning of any sorts. I need to be put into whatever new thing was created. Everything is compromised and we can be looking at Gang charges.”

Subsequently, according to the government, Donohoe wrote in the chat: “Stop everything immediately,” and then, “This comes from the top.”

The indictment signals that the government will argue that the Proud Boys played a critical role in the assault on the Capitol by highlighting members’ roles at critical points in the breach.

Shortly after 10 a.m. on Jan. 6, prior to Trump’s speech at the Ellipse, Nordean and Biggs led a large group of Proud Boys from the Washington Monument to the Capitol. Sometime around noon, the government alleges that Donohoe reported in a separate encrypted group chat that the group had grown to 200-300 Proud Boys. At about 12:53 p.m., Nordean, Biggs and Rehl led the group to the First Street pedestrian entrance near the Peace Monument.

The indictment notes a brief encounter between Biggs and Ryan Samsel, who has been separately charged with forcible assault on a federal agent and was the first person to walk up to a line of Capitol police officers and physically confront them.

Without naming Samsel, the new indictment against Proud Boys leadership notes: “Seconds before 12:53 p.m., Biggs was approached by an individual whose identity is known to the grand jury. The individual put one arm around Biggs’s shoulder and spoke to him. Approximately one minute later, this individual crossed the barrier that restricted access to the Capitol grounds. This was the first barrier protecting the Capitol grounds to be breached on January 6, 2021, and the point of entry for Nordean, Biggs, Rehl, Donohoe, and Pezzola.”

While Tarrio was not present at the Capitol, the indictment indicates he was closely monitoring events.

“Don’t f*cking leave,” Tarrio wrote in a social media post at 2:38 p.m., according to the government.

Another social media post at 2:57 p.m. suggests that Tarrio did not realize that the government building breached by the Proud Boys and other rioters was the US Capitol. According to the government, Tarrio wrote, “1776,” and then, “Revolutionaries are now at the Rayburn building,” apparently referencing the “1776 Returns” plan he received on Dec. 30.

The Select Committee to Investigate the January 6th Attack on the United States Capitol, which is conducting a separate investigation from the FBI, has looked into potential links between the Proud Boys and other actors like Alex Jones, the conspiracy theorist who hosts InfoWars.

Following a report that Jones told congressional investigators that he encountered the Proud Boys at a Hooters restaurant following a rally at the Georgia State Capitol in November 2020, Bertino posted a photo on his Telegram channel that shows Jones seated next to Tarrio. Owen Shroyer and Samuel Montoya, a host and contributor respectively at InfoWars, have been charged in connection with the Jan. 6 breach, but Jones has not been charged to date. 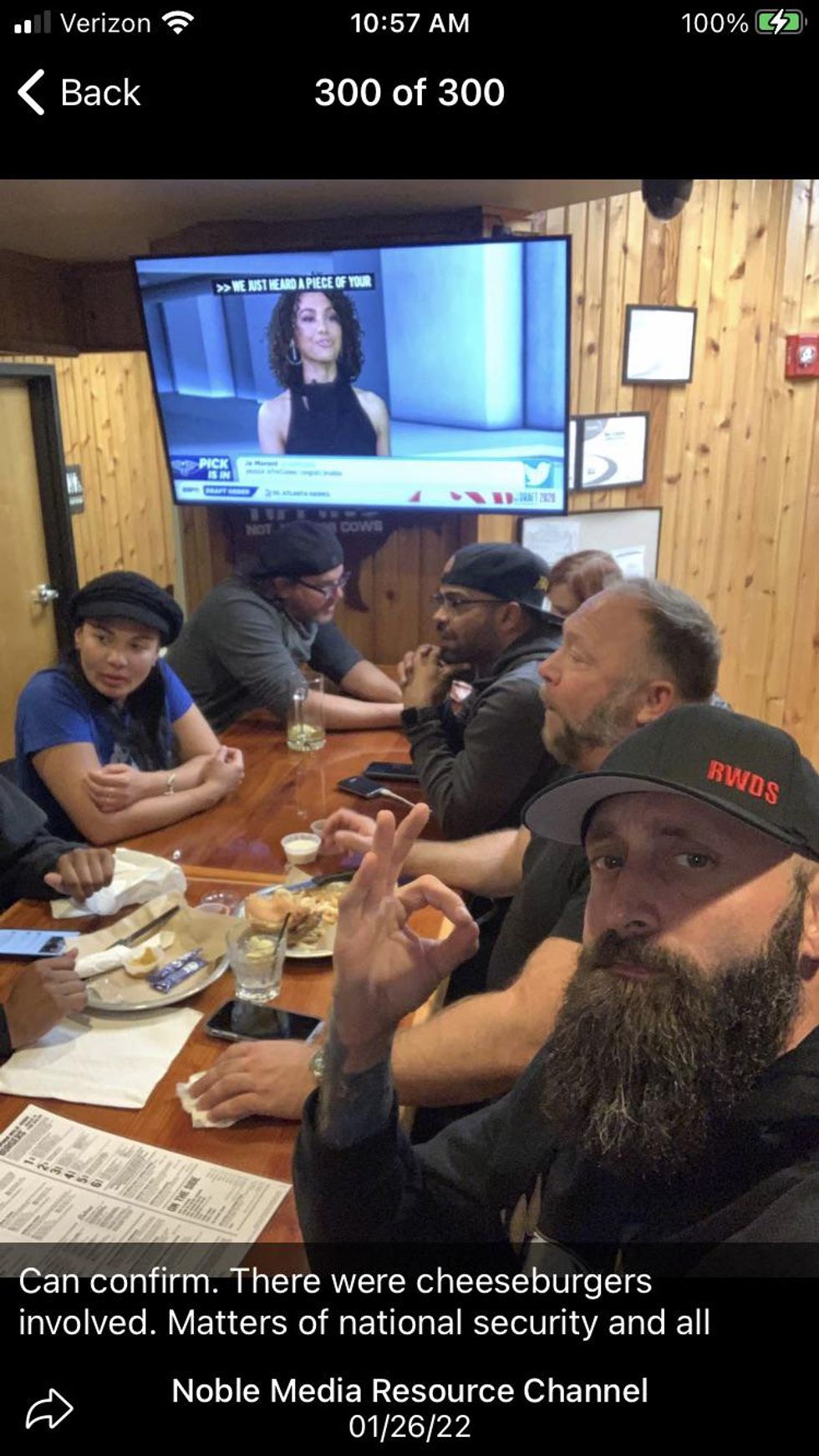 Prosecutors have also acknowledged they are aware of communication between the Proud Boys and the Oath Keepers, a far-right militia group that recruits military veterans and retired law enforcement, prior to Jan. 6.

Court documents filed by the government last March show that Kelly Meggs, the state lead for the Florida Oath Keepers chapter, bragged on Dec. 19, 2020: “Well we are ready for the rioters, this week I organized an alliance between Oath Keepers, Florida 3%ers, and Proud Boys. We have all decided to work together and shut this shit down.”

In another message on Dec. 22, Meggs reported to his fellow Oath Keepers: “Contact with PB and they always have a big group. Force multiplier.” In another message, he wrote: “I figure we could splinter off the main group of PBs and come up behind them. F*cking crush them for good.”

The filings do not reveal the name of the Proud Boys leader who communicated with Meggs, but both Tarrio and Biggs lived in Florida at the time.

Even more significant, the new indictment released today cites a meeting between the leaders of the two organizations on the eve of the attempted insurrection.

The indictment notes that after being released from jail on Jan. 5, Tarrio did not immediately comply with the order to leave DC.

“After being turned away from the Phoenix Park Hotel, Tarrio traveled to a nearby underground parking garage, where he met with Elmer Stewart Rhodes III, the founder and leader of the Oath Keepers, and other individuals known and unknown to the grand jury, for approximately 30 minutes," the indictment reads. "During the encounter, a participant referenced the Capitol.”