A man was filmed placing two pipe bombs outside the Republican and Democratic party headquarters on Jan. 6, and investigators suspect they were slated to go off and distract police from the attack on the Capitol. Police were able to deactivate the bombs. They never went off, but the Capitol was already understaffed and under attack.

CNN reported Wednesday that federal investigators are concerned that the bomber will strike again. The Department of Homeland Security issued an urgent bulletin on Wednesday warning that there is a very real threat that violent anti-government extremists will strike again. It's a sentiment that a Trump supporter echoed, saying ominously, "something's coming." 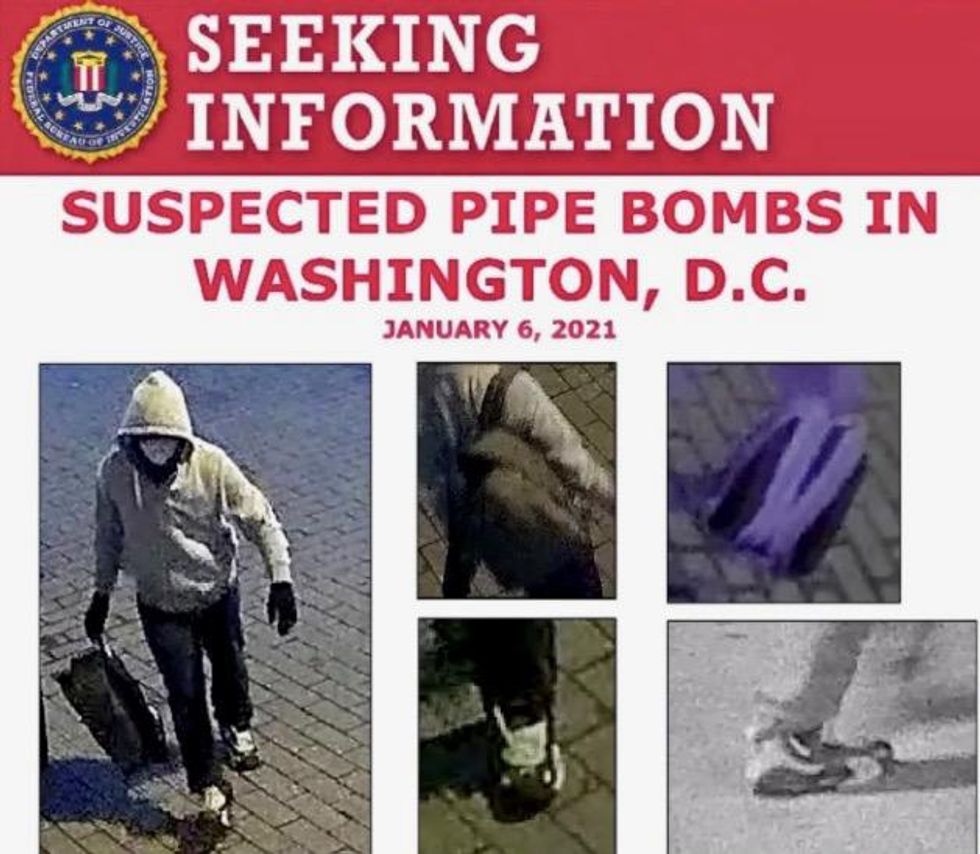 According to the report, tips have poured in about the insurrectionists that attacked the Capitol but the identity of the bomber is still a mystery.

"They could potentially be building more bombs right now," said ATF special agent Ashan Benedict in an interview with CNN. "This person obviously knows who he or she is, they may have told their story to someone else, and in the face of humanity, the fact that a lot of people could have been hurt if this device went off should be enough for someone to come forward so it doesn't happen again."

The device was eight inches long and made of galvanized steel, law enforcement officials told CNN. They were placed out in the open and discovered by a woman who was working from home. She had just put in a load of laundry when she saw the bomb.

"I just happened to look down by sheer luck," Karlin Younger told the Wisconsin State Journal. "And I noticed that by the recycling bin there was this tangle of wires."

Law enforcement confirmed that the bombs were active and set to go off with a timer but either it was set incorrectly or the batteries weren't connected properly.

While the FBI poster shows photos of the bomber from surveillance footage, they've pulled hours more footage from all over the area of the bomber.

Agent Benedict said that when the call came into AFT about a possible bomb found, his top deputy got into the car to drive over, something he only does in serious cases. While he was at the scene the attack began to unfold and law enforcement voices filled the radio.

"While we're standing there at this bomb scene, the radios from the uniformed officers I'm speaking with are going off in greater intensity. It's not just your normal radio transmissions -- folks are calling for help and their voices are raised," he said.

Read the full report at CNN. And if you have any information about the possible bomber, you can contact 1-800-CALL-FBI.